The live stream is now over, but you can watch the recording on Intel’s Facebook page.

The first keynote of IDF had plenty of announcements surrounding Intel’s sensors and chips. The biggest news of the night was the reveal of a new tether-free VR headset concept called Project Alloy. You can read more about it in our explainer. 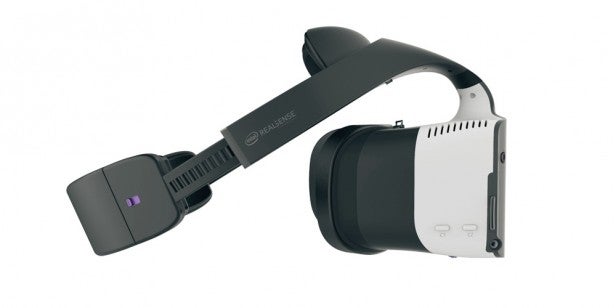 We also got a few (very few, in fact) details about Intel’s upcoming Kaby Lake. We saw two laptops running Kaby Lake on stage and we’re now starting to get an understanding of what they’re going to be capable of.

RealSense
Intel launched a new version of its RealSense hardware, called Euclid, a tiny all-in-one RealSense module that can connect to other devices such as Intel’s own custom-made robot that it demonstrated on stage. It’s essentially like giving robots super-powerful eyes. Scary.

Intel also launched RealSense 400, a tiny version of its original RealSense module. It doesn’t look small enough to fit into a smartphone, but it’ll certainly take up less space in the next generation of laptops to have it installed. 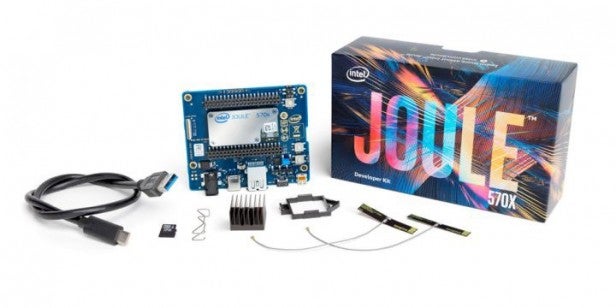 Intel Joule is a new ‘Maker Board’ similar to the Raspberry Pi but very much an adult piece of kit. It has, you guessed it, support for RealSense as well as a host of other hardware features to allow developers and inventors to quickly create prototypes of new products without having to manufacture custom hardware. It comes equipped with an Intel Atom T5000 CPU and 3GB of memory, as well as built-in Wi-Fi and Bluetooth 4.1.

Just because IDF is a developer event – clue’s in the name – doesn’t mean that it’s going to be devoid of product announcements and demonstrations. While Intel is obviously focused on its other businesses, including servers and cloud computing, the company is still keen to present itself as a consumer brand that can keep up with future trends. 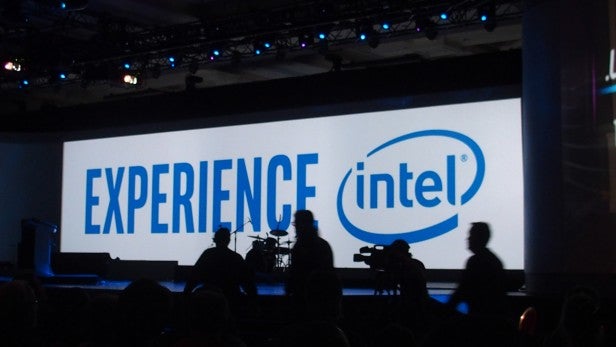 Last year, we saw everything from dancing robotic spiders to BMX riders and a whole bunch in between. Intel’s chips are found in devices from tiny sensors to laptops, desktops, and (to an extent) phones – things we all use every day. But the company still struggles to stand out in the Wild West of consumer electronics, having fallen behind the likes of Qualcomm and Samsung when it comes to brand awareness. With that in mind, any announcements relating to either mobile or wearable products would be pretty big news.

We might see more from Intel’s ridiculously fast Optane memory, which has the potential to turn solid-state storage into something as fast as RAM. This is no mean feat, as the reason why RAM is so fast is because it’s incredibly volatile, so to get the same speed as RAM into a long-term storage device would be extremely impressive.

Rumours are pointing towards a Q1 2017 launch, with product announcements being made at IDF. However, don’t expect to see this tech trickle down to consumer laptops for several years – right now, this will be kit for data centres only.

Away from these product announcements, expect Intel to highlight its prowess in the world of augmented reality, virtual reality, wearables, smart home products and drones. Many of the things shown on stage might never make it into the wider world, but they will represent the sort of technology manufacturers will be able to develop with Intel chips inside.

We’ll probably see more of Intel RealSense, too, which has finally started to come into its own. The 3D camera technology found a really handy use case in the form of a security feature in Windows Hello, and works brilliantly well on the Microsoft Surface Pro 4.

Finally, Intel will almost certainly talk about AI. Google, Microsoft and Facebook have all made huge pushes into various forms of AI, and while Intel is almost certainly part of the hardware of several of these projects, we’d expect it to show off a project of its own, if only to prove its master of its own destiny.

There’ll likely be even more announcements at IDF 2016, and while we don’t expect an Apple-esque ‘one more thing’, there may still be a major surprise. Stay tuned.

What are you expecting from the Intel Developer Forum? Let us know in the comments below.