Intel keeps trickling out details about the next generation of ultra-performance processors, its X-series range, which includes the new i9 core chips, and we’ve got all the latest price, spec, and release date information.

Update (August 8, 2017): Intel has announced full specs and pricing for the 18-core i9 Extreme Edition CPU that sits as the flagship chip in its new X-series range of processors.

According to Intel, the new 18-core processor will feature a base speed of 2.6GHz, and a Turbo Boost 2.0 clock-speed of 4.2GHz. It’s also possible to use Turbo Boost 3.0 to further speed up the clock-rate on the fastest two cores, giving a maximum clock speed of 4.4Ghz. That’s only marginally lower than the 4.5GHz achieved by Intel’s Core i7-7700K, the current top-end consumer desktop processor.

We also know that the 16-core model will be capable of speeds between 2.8GHz and 4.4GHz, and that the 14-core variant will have a base clock-rate of 3.1GHz.

We don’t have proper benchmark results yet, but Intel has offered up some of its own testing readouts. In Cinebench R15, the 16-core i9 chip managed a score of 3,200 – that’s paired with Nvidia’s GeForce GTX 1080Ti GPU.

Intel’s next-generation workstation CPUs will include a new model name, called Core i9. This forms the very top end of Intel’s X-series of procesors, which was previously topped by a load of different Core i7s.

Specifically, there are five new Intel Core i9 chips, all of which feature 10 or more cores, with the top-end i9-7980XE packing a ridiculous 18 cores – the most ever for an Intel desktop part.

The cheaper chips will rival AMD’s top-end Ryzen processors, featuring higher clock speeds and support for more PCIe lanes – both of which are important for high-end PCs that pack powerful components, like multiple graphics cards and high-speed storage arrays. 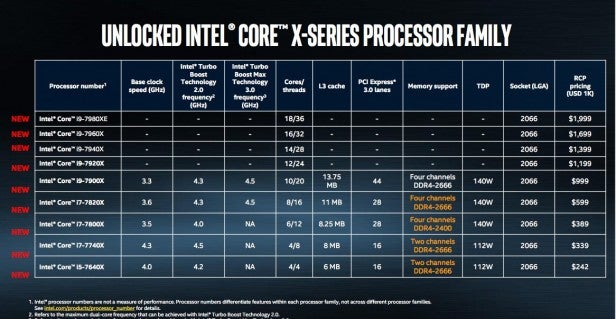 Stay tuned for more from Computex 2017 in Taipei as TrustedReviews will be providing updates live from the event.

Is Core i9 going into your next high-end rig or are you thinking Ryzen’s more your cup of tea? Let us know in the comments.