Intel has launched a new super-charged mobile version of its top-end Core i9 chip. Find out all the key info about the new CPUs below.

The new H-series CPUs sit between the company’s U-series – made for thin and light notebooks – and its powerhouse G-series units. The Intel G-series CPUs were unveiled in January and come with AMD Vega graphics. The H-series is designed for performance notebooks with a dedicated GPU, built for high-power creative work, triple-A gaming and virtual reality.

The flagship Core i9 is the most interesting of new H-series of CPUs. It will feature six cores, 12 threads and a 4.8GHz max turbo speed. It will also be the only H-series CPU to be fully unlocked for overclocking. It will support Intel Thermal Velocity Boost, which aims to help it intelligently increase its clock speed depending on the task.

Intel claims the CPU will offer a 29% overall performance boost, a hefty 41% gaming frame rate increase, and 59% faster 4K video-editing speeds compared to the top-specced 7th-gen Intel Core i7. Numerous companies have already announced devices that will feature the mobile i9, including the new Gigabyte Aorus X9.

You can see the full specs list for the new H-series CPUs in the table below. 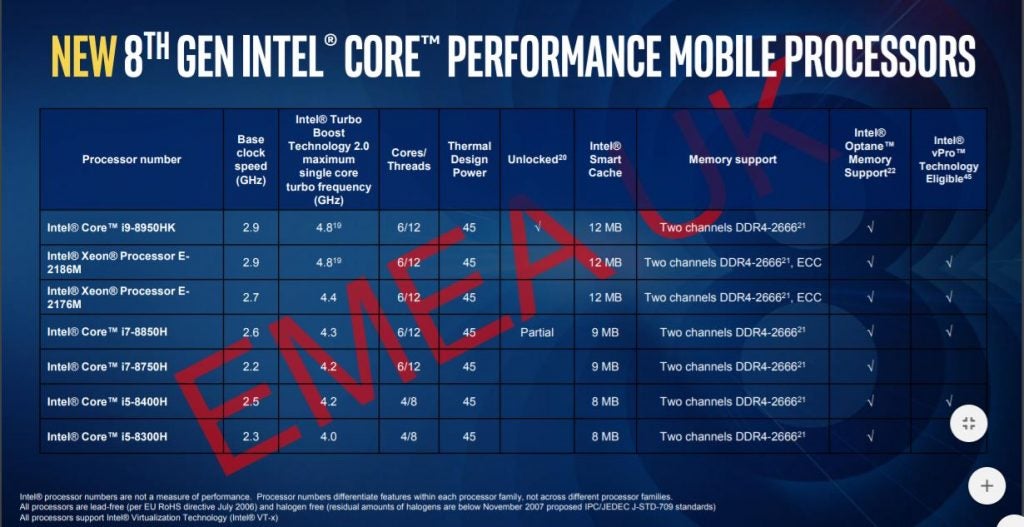 All the new CPUs use the same 300-series, 14nm chipset as other 8th-gen chips and support Intel’s Optane memory and wireless tech. Optane is a new technology that Intel unveiled at CES, which is designed to boost HHD data speeds. It makes disk storage systems more responsive.

According to an Intel spokesman, it’s “for people who want the capacity but don’t want to pay loads. HHDs will offer SSD-like responsiveness with the capacity of a hard disk”. Specifically, Intel claims the tech will offer 3.9 times faster data transfer speeds on desktop and 4.7 times faster speeds on notebooks. All Intel 8th Generation Core i5, i7  and i9 CPU’s featuring Optane will carry a new Core i+ brand. The Intel Wireless-AC 2×2 1 will reportedly be able to offer users a “faster than Gigabit Ethernet connection.”

Intel introduced a number of small updates to its U-series and desktop CPUs alongside the new H-range.

To start, Intel has announced that it will be bringing Iris Plus graphics to its U-series CPUs. The move won’t be a huge deal for gamers, but it does mean the mobile parts will get better for creative work such as video editing and 3D modelling.