Intel’s newest flagship desktop processor, the Intel Core i9-11900k, has officially launched. The Rocket Lake (aka 11th Generation) chip offers turbo clock speeds up to 5.3GHz and 19% IPC improvements over the previous generation, but what does that mean for its predecessor?

We’ve put the i9-11900k and 2020’s i9-10900k head-to-head, to decide which desktop processor offers better value for money. Read on to discover how the two processors compare and how they differ.

If you’re on the market for a new CPU, you should also check out our guides to the best gaming CPU, the best Intel processor and Intel vs AMD.

Intel is still stuck on the 14nm process, restricting the number of improvements the Intel Core i9-11900K can benefit from. The two chips share the same max clock speed, but the newer i9-11900k falls behind slightly at its base clock speed of 3.5GHz to the i9-10900k’s 3.7GHz.

One of the more obvious downgrades we’ve seen this year is the jump from the i9-10900k’s 10 cores and 20 threads to the i9-11900k’s 8 cores and 16 threads. While this won’t impact basic productivity, it could limit the flagship CPU’s performance on creative applications.

While a glance at the spec sheet might have you thinking the i9-11900k’s is a step down from its predecessor, Intel does have a few tricks up its sleeve in the Rocket Lake architecture, but more on that later.

If you’re interested in comparing the specs of the two processors, you can find the spec sheet for each below:

Our benchmark results show that the Intel Core i9-11900k is the more powerful processor of the two, which is largely thanks to the performance improvements found in the Rocket Lake architecture.

These include 19% more Instructions Per Cycle (IPU) than the Comet Lake processors for greater speed and efficiency, as well as new features such as support for PC Express 4.0. This doubles the performance ceiling for supported SSDs from 8GB/s to 16GB/s, helping to cut down loading times for both games and data transfers.

Other new features include Intel Deep Learning Boost for up to DDR4-3200, Resizable BAR and new overclocking capabilities.

But how big is the performance gap between these processors? We’ve included a snapshot of our benchmark results below: 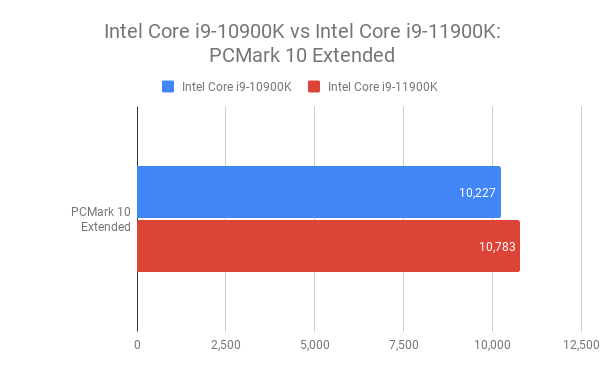 PCMark 10 is a good benchmark result for general performance. As you can see, the Intel Core i9-11900K steals the lead here, showing the value of the new Rocket Lake architecture. 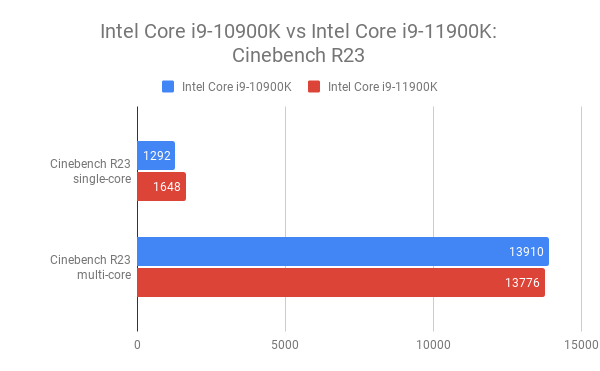 Cinebench R23 is a great benchmark tool to evaluate the performance for creative applications. While the 11th Gen Intel chip flexed its muscle for the single-core test, the i9-10900K ultimately won the multi-core round which is more important.

This shows the consequence of Intel lowering the core and thread counts for its latest processors. However, if you care about content creation, you’re best off checking out AMD’s Ryzen processors instead. 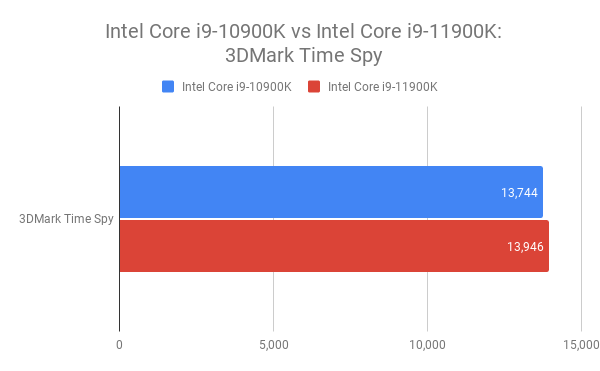 The 3DMark Time Spy benchmark offers a general look at gaming performance. The performance will of course differ on a per-game basis, but this result still offers an accurate representation of what we saw with the majority of in-game benchmarks.

That said, the 1oth Generation Intel processor was generally only a few frames-per-second behind the new 11th Gen CPU, so it’s very unlikely you’ll notice a major different in performance in real time.

It’s clear to see that the Intel i9-11900k is the most powerful processor thanks to the Rocket Lake architecture, besting its predecessor in every workload bar multi-threaded tests.

However, the generation-on-generation performance leap is not a big enough jump to justify swapping out the i9-10900K. The only real incentive to upgrade is for PCIe 4.0 support, but that only matters if you plan on buying a next-gen SSD as soon as possible.

So if you want the ultimate gaming performance available, get the i9-11900k. Otherwise, the i9-10900K offers a similar performance at a now discounted cost.