Ahead of the announcement of the new Intelligent Wi-Fi upgrade, Trusted Reviews got to spend a couple of hours being shown around Virgin Media’s new ‘Wireless Warehouse’, a purpose-built Wi-Fi testing facility, to get a better idea of how the cable ISP will test out software updates and new routers before beta testing and general release.

The facility comprises multiple rooms, all shielded against any exterior radio signals, so as to ensure that all and any tests take place in ‘clean’ controlled environments.

“We are fully shielded in here from the outside environment,” said Rick Pool, wireless performance manager for Liberty Global. Pool and his team are responsible for running the various tests that take place in and around the Wireless Warehouse, which has been his pet project for the last 18 months.

The main showpiece of the facility is a modular house, which sits inside what looks like an aircraft hangar. This building-within-a-building is designed to let Virgin Media simulate a large variety of homes, apartments, office spaces and buildings of all shapes. It’s a three storey high building with 18 rooms and a total floor space of 450 square metres, which is over three times the size of the average UK household. 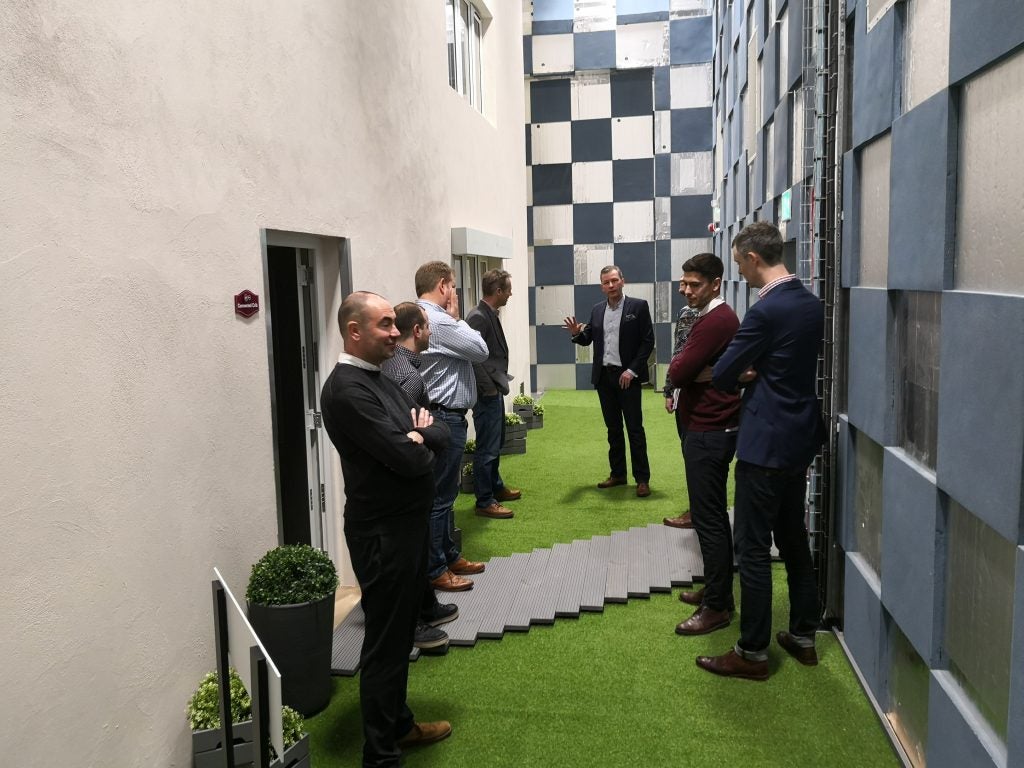 When asked how much the Wireless Warehouse cost to put together, Pool said “several millions,” and refused to give a definite figure when Trusted Reviews asked. He coyly said “enough millions,” but wouldn’t go any further than that.

“The way we typically test Wi-Fi is we can do it in two different ways, we can do it in a ‘science’ way, for which we use an anechoic chamber, essentially a Faraday cage or a shielded room, which is what we have here,” Pool said, gesturing at the ceiling and walls of the exterior building, which were coated in a checkerboard of blue radio-absorbent material and reflective metallic surfaces.

“Historically, we have used real houses, we have a big anechoic chamber in one of our facilities, fully anechoic, and the vision behind this, the Wireless Warehouse, was to bring that capability in under one roof and increase that capability as well, as we roll out our new products, as new code drops, we can bring all of that into an environment where we can test that.

“No Wi-Fi, no RF [radio frequencies] can get into this chamber and none can get out,” Pool said proudly. “That’s incredibly useful for testing, as I need to make sure I’m not seeing any impact from any outside interference.” 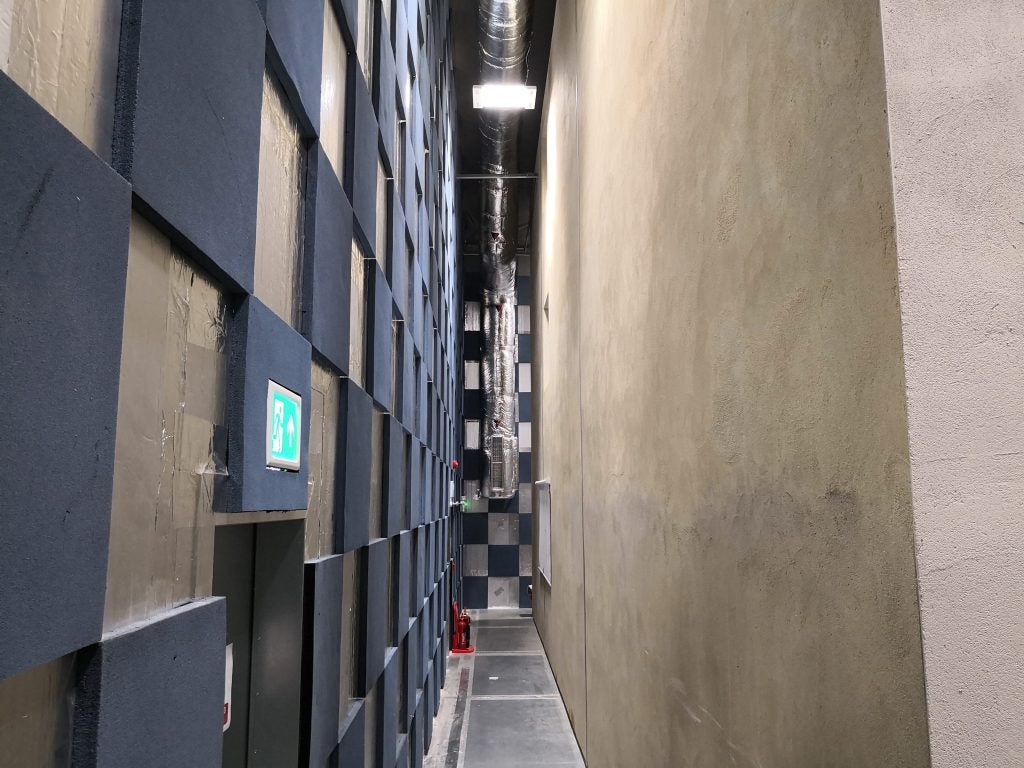 Metallic plating in the ceiling and floorboards is wrapped in a material that’s capable of “knocking out 95dB from the RF”, Pool says.

This, apparently, is the same material that rapid response units would use to cover suspects’ mobile phones when making arrests, to stop anyone from remotely bricking the phones. Indeed, when we first stepped into the room, the first thing we noticed was that the four bars of 4G signal on our phone suddenly dropped to nothing.

“Normally, the question at this point is, ‘Well, that’s fine, but no-one lives in an anechoic chamber.’ We live in flats, apartment blocks and built-up areas where there’s lots of other Wi-Fi,” Pool added.

“The great thing about this facility is once I know it’s ‘clean’, I can actually inject some interference myself, in a very methodical and repeatable way.”

During our visit, Trusted didn’t get to see any examples of simulated external interference, but we did see some examples of other internal Wi-Fi noise and obstruction.

The rooms of the house, which was set up to simulate a detached two-up two-down when we visited, were all kitted out with typical domestic appliances and furniture – in the living room, a 50-inch 4K TV sits proudly in the corner while in the bedroom, the same TV with a PS4 Pro and Virgin Media V6 set-top box sitting underneath takes pride of place. The kitchen is also fitted out with typical appliances like a fridge freezer, microwave cooker, as well as more 21st century connected devices.

Gareth Lister, head of connectivity at Virgin Media, said that in addition to testing things in clean environments, the idea is to simulate how routers and range extenders will behave when you throw a lot more real-world items into the mix.

“Kitchens are difficult places for Wi-Fi to propagate, you get a lot if interference from microwaves, particularly on the 2.4GHz frequency, when they’re working you see interference,” said Lister.

“In this kitchen we’ve also got a Sonos speaker going, we’ve got a smart kettle, a coffee machine, and smart washing machine. And though these are not necessarily taking up a lot of throughput, they can just cause issues for the Wi-Fi, not least having a load of metal piping and plumbing in here causing more interference.”

The walls of the house are non-insulated plasterboard but, if Virgin wants to simulate the effects of radio waves attempting to penetrate an insulated brick walls, it does this by stapling layers of a carbon metal compound mesh to the interiors of a room.

Developed for Virgin Media by a unnamed supplier from Germany (Virgin would not name the partner, or even allow us to take photos of the mesh) one layer of this material will simulate a standard brick wall, while two layers will simulate the thicker concrete walls. If testers want to simulate how Wi-Fi would propagate through and around the kind of solid stone walls you’d see in an old farmhouse or cottage, even more layers will be tacked on.

Instead of testers themselves walking around the house with laptops and phones, Virgin Media’s engineers will set up miniature railway tracks so robots can run through emulate people walking around instead.

This is done to ensure repeatability – even if you told the same person to follow the same pattern 20 times during a test, slight variations in strides means that data might not be reliable for testing – and also controlled data, which can then be compared to findings from future trials in beta tester’s homes.

As human bodies are mostly composed of water, and water is particularly good at absorbing radio waves near the 2.4GHz frequency, using robots to move client devices around the home means data collected inside the house is relatively ‘clean’.

As well as the main house area, Trusted Reviews got to see two anechoic chambers, which focused on testing out routers in controlled environments. 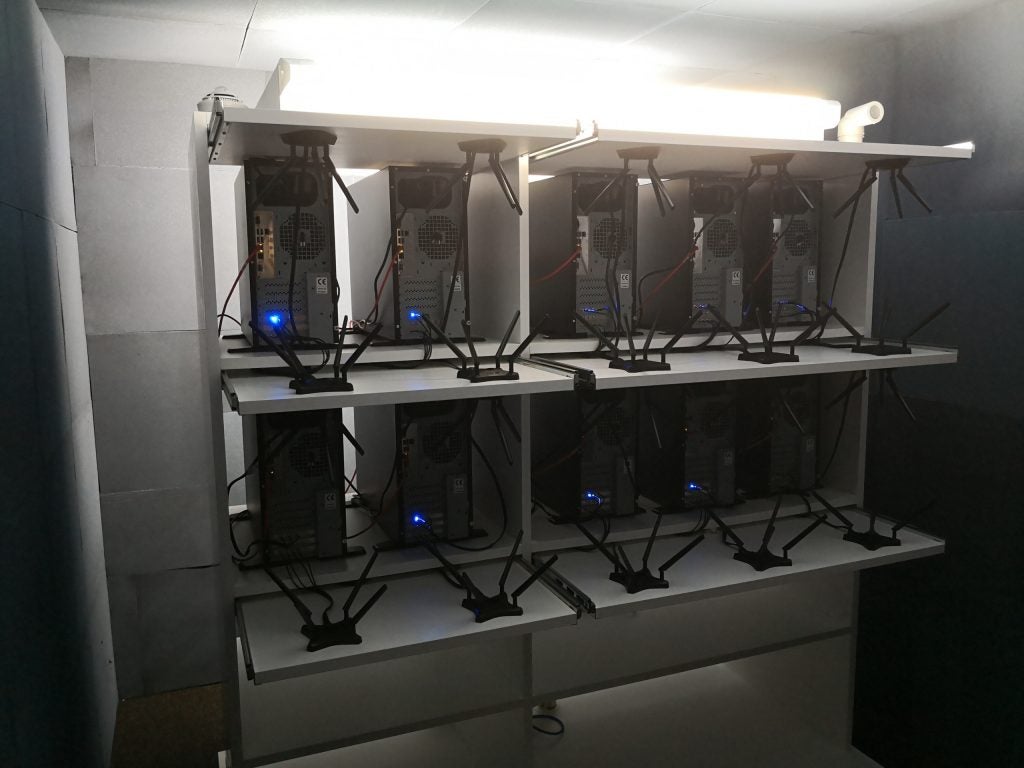 The first room was the smaller of the two and featured a bank of 10 PCs equipped with wireless network cards were set up opposite a Super Hub 3, which was mounted on a turntable.

The purpose of this room is to simulate the Wi-Fi antenna profiles of a wide range of devices, from an iPhone X to a second-gen iPad, to see how future routers can handle a variety of client devices using up to date and legacy Wi-Fi antennas, in isolation and all at once.

Each of the 10 systems in the image above are essentially virtual laptops, phones, tablets, IP cameras – Virgin Media says that they can emulate over 10,000 wireless clients with this system at any one time.

While that’s obviously overkill for testing out consumer-grade systems, when testing out routers, Pool’s team will typically simulate 30, 50 or 100 virtual clients in this sealed chamber, with more profiles added for business systems.

Rounding this out is a test which would see all of the physical Ethernet ports of a router hit with 1000Mbps of simulated traffic hitting each port, and then the simulated wireless traffic added on top of that.

Sitting an access point on top of a turntable allows the teams to see how a router’s antennas behave at different angles, and how signals propagate around the device, to test for any anomalies, such as signals from a right-hand antenna not being as strong as others in the device. 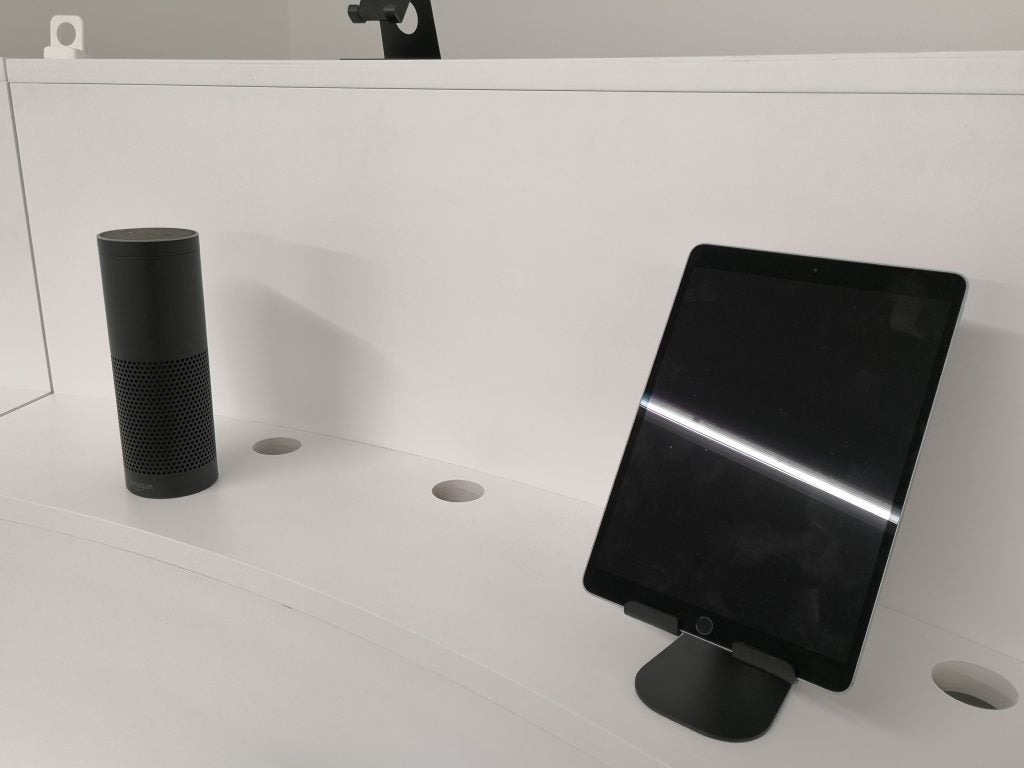 Finally, we got to see what’s called the ‘inter-op room’. This very much looks like a kind of consumer tech gladiatorial arena, where various devices from an Amazon Echo, Xbox One S, and laptops from HP, Apple, and Asus, were all propped up on stepped shelves, with another Super Hub 3 set up in the centre. This room can house up to 180 client devices, but typically, 100 devices are used during tests.

Again, a range of devices will be tested alone, in tandem, and all at once, to see how not only the hardware, but the software will behave.

It might well be, for example, that someone is using an Android phone that’s going to be stuck on Android 8.0 Oreo and that customer won’t be upgrading their phone for a while yet.

“If we know this client from a silicon level, can only cope with 100Mbps, but this one over here can cope with 200Mbps over WiFi, we can actually push those data rates to those devices to see if they can cope with it,” said Pool.

The facility is set up to be automated, so that every device on the stands can be remotely accessed, powered on, and connected to an access point.

“Having an engineer literally come in, make sure these devices are charged up, going to the settings and connecting to the Wi-Fi so we can run a test would take hours. Historically, this type of test would take weeks or months. We have full automation suites nicely hidden behind these shelves, leveraging machine learning, intelligent AI, to basically emulate what a customer might do, and play that back.”

A test to run a full interoperability suite on 100 devices would normally take two to three weeks and require a team of around six engineers to run and monitor everything. Now the entire process can be done by one person in 24 hours.

Pool insists that the Wireless Warehouse, which opened late last year, has only just begun to have an impact on Virgin’s Wi-Fi testing regimen, and the work on the Intelligent Wi-Fi update is just the beginning.

As and when new products, like, say, the Samsung Galaxy S10 hit the market, they’ll be brought to the inter-op room for testing, so that whenever Virgin Media rolls out future updates, their routers will be better at provisioning Wi-Fi for more advanced phones, tablets and laptops.

Virgin Media has attracted a not entirely undue share of criticism over the performance of its own-brand hardware over the years, compounded by the fact that it’s not possible to entirely switch out what you get with the service with a DOCSIS modem of your own. Sure, you can turn on modem-only mode and connect your own router or mesh system, but that’s not an elegant or space-efficient solution for everyone.

Speeding up the testing process means that not only will Virgin Media be able to better prepare future hardware like the Super Hub 4 to meet customer expectations, but it can roll out updates like Intelligent Wi-Fi to the 75% of its broadband customers using the Super Hub 3 in the meantime.

Update: This article was amended to clarify that Rick Pool is wireless performance manager for Liberty Global, not Virgin Media.

What do you think of Virgin Media’s Wireless Warehouse? Let us know @TrustedReviews.