YouTube hardware modder Shank Mods has struck again. Previously known for sticking a whole Wii into a tin of Altoids, and making a portable Wii/GameCube hybrid, the modder’s latest challenge was sawing a GameCube WaveBird controller in half, and turning into a working set of Joy-Cons for the Switch.

And he’s only gone and done it.

This, as the modder says, is not a task for the faint hearted. It took him several months and required lots of 3D-printing. But yes, the result is a set of GameCube shaped Joy-Cons which function exactly as the official Joy-Cons do. When linked together in a custom gamepad dock, they look virtually indistinguishable from an original WaveBird… barring the funky purple paint job. 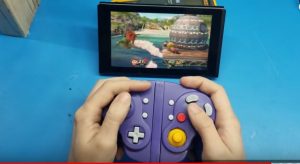 Despite the general difficulty of the project, Shank Mods was handed one huge bit of good fortune: the centre of the WaveBird is exactly the same height as the Nintendo Switch.

All the same, this obviously isn’t as simple as sawing the pad in half and adding mounting rails. All the internals have to match the new functionality, but the results speak for themselves. Not only do all the buttons work in the same way old school GameCube players would expect, but Switch functionality is replicated where possible: there’s HD rumble, gyro and even amiibo support. They even charge through the rails when docked.

Sadly, Shank Mods won’t be making and selling these, and not because of the possible wrath of Nintendo’s legal department. “They were a pain to make, and I will not be making another set,” he said. Fair enough.

Hopefully someone at Nintendo is watching the video and having a good think about the possibilities. While we only have retro NES and SNES games on the Switch at the moment, we know the hardware is capable of running a couple of Wii games, so hopefully it’s only a matter of time before we see Super Mario Sunshine, Pikmin and Paper Mario 2 make the jump from tiny disc to Nintendo eShop download.