IMAX has built its first virtual reality centre in the UK. It will be a part of the Odeon multiplex cinema in Manchester’s Trafford Centre.

We’re no strangers to VR, having tested the HTC Vive, Oculus Rift and PlayStation VR – but this is the first time anyone in the UK has come up with a venue dedicated to virtual reality.

Ahead of the public opening, I went to Manchester to see for myself what IMAX VR is all about. I got to look around behind the scenes, try the various experiences on offer, and chat to IMAX about the future. Here’s what you need to know.

What is IMAX VR?

First things first: we’re not talking about movies. It’s easy to see ‘IMAX’ and think of the cinema, but get that out of your head right now. The emphasis here is very much on the ‘VR’ bit. Like other virtual reality experiences, this is mainly a gaming activity.

The more complex games use motion tracking and involve a bit of waving your arms about. The more sedate experiences have you as passenger in scripted scenarios.

There are no theatrical performances, and the narratives (if there are any at all) are basic at best. There are no 360-degree films, at least for now.

IMAX comes into the equation by providing the VR centre concept. This is simply a place you visit to try out virtual reality. Of course, you can get VR setups in the home, but the point of this is to offer a dedicated space where you don’t need to worry about rearranging your furniture or locking your pets or children in the other room.

IMAX VR also stands out by offering props such as weapons, force feedback vests, mechanical chairs – things you probably won’t have in the home. 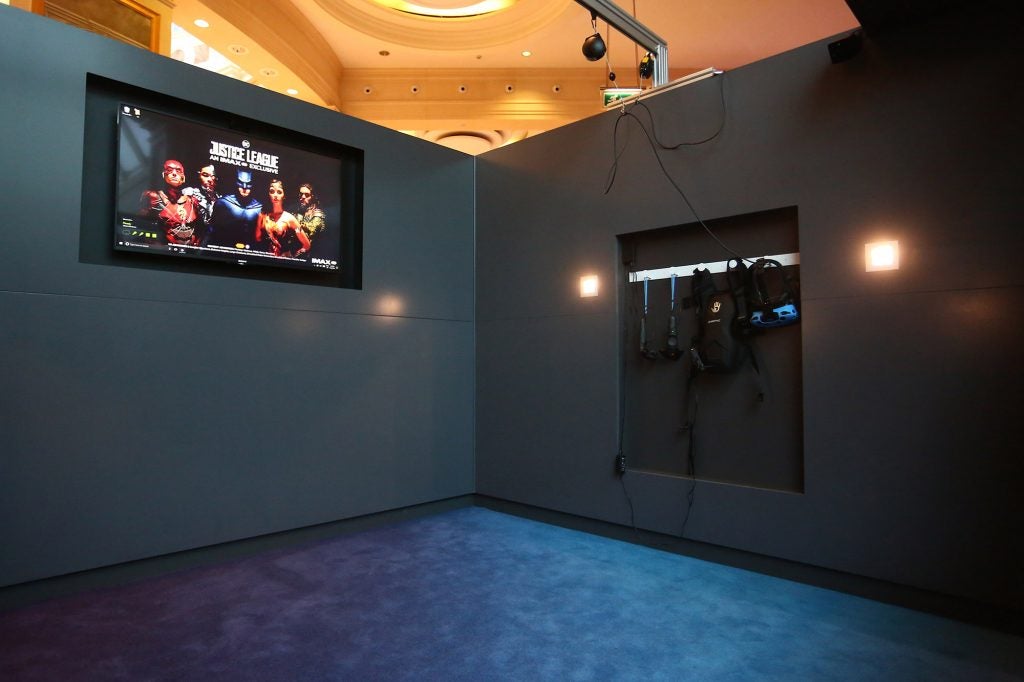 The space is made up of separate pods, which are 10 x 10ft rooms each dedicated to different VR titles. Each pod contains a VR headset and controllers – currently HTC Vive units, with the flexibility to upgrade to the next best thing to come out.

Depending on the title, you will either sit down or walk around. In the rooms where you walk around, a pulley system comes down from the ceiling for cable management. Each pod also has a tiny locker for your belongings. All to keep you from tripping over.

The pods are open, so staff can run in and help you if you have problems. It also means your friends can stand outside watching a separate feed of whatever you’re seeing, and cheer or mock you as you play. IMAX was keen to emphasise the social element as a core value of these centres.

Then there’s the content. In a bid to differentiate itself from home-installed VR systems, IMAX VR is leveraging its relationships with film studios and developers to ensure IMAX receives exclusive content. This is technically something you could play at home on your own HTC Vive, but IMAX is tackling this with periods of exclusivity, in the same way that you’ll see films in cinemas before they come out on disc. 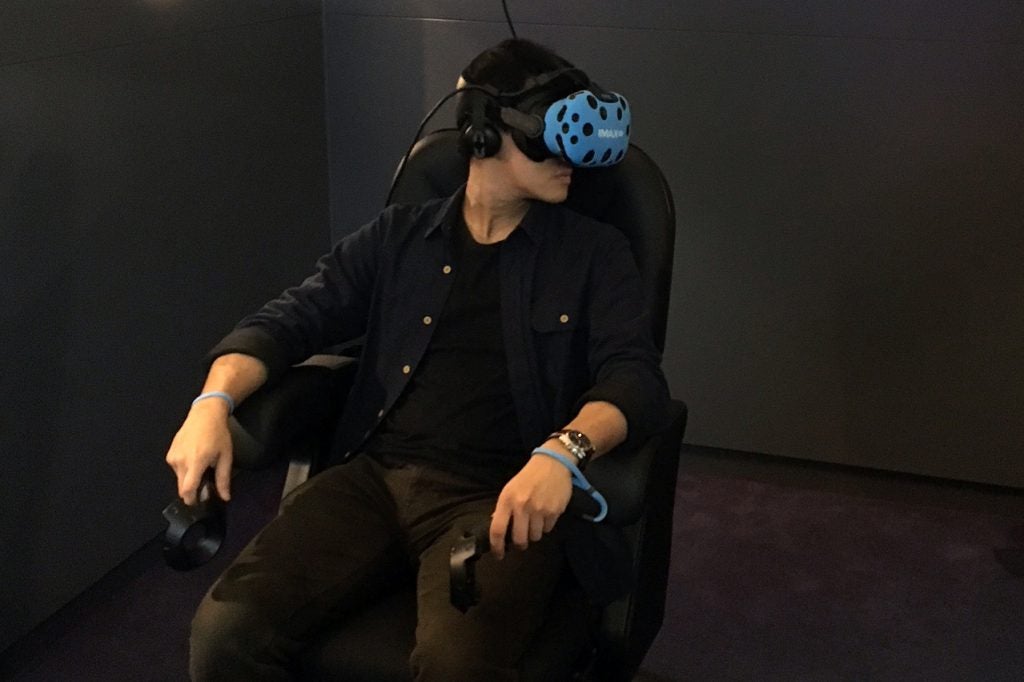 During my visit, the big exclusive was the Justice League game, released to coincide with the movie. This best captured the IMAX VR difference for me, as it included props, and it’s nothing I’ve previously played on VR at home.

First I went for the Batman experience, which had me in the seat of the Batmobile. Using motion-tracked controllers isn’t new, but I’d never done that with a mechanical chair before. That thing really throws you about, which helps to make the experience all the more convincing.

I’m no stranger to driving Batmobiles, having done so in plenty of videogames, but doing so in IMAX VR was the most immersive experience yet. As with all VR, you are always at risk of a sensor glitch – my Batmobile initially kept going into a wall, but a quick reset sorted that out. 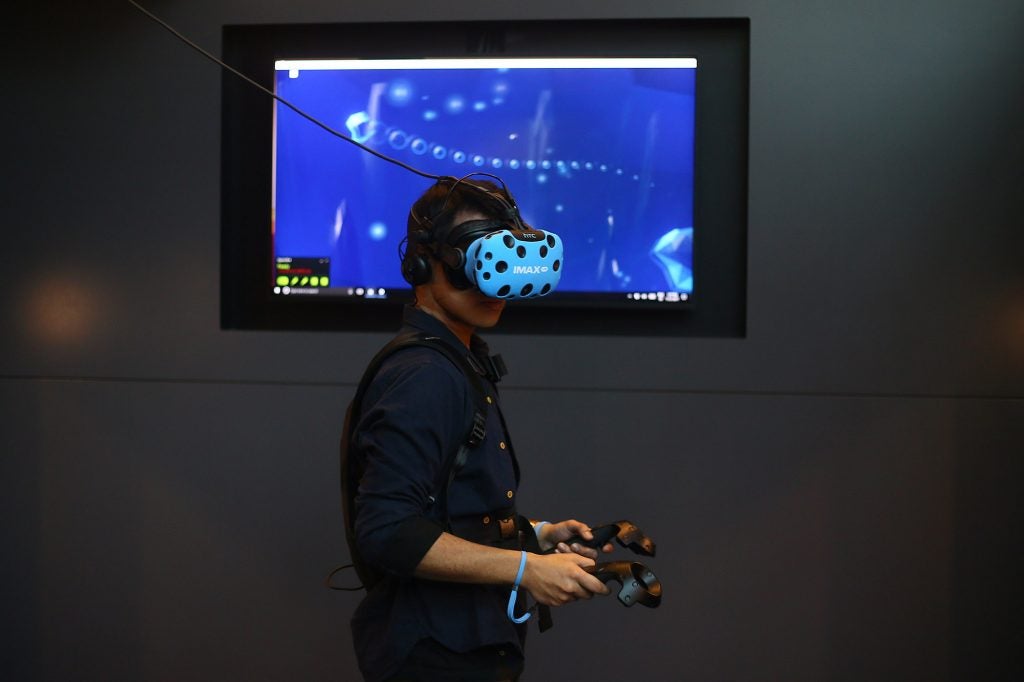 Next up, I played Wonder Woman. This a 360-degree hack-and-slash kind of game, one that needed me on my feet, so I was taken to another pod that didn’t have a big chair in it. Instead I was given a force feedback vest, which vibrates when you’re ‘hit’ in the game. I really enjoyed this one, not just because I was told I’m a natural at VR swordplay, but because I could swing away without fear that I might accidentally punch a wall or walk into my coffee table. It turns out having a dedicate VR space makes VR that much more liberating.

Both of these experiences did succeed in making me feel mildly heroic. I can imagine this being a real treat if you’ve just come out from watching Justice League and are in the mood to fight villains. It’s not cinema, but VR serves as a damn fine cinema accessory.

My final experience wasn’t a movie tie-in, and I had no controls to play with. I just sat in the mechanical chair while I was transported into space for a ride. I’ve done something similar before – the Tim Peake Space Descent VR at the London Science Museum – but that didn’t have the chair, and there is no substitute for being physically thrown about. It wasn’t quite the weightlessness of space, but when the shuttle pivoted so that the Earth was above me, the chair did fool me into thinking about seatbelts. 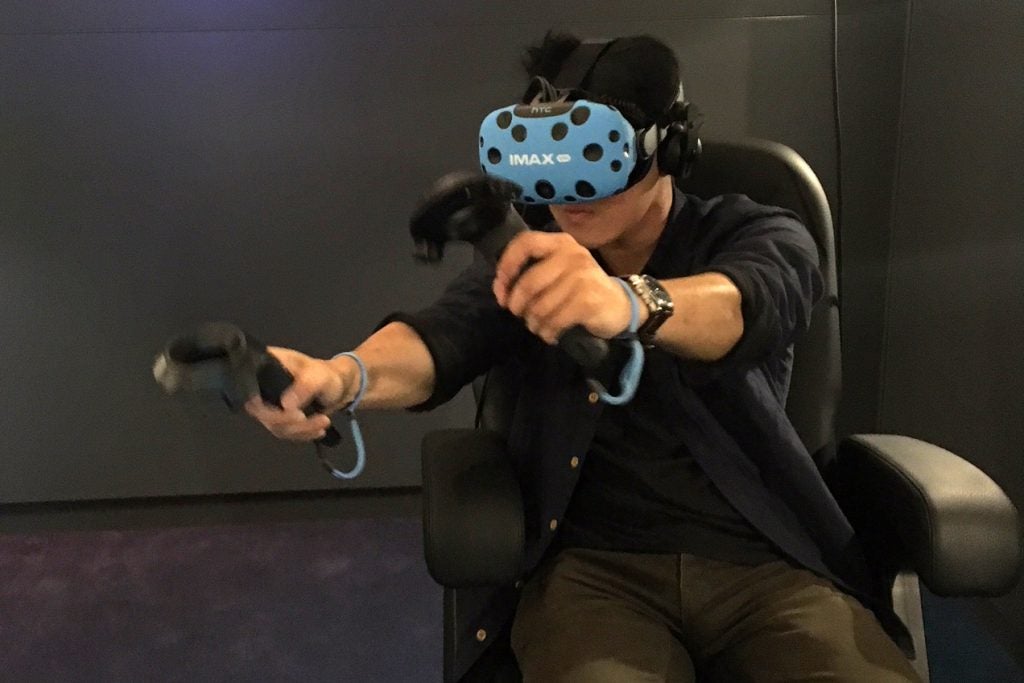 To figure out where IMAX VR fits into our existing tech world, I sat down with Giovanni Dolci, IMAX’s managing director in Europe and Africa.

He is keen to point out that VR is not supposed to replace films, as many have suggested. There are similarities, but the IMAX VR is really there to supplement the cinema business.

“A lot of people ask me if I think VR will replace cinema, and my answer is no. The type of experience is different. VR is all about interactivity. I also think you can’t take away the pleasure of watching a movie on the big screen in a social environment with your peers, the human contact of being in a crowd.

“Of course, there are things that go hand in hand. There are opportunities for more cross-contamination between the two. Just look at Justice League releasing in IMAX and then the VR experience coming out in the VR centres. You will see more and more content in VR related to the movies that are in the cinema. They are complementary but distinct experiences.” 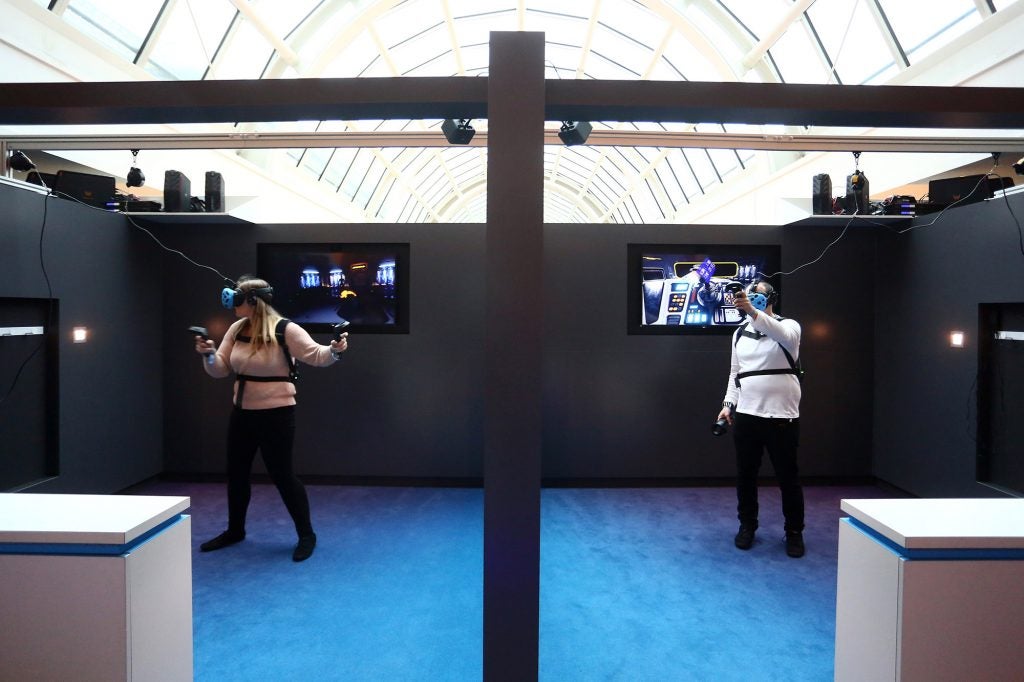 I ask Giovanni what exactly IMAX VR is proposing in terms of logistics and cost. A cinema transaction is very simple – one ticket per person, per movie – while VR is highly variable and a £10 ticket might not always be appropriate. He tells me that research is the entire point of launching this IMAX VR centre, along with four others in Los Angeles, New York, Toronto and Shanghai. They’re still figuring things out.

“We are still exploring pricing models, to be honest. You could go with your friends, and each of you could buy one ticket for one VR experience, and then you alternate or you do some interactive experiences together.

“I think we’ll see more combo tickets. We’ll be testing tickets for multiple experiences at once. If you buy a ticket for three experiences per person, that will give you a very decent amount of time to enjoy yourself with your peers.

“We are really focusing on the social element. VR at home can be a pretty individual and lonely proposition. You can see our pods are designed in an open way, so your friends can look at you. It can be a group activity.” 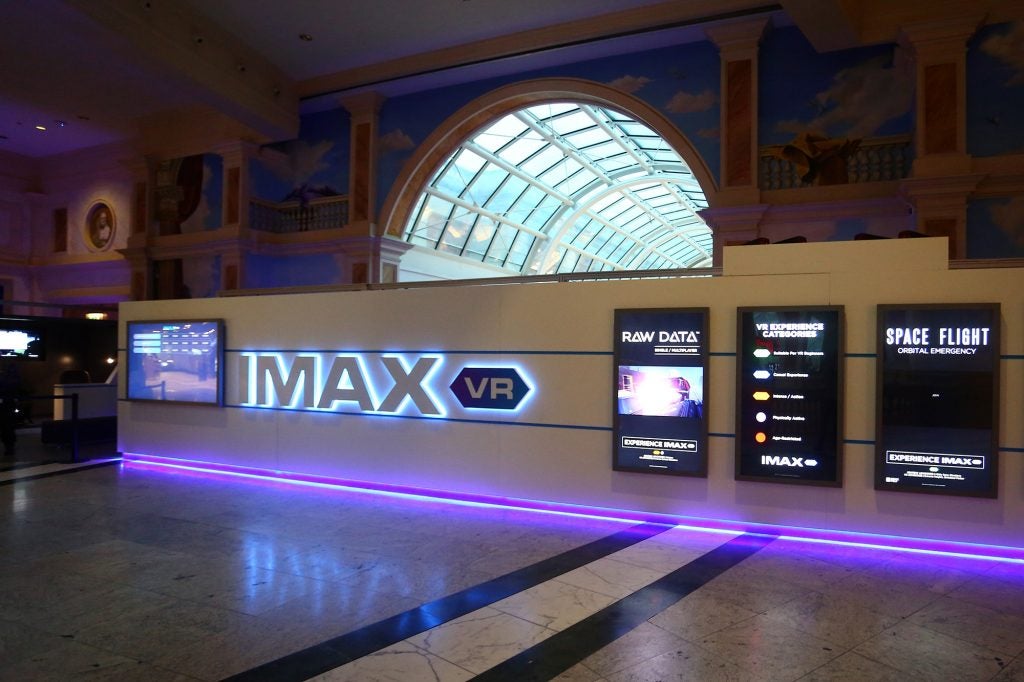 Pricing isn’t the only thing IMAX is trying to figure out. They want to learn where VR can fit in the entertainment equation, and whether it can ever be mainstream enough to match other group activities such as bowling. One thing is for sure: the good old IMAX cinemas aren’t going anywhere.

“For the foreseeable future, our core business will continue to be IMAX theatres with normal movies. We don’t think VR could generate the same volumes of business as we do in a cinema. A cinema is very space-efficient. You could have 450 people in an auditorium for two hours.

“But VR is more time-efficient. We can have a better turnaround. I don’t know where this could lead but we’re determined to find out. We want to better understand, for specific sites, how many customers we can bring from the existing cinema base, or how many people we can attract that wouldn’t have gone to the cinema.”

It seems feedback from other IMAX VR centres around the world have been very positive. The centre in Los Angeles has attracted 50,000 customers since opening in January, and approval ratings are at 90%. More interesting is that, in New York, 54% of IMAX VR customers also bought IMAX cinema tickets.

Having tried IMAX VR for myself, I can see it working as a public proposition. In many ways it’s VR done right – it makes a world of difference having a dedicated space and props to aid immersion. A VR sanctuary also removes the biggest obstacle to date, which has been getting people to pay up for an expensive system that’s also a pain to set up. It now has much more social implications, and that is only going to be helped out by the cinema tie-ins.

VR doesn’t need to ride on the coattails of Hollywood, but it really hasn’t suffered for it.

Will you try IMAX VR? Let us know on Twitter @trustedreviews