The press days of the IAA 2017 Frankfurt Motor Show are finally over, and the car brands were out in force. Here you’ll find all the details, including IAA 2017 news, dates, schedule – and cars, of course.

The Internationale Automobil-Austellung – commonly known as the Frankfurt Motor Show – is always an exciting time for car fans, and we’ve seen some seriously cool vehicles from some of the world’s biggest automakers, including BMW, Audi, and Mercedes-Benz.

Read on for all the details, and be sure to check out our best concept cars round-up from the show too.

IAA 2017 News: The latest news, announcements and cars from the Frankfurt Motor Show

As the name suggests, it’s got a powerful V10 engine and operates on a rear-wheel drive system – unique to this model alone. It’s 50kg lighter than its predecessor, starts at £110,000, and will only be available to 999 customers globally. 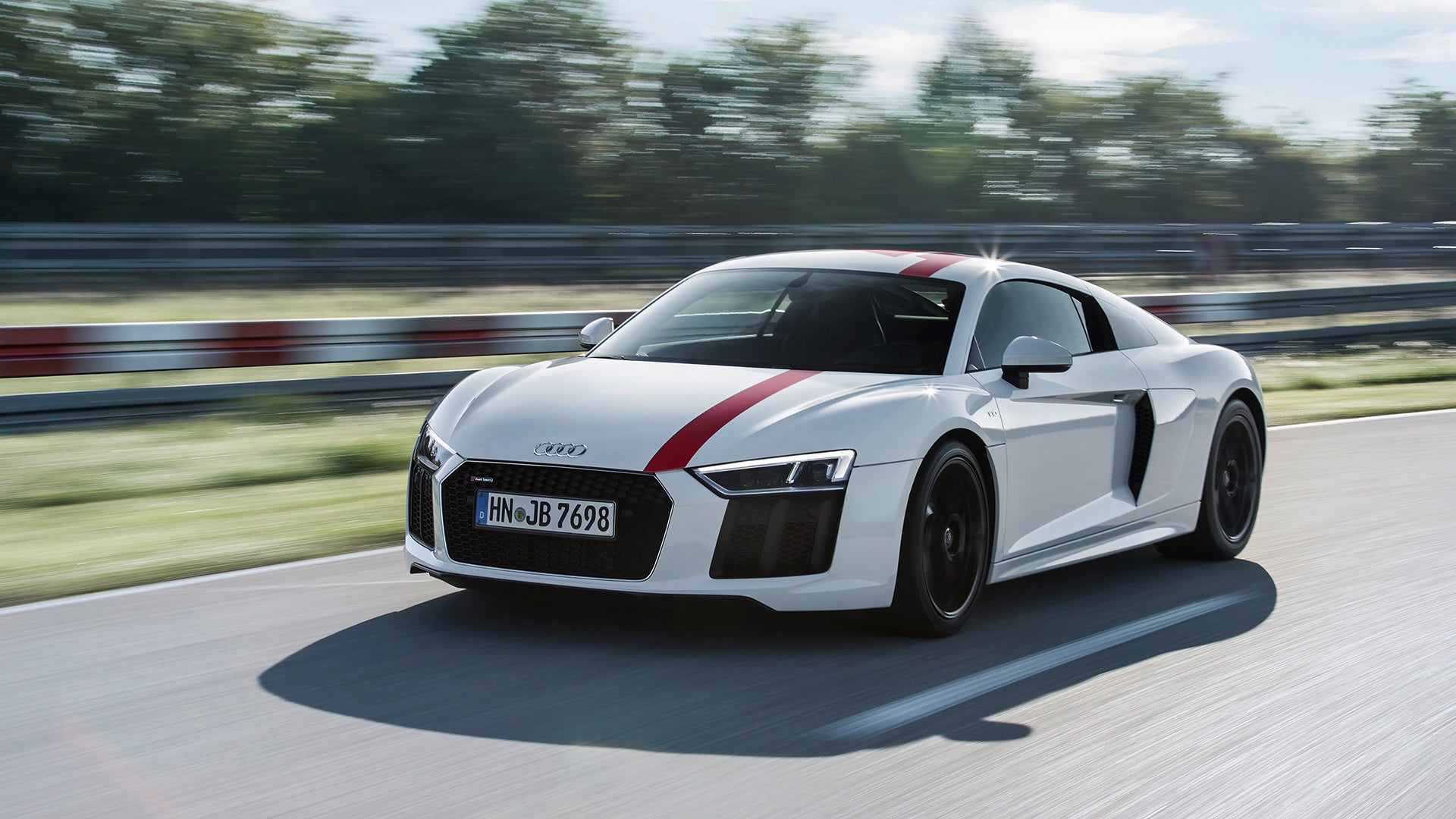 The German carmaker also showed off its vision for the future of driving in the form of the Audi Aicon. A somewhat wacky concept car, the Aicon has no pedals or steering wheel, instead carting round passengers in fully autonomous fashion.

Audi hopes that one day, rich people will sit in the back of the Aicon and enjoy luxury comforts, like hi-res movies and chairs that can move around the back of your car. Fancy, eh?

Bentley used the IAA 2017 motor show to finally debut its all-new Bentley Continental GT. The third-generation grand tourer replaces the old model, which ran/runs from 2011 to 2018.

We’ve not got pricing yet, but we’re expecting the new car to arrive on driveways in the UK in the first quarter of 2018.

In a statement, Bentley CEO Wolfgang Dürheimer described the car as a “defining moment” for Bentley Motors. It’s easy to see why; the meaty tourer can output an impressive 626bhp, and promises a 0-60mph time of 3.6 seconds, as well as a top speed of 207mph.

BMW managed to secure plenty of hype around its new concept car, the BMW i Vision Dynamics.

Formally debuted at the Frankfurt Motor Show, the BMW i Vision Dynamics is an all-electric vehicle that sits between the existing BMW i3 and BMW i8. 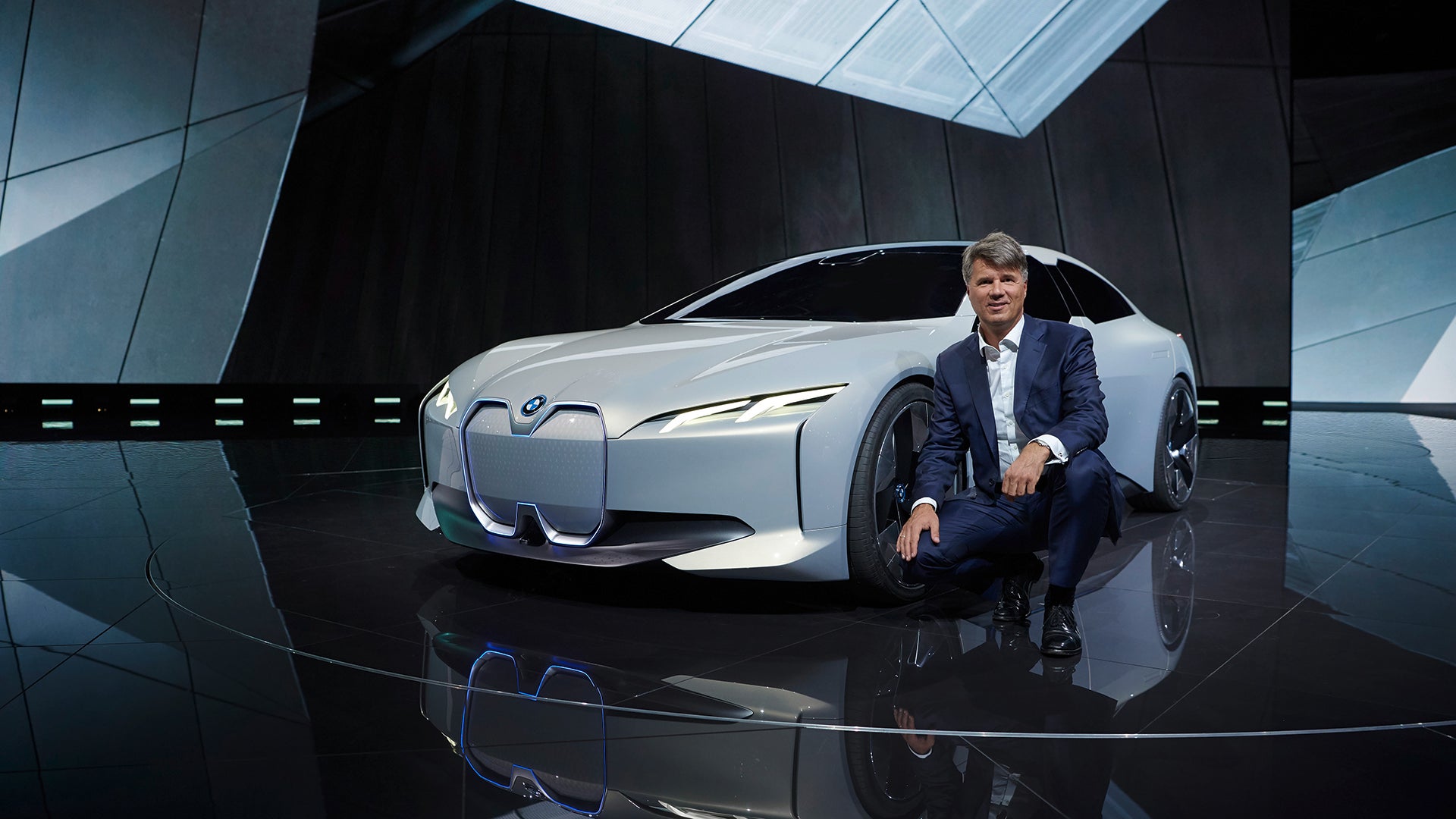 It boasts a range of 600km (373 miles), manages a nippy top speed of over 200kmh (120mph), and can accelerate from zero to 100kmh (62mph) in just four seconds. Unfortunately, there’s no word on when (or even if) this car will become a production model, so exercise patience for now.

The Bugatti stand was drawing plenty of attention at the Frankfurt Motor Show, largely on account of the Bugatti Chiron stationed there.

If you missed the hype, here’s the deal: this vehicle set the production car record for accelerating from zero right up to 249mph (400kmh) and then back to zero again. It managed that impressive feat in just 42 seconds, which is probably quicker than the time it took me to write these two paragraphs.

“What?!” I hear you cry, “why is Disney there?” It’s a fair question, because Disney doesn’t even make cars. But it does make Cars.

And it turns out that the Cars it does make, are made from cars themselves. Car-ception, if you will:

Jaguar’s big announcement at IAA 2017 was the Jaguar eTrophy, a new all-electric race series to support the core FIA Formula E championship. Described as the “world’s first international championship for production-based electric cars”, the eTrophy series is set to begin in late 2018. 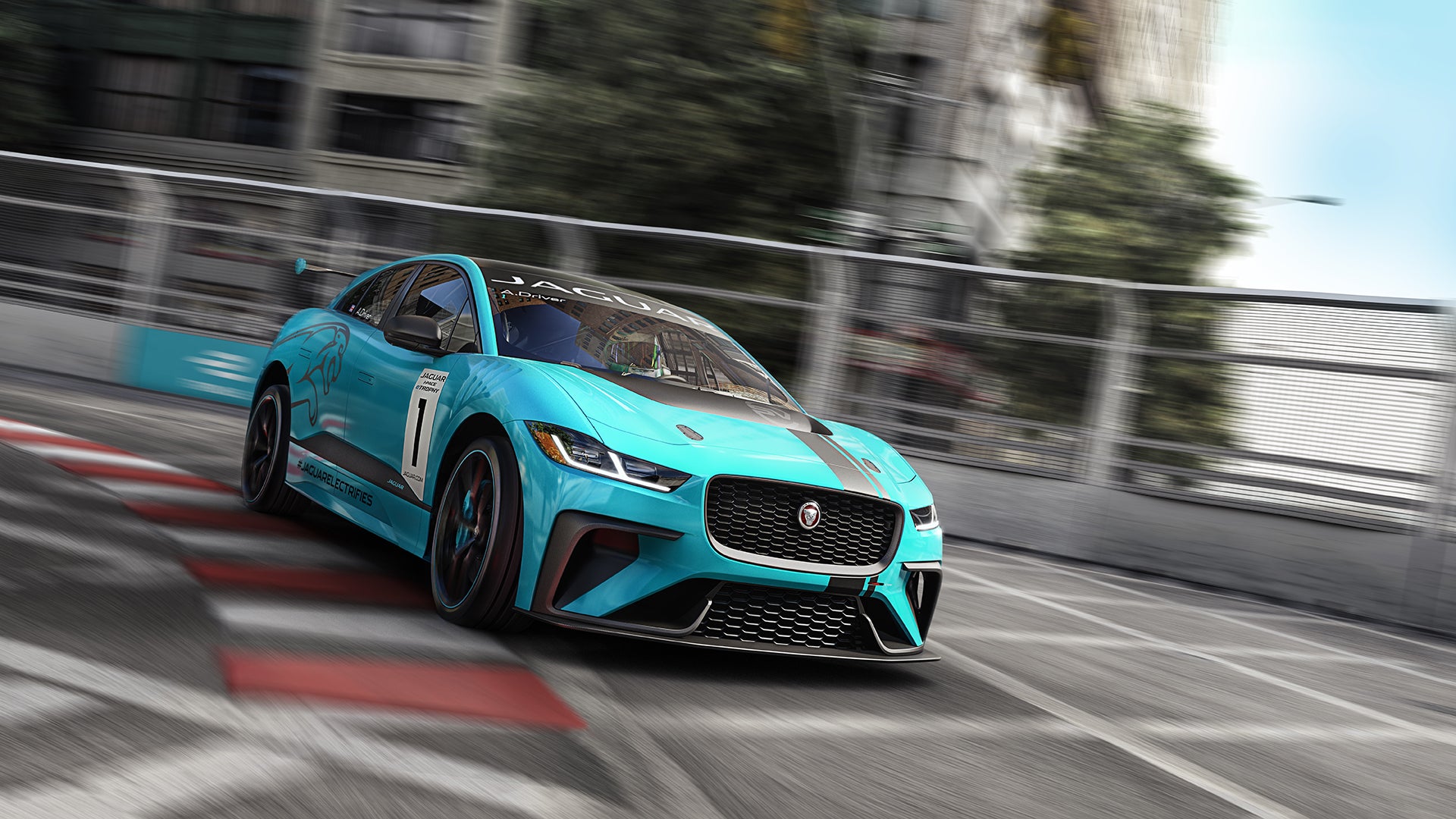 Alongside this announcement, Jaguar also revealed that it would be creating its own race car, based on the design of the upcoming electric Jaguar I-Pace. The modified motor will be dubbed Jaguar I-Pace eTrophy, and is being developed by Jaguar’s secretive Special Vehicle Operations unit in the UK.

The Land Rover Discovery SVX is the headline news from Land Rover at this year’s Frankfurt Motor Show. 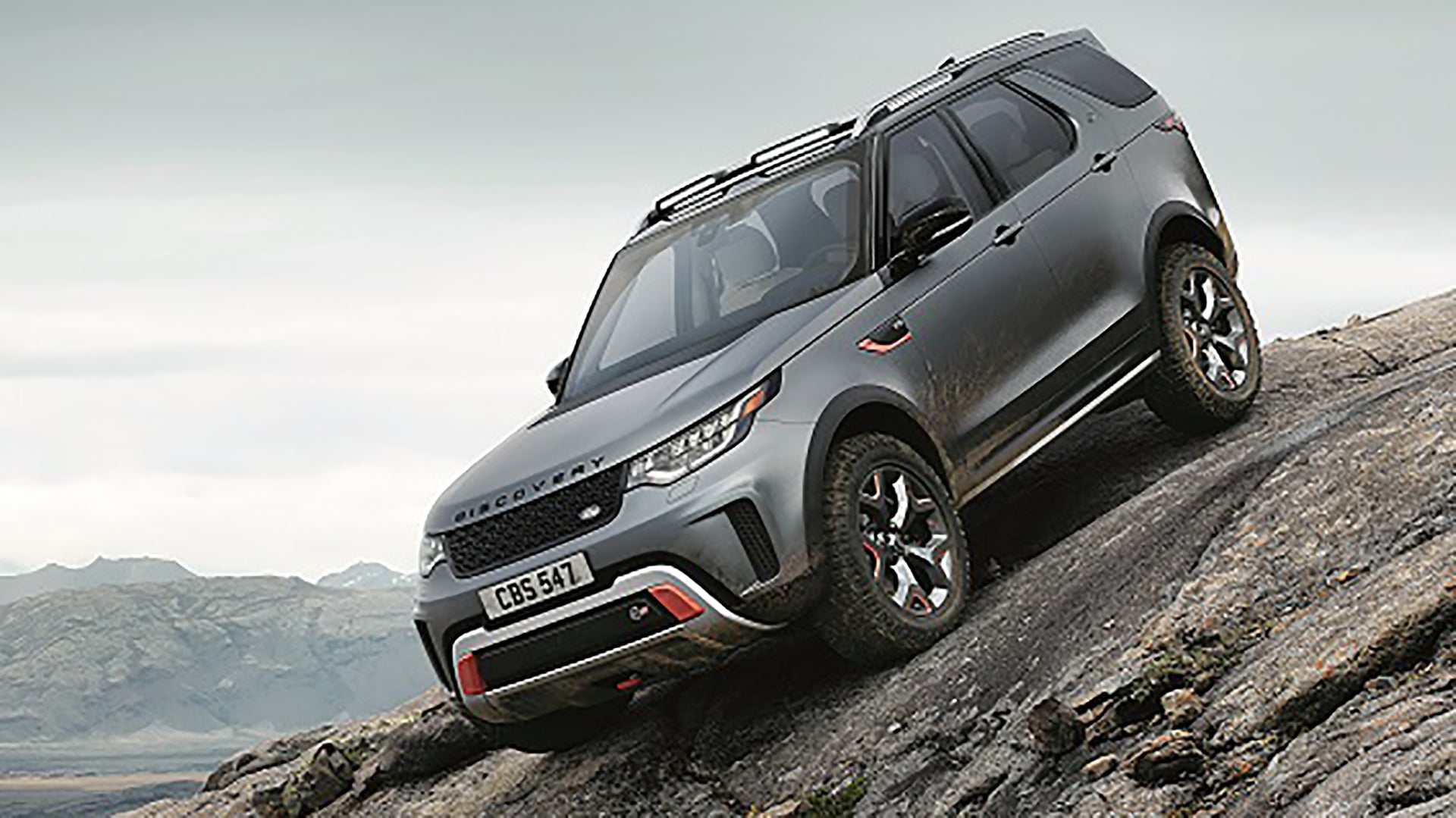 It’s described as the “pinnacle of the Discovery family”, and is basically the most extreme version of a Land Rover we’ve ever seen. With a huge 525hp 5.0-litre supercharged V8 petrol powertrain, gargantuan 815mm all-terrain tyres, and a ground clearance that trumps even the new Land Rover Discovery 2017, this is a force to be reckoned with.

Better still, it was developed by the Special Vehicle Operations team that brought us the 200mph Jaguar F-Type SVR, and the same minds who are developing the electric Jaguar I-Pace eTrophy race car (also announced at IAA 2017).

Anyone swinging by the Porsche stand at this year’s Frankfurt motor show will be able to catch a glimpse of the new 680hp Porsche Panamera Turbo S E-Hybrid Executive, which is seriously long.

US tech giant Qualcomm wooed Frankfurt Motor Show attendees with an impressive presentation on DEVC – that’s dynamic electric vehicle charging, to you and I.

With DEVC, the pads are embedded beneath road surfaces and energised by power stations on the roadside. This means it’s possible to charge an electric car while you drive along the road, without ever having to plug in your car. It could also be a major boon to taxi ranks and bus stops in UK cities.

Sadly, it’s just a concept for now, but a Qualcomm spokesperson told Trusted Reviews that we could see such technology rolled out in as few as 10 to 15 years.

Renault’s big launch at the Frankfurt Motor Show was the new Mégane RS, which is a new version of the standard Mégane, albeit with boosted performance.

This fierce hot hatch rocks four-wheel steering, an all-new 280hp engine with 390Nm of torque, and an 11% efficiency improvement compared to the previous generation.

The real eye-grabber at Renault’s IAA 2017 stand, however, was the Renault Symbioz concept. It’s supposed to showcase Renault’s vision of the car of the future, and looks undeniably space-age.

The car, which is what Renault reckons vehicles might look like in 2030, is fully electric and autonomous, and connected to the environment around it. It won’t carry drivers, of course, but “travellers” who will “enjoy a cabin that feels like home”.

The Brazilian racer is a world champion of electric car race series Formula E, thanks to a first-place finish in the third (and most recent) season of the series. He’s also spent a year advising Roborace, so he’s not entirely new to the company.

In a statement, di Grassi said: “We want to take Roborace where motorsport cannot go, focusing the platform on road-relevant autonomous technology. The future of mobility is autonomous, that’s an industry consensus now.”

He continued: “In the same way, I believe that motorsport is about the driver, who is the best human being behind the wheel. I want to develop the Roborace series to be complimentary to traditional motorsport, and not to replace it.”

The design has been refined a little since Shanghai, but it’s still similarly space-age – especially on the inside.

IAA 2017 Dates: When is the Frankfurt Motor Show?

The IAA 2017 is officially held between September 14 and September 24 this year, but most of the announcements will had already happened by the time the show began proper.

That’s because the press days take place before the show actually opens, with major press conferences falling on September 12 and 13.

Here are the key press conferences from this year’s Frankfurt Motor Show: