Huawei’s next smartwatch now has a name. Read on for all the latest news, leaks and rumours about the Huawei Watch Fit.

We’ve learnt quite a bit about the Huawei Watch Fit – codenamed Stia – over the past few weeks. Details include its presumed name, release date and the smartwatch display and band designs.

We’re major fans of the Huawei Watch GT 2e, a more sports-suited version of the 2019 Watch GT 2 contender to the Apple Watch. While it’s yet to be confirmed whether the Watch Fit will be an everyday smartwatch or an exercise-oriented fitness tracker, the ‘Fit’ name certainly indicates the watch will have some health tracking capabilities.

We’ve collated all of the latest information, leaks and rumours so you can stay up to date regarding the Huawei Watch Fit. We’ll be updating this guide regularly so make sure to bookmark this page if you don’t want to miss a thing.

When will the Huawei Watch Fit be released?

Huawei has yet to reveal when the Watch Fit will hit stores. According to a report from GSMArena, the smartwatch is due to launch in September, so we could hear more about the Watch Fit at IFA 2020 as Huawei will be in attendance.

How much will the Huawei Watch Fit cost?

The GT 2e launched for £159.99 earlier in 2020, which potentially gives the Watch Fit room to undercut both the 2e and the Fitbit Charge 4.

What features will the Huawei Watch Fit have?

According to Twitter tipster Sudhanshu (via Huawei Central), Huawei appears to be moving away from the circular displays on its other watches and toward a rectangular screen akin to a Fitbit or the square Apple Watch. Images of the Watch Fit can be seen in the supposed press renders below: 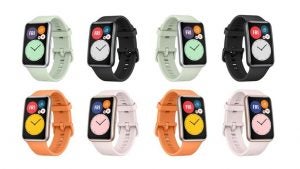 Sudhanshu also revealed the watch will have a 1.64-inch AMOLED display, with a resolution of 456 x 280 plus 5ATM water resistance. The watch will also feature a number of sensors including a heart rate sensor, accelerometer, ambient light, GPS and a barometer.

According to the Huawei Central report, the watch has a battery life of up to 10 days and will come packed with a charging station and cable in the box. The watch is also rumoured to be powered by a new Kirin A1 chipset and will be capable of detecting different activities and exercises.