The Huawei P30 Pro may just be around the corner with its innovative quad-camera setup, but a patent uncovered by LetsGoDigital suggests that the Chinese company may be saving something even more dramatic for a future handset.

The patent, which was filed with the European Union Intellectual Property Office last November but published at the end of February, shows a device with two screens. Not two screens in the Samsung Galaxy Fold sense, but a large display on the front and a smaller half screen on the back just below the triple-camera array.

While this design isn’t entirely novel – we’ve seem front and back screens before with the Vivo NEX Dual Display – this would be a curious implementation of the feature. For one thing, the second screen only takes up half the back, which would be handy for avoiding accidental presses, but would make it pretty much only useful for selfies. 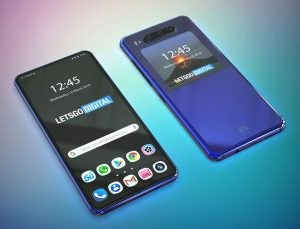 But more strangely, while Vivo’s dual screen plan was to save on the need for a front-facing camera, the Huawei phone still includes a cut-out notch on the front. This may just be for face unlocking, but even if that’s the case it does make the expensive inclusion of a whole second screen a harder sell.

Of course, rear cameras tend to offer far better results that front-facing cameras, so that doesn’t mean the feature is completely without merit. Aside from anything else, the square lens on one of the cameras suggests a periscope-style zoom – the kind we’re expecting to see on the Huawei P30 Pro at the end of the month.

Whether this patent excites you or not, it’s worth including the usual health warning: patents don’t necessarily suggest a product that will ever actually be made. Many companies patent ideas and then sit on them, but it does at least offer insights into the kind of problems they’re mulling over. And in Huawei’s case, that’s clearly how to make selfies better.

Would you buy a phone with a second screen for selfies? Let us know what you think on Twitter: @TrustedReviews.