Huawei has unveiled its 2015 flagship  P9 and  P9+, claiming they have the most “advanced cameras” ever seen on a smartphone.

The  P9 is Huawei’s hero device for the year and targets the top end premium market, putting it in competition with the Samsung Galaxy S7 and LG G5. This gives it some pretty big boots to fill.

The Samsung Galaxy S7 is one of a select few handsets to achieve Trusted’s hallowed 10/10 review score, and is the best Android handset currently available.

We haven’t finished our final review of the G5 yet, but from what we’ve seen one of the most interesting phones to date. It comes loaded with a nifty modular system that lets you add new functions to the phone using special peripherals LG calls “Friends”. 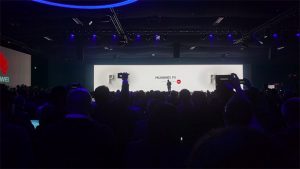 Huawei’s taken a more basic approach with the  P9 and P+ and is betting on Leica camera tech to entice buyers. Both phones feature 12-megapixel rear cameras with colour and monochrome Leica lenses.

The two camera sensors can be used in isolation or simultaneously. Huawei claims using the two sensors concurrently will radically improve the P9 and P9+’s low light performance. Huawei didn’t offer any technical reason why this is the case though.

Yu also claims the dual sensor means the P9 and P9+ are the first phones in the world that will be able to capture a “professional Bokeh effect”. That’s the funky looking aesthetic that a camera creates from out-of-focus points of light.

Huawei consumer business group  CEO Richard Yu claim the camera is the most advanced ever featured on a smartphone.

“, we’re reinventing smartphone photography. ” he said during a launch event attended by TrustedReviews.

Huawei also made a big deal about the phone’s “invisible edge”. Which basically means the metal phone has an outright miniscule bezel around its screen.

Outside of their cameras the phones’ hardware is pretty much par for the course for a 2016 flagship smartphone, The  P9 comes loaded with a 5.2-inch full HD screen and runs using Huawei’s Kirin 955 chipset alongside 3GB of RAM. The use of the Kirin chip is no bad thing.

Past Kirin Huawei handsets, like the Mate 8, have absolutely blitzed our performance benchmarks, and outside of a few software bugs, are wonderfully fast.

Backing this up the P9 will have  a sizable 3,000mAh battery and 32GB of internal storage – though you can upgrade its space using the phone’s microSD slot.

The P9+ has a larger 5.5-inch full HD screen, 4GB of RAM, 3,400mAh battery and more robust 64GB of internal storage, but is otherwise pretty much identical to its smaller sibling.

The only potential issue with the phones is their use of Huawei’s Emotion UI. Emotion UI is a custom skin that sits above the phones’ main Android Marshmallow operating system. In past reviews it’s been a serious drain on Huawei phones’ overall appeal, thanks to its insistence on adding bloatware most westerners don’t need and bizarre UI changes, like the removal of the Android app tray.

Interested in the P9 or P9+, or think Huawei’s swung a miss? Let us know in the comments section below.