The emerging generation of autonomous vehicles are packed with high-end machine-learning computers, a range of cameras, and motion sensors – a bit like today’s best smartphones.

Huawei, for instance, reckons its existing Mate Pro 10 can do a pretty good job. The firm is touting the Huawei Mate 10 Pro as the first AI enabled phone to drive a car so obviously we had to see it for ourselves at MWC 2018.

Its RoadReader project put the firm’s object recognition software and learning capabilities to the test in order to avoid running over a dog.

It believes the P10-powered Porsche Panamera beats current autonomous vehicles because it can tell a dog from a cat, for instance.

The firm says: “Unlike other driverless cars, which simply detect obstacles, Huawei has used the embedded artificial intelligence on its Mate 10 Pro smartphone to transform a Porsche Panamera into a driverless vehicle that doesn’t just see, but crucially, understands its surroundings.

“This means that it can recognise different types of obstacles and respond with various manoeuvres accordingly.”

You can see the demonstration below. We’re struggling to believe it really sat a super cute Labrador in the middle of the road and trusted the vehicle to swerve out of the way, but we’ll leave that up to you.

Huawei says it developed the system from scratch in just five weeks. It converted the car to be robotically controlled and then built a communication system between the phone and the car.

“Our smartphone is already outstanding at object recognition. We wanted to see if in a short space of time we could teach it to not only drive a car, but to use its AI capabilities to see certain objects, and be taught to avoid them” said Andrew Garrihy, Chief Marketing Officer, Huawei Western Europe.

“If our technology is intelligent enough to achieve this in just 5 weeks – what else can it make possible?”

The company brought the car to Barcelona for MWC 2018 and we went along for the ride, which you can check out below along with our video report.

Shot on a GoPro Fusion mounted with a suction cup mount

When I first heard about Huawei’s AI exploits, I must admit to being intrigued. The reality is, it’s probably not quite as exciting as it sounds on paper. But that’s not really the point, and Huawei was quick to point this out. This isn’t the company’s foray into autonomous vehicles, it’s merely a proof of concept to show what the AI capabilities of its Kirin 970 chip can do.

It’s set up to get designers and programmers onboard to really show off what an embedded NPU (neural processing unit) is capable of in the right hands. After all, this whole project came together in just five weeks in the run up to MWC.

But really, the whole event was just a way to showcase the Kirin 970’s object recognition, with Huawei’s programmers able to teach it to recognise certain objects and then give the relevant instruction to the retrofitted Porsche Panamera used for the demonstration.

A special camera was mounted in a roofbox on the car, which was wired over to a Huawei Mate 10 Pro inside, relaying what the camera could see (from a decent distance, I might add). Object recognition in this manner isn’t exactly anything new, many of Sony’s Xperia phones from last year have something similar when using the camera app by being able to recognise food as a subject and tweaking the settings accordingly, which is also one of the main uses for AI in the Mate 10 Pro at present. 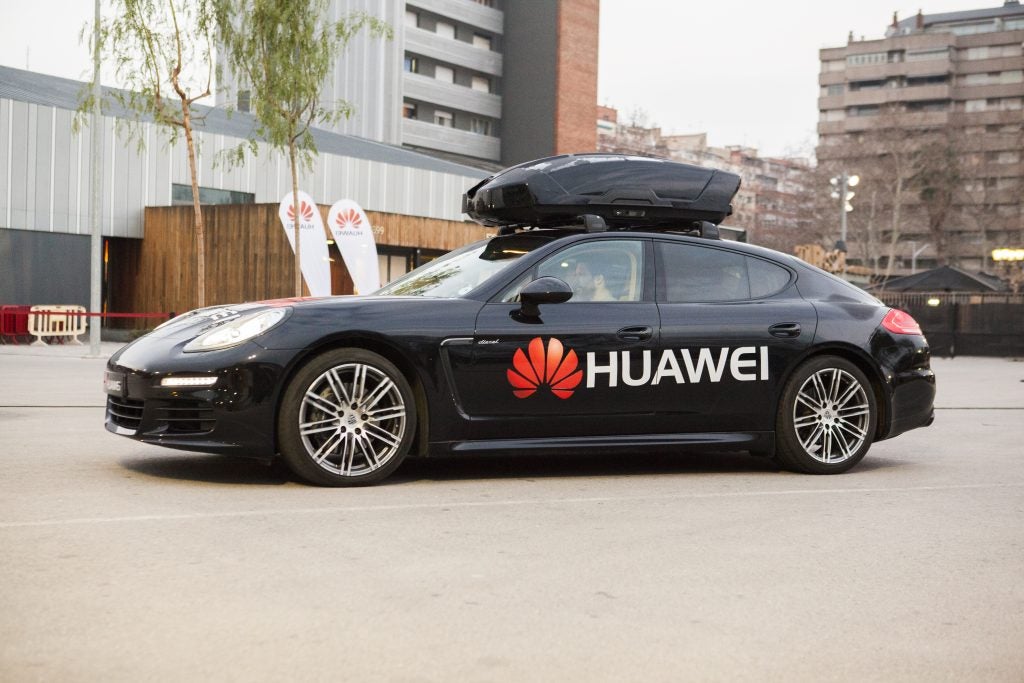 The demonstration itself consisted of the Mate 10 Pro ‘learning’ the route and objects on an initial slow speed run, followed by a second 30MPH run wherein I could choose what action to take when it recognised one of the objects.

It all worked as planned, but then the objects themselves were also gigantic cardboard cutouts, rather than life size 3D versions that could have been more difficult to interpret. The Kirin 970 can at least recognise up to 1000 objects after being fed a million different images.

But even then, you have to be careful as to what gets fed into its library. For example, if it’s taught to recognise a ‘bicycle’ with photos of a bicycle with a human, that’s what it’s going to be looking for when using its object recognition. The Mate 10 Pro at least had no issues with the out of the ordinary Barcelona snow.

In the end, it was a novel demo, but not one that really left me any the wiser for what greater potential there is for onboard AI on a smartphone chip. Hopefully it does at least inspire developers to tap into the potential of the Kirin 970 for something more ambitious down the line.

Would you trust your phone to drive your car? Drop us a line @TrustedReviews on Twitter.