Opinion: Sean Keach thinks zombies are great, but VR could be even better. If you plan on attending Virtually Dead, DON’T READ THIS, major spoilers below

In a matter of days, Arizona’s population has been reduced by millions.

An infection is spreading, and I’m on Britain’s frontline – a dilapidated warehouse in Hackney – looking to put the hurt to any zombies that think crossing the Atlantic is a good idea.

That’s what I was told last night at Virtually Dead, an event run in partnership with HTC to show off how the Vive virtual reality headset can be successfully married with exhilarating real-life experiences. Virtual reality, HTC tells us, can be social too.

But after zombie-shuffling away from HTC’s half-real, half-virtual frightfest, I’m left with a terrifying feeling that virtual reality might just be too good. In a world occupied by the living dead, the lucidity of VR was by far the scariest thing. 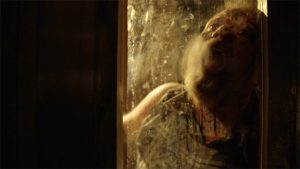 It began with twenty of us – journalists, film directors, and my headband-wearing editor – lining up under a bridge in East London. A faux-military van marked ‘UN’ pulls up and soldiers cart us off to a ‘training camp’ filled with angry soldiers. The dead have risen, so I can forgive their army angst.

Then we’re suited up in camo gear and drawn through a labyrinth of cargo containers, scaffolding, and blood-spattered actors, all in an effort to convince us that death is both imminent and unavoidable. The crescendo of horror came early on when we found ourselves locked in a pitch-black room, courtesy of a mad scientist. A flashlight reveals a zombie chained to the wall. The torch flickers, and the zombie isn’t chained to the wall anymore. The light goes out. Oh shit.

Fortunately, we’re quickly shuffled back out of the room, and we realise that we’re probably not going to have our brains eaten today. Great news for humanity and, of course, for TrustedReviews.

The next stage of the experience is a VR training session, to better prepare us for our impending doom. We’re individually grabbed by scientists, pulled into side-rooms, and kitted out with the HTC Vive headset, plus two controllers. 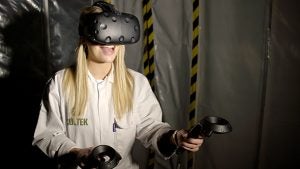 This is where the real fun begins. We were given a welcome chance to play the yet-to-be-released Arizona Sunshine, a VR zombie shooter developed by Vertigo Games. This thing is seriously awesome. It’s simple in design: a wave-based shoot ‘em up that sees you blasting through hordes of zombies with progressively deadlier weapons. Five minutes in and I’m on a bridge, dual-wielding Uzis, laying waste to anything that moves. It’s Arizona, so I probably killed a couple of cacti too.

Halfway through, I’m told that it’s time to go into the dark zone, which turned out to be a mine. There was no light, so I had to swap out one of my submachine guns for a torch. This seriously ramped up the scare factor, because not only was I one weapon down, but I could only see where my torch was shining. And when you’re in a dark space filled with fast-moving zombies that can approach from many angles, it’s spare-underwear terrifying.

But after a paltry ten minutes of gameplay, I was yanked back out of virtual reality and back into the real-life experience. I spent some time in a freezer filled with hanging corpses. I watched an infected soldier have his leg sawed off, spraying us all with blood. I barricaded a door with my body, which was the only way to protect us from the chomping throng outside. Sounds exciting, right? I wasn’t so thrilled. 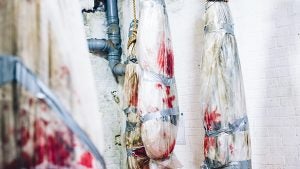 For the remainder of the experience, all I wanted to do was play with the HTC Vive some more. Sure, real-life zombies are great, and the experience was superbly curated. But the HTC Vive is inimitably immersive, so much so that it’s hard to describe unless you’ve tried it. I’ve used the headset several times before, and I’ve yet to lose the sense of awe that the Vive serves up in heaps.

I’m not sure how I should feel about preferring the virtual reality portion of Virtually Dead to the real-life bits. I’ve always said that VR will put a damper on traditional forms of entertainment, and this seems to have further consolidated that belief. What’s more arresting is the fact that we’re only very much on the cusp of what’s possible with VR. By all measures, Arizona Sunshine is a basic game that could’ve been built ten years ago. But its worth increases exponentially when standing on the shoulders of virtual reality.

What will be possible in five years, ten years, and beyond, I can only imagine. But based on what I’ve seen so far, I can’t wait.

Tell us your thoughts on virtual reality in the comments below.