The all new HTC One M8 release date is just a few weeks away. The phone will be announced on 25 March, at a huge event held in London and New York.

Almost everything about the new HTC One has already been leaked. So if you’re keen to know about one of the top Samsung Galaxy S5 rivals, read on.

All New HTC One – Release date and launch

The funny little teaser below has
already told us a bunch of features Samsung and Apple would never have
deliberately let slip pre-release.Watch it below.

The
HTC One is going to retain the name of its predecessor. HTC has taken
to calling the phone the ‘all new’ HTC One in its launch teasers.

Much like the Nexus 7 or iPad mini,
the name remains largely the same in this second generation. For
clarity’s sake, we’ll call it the HTC One 2 for the time being. Our
advice – if you’re planning on buying one on the high street, make
double sure you end up with the second HTC One, not the first. 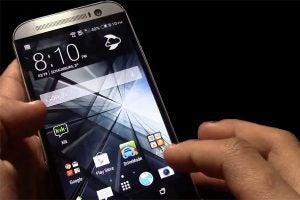 The HTC One 2 is a top-end phone. That means it won’t come cheap.

However,
prices are some of the lesser-leaked details of phones. This is in-part
because the prices vary significantly between countries and exactly how
the phone is bought – on contract, SIM-free or on pre-pay locked to a
network.

It’s not hard to make an educated guess about the
SIM-free price of the HTC One 2, though. Almost all mainstream top-tier
phones start their shelf lives at between £500 and £600 these days.

The
HTC One 2 will have a design similar to that of the first HTC One. That
means an aluminium body with some small plastic inlays.

A 12-minute video of the phone has been leaked, telling us exactly what it looks like. Have a watch:

Notice
the use of dual camera-style cut-outs on the phone’s rear. One is
clearly the main camera sensor, sitting exactly in the same position as
the HTC One’s camera.

The other one, on the top of the HTC One
2’s rear, is a bit more of a mystery. We believe it to be a camera
sensor rather than anything else, but there are a few different kinds of
dual-sensor camera setups doing the rounds at present.

There
are two main kinds that have taken our notice. One uses a second sensor
to gather depth data, the other uses a second lens with a different
focal length in order to offer ‘optical-style’ zoom that’s far more
effective than digital zoom. Sources suggest the former ‘depth’ camera
is more likely, and it’ll be used to create shallow depth of field
effects in your photos.

Read more about the HTC One 2 camera 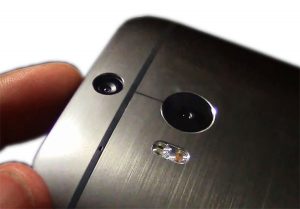 Also
notice the use of a dual-LED flash rather than a single-LED one. Like the iPhone 5S’s flash, it appears to use two different shades of LED to let the phone alter the tone of the flash to suit the situation in hand.

The other big design change is only visible from
the front. The HTC One 2 is expected to ditch touch sensitive soft keys
in favour of software buttons.

An HTC Sense interface screenshot
leak by @evleaks on Twitter suggests this is the case too. Such a move
will help the phone lose some of the length of the HTC One. The HTC One
is a particularly tall phone – given its screen size – because of its
use of front-loaded stereo speakers. It is 137mm long, a millimetre
taller than the Galaxy S4 even though that phone has a significantly
larger screen. 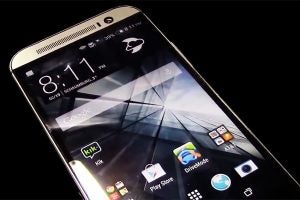 In
the HTC One, a slightly smaller screen than rivals like the Samsung
Galaxy S4 let the phone stay roughly the same size as the competition
while using space-hogging BoomSound stereo speakers.

The same
sort of design approach is likely to be used in the HTC One 2. Once
again, the leak comes from @evleaks on Twitter, who suggests the phone
will have a 5-inch display. That’s ever-so-slightly smaller than the
Samsung Galaxy S5’s 5.1-inch screen.

Resolution will likely stay
the same as last year’s model at 1080p. Although there have been plenty
of rumours suggesting 2K-resolution phones will arrive this year, we
won’t see them in Q1 by the sounds of it. With the Samsung Galaxy S5
using a 1080p screen, a 2k HTC One 2 seems incredibly unlikely. 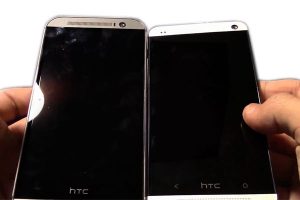 One
of the most talked-about features of the HTC One was its camera. It
introduced the UltraPixel camera, which reduced the megapixel count in
favour of having larger sensor pixels.

The HTC One 2 uses two
separate camera sensors and lenses. The most credible leak on the matter
suggests that one of the sensors will be of 4-megapixel UltraPixel
resolution, the other a 2-megapixel sensor. That the second one is so
low-res shouldn’t matter greatly as it is there to gather depth data,
not traditional image data.

Once the HTC One 2 knows how far
away objects are, it can selectively blur out background elements to
give photos that have the sort of shallow depth of field effects you
simply can’t create convincingly with a mobile phone.

We’ll be back with more information on the second HTC One 2 as it surfaces.

Next, read all about the Samsung Galaxy S5