The HTC One M8 camera features have been detailed in a leaked ad ahead of the official launch.

A leaked photograph of an advertisement from Tesla, a major Australian carrier, has given us some of the reasons why HTC has chosen to introduce a dual rear camera sensor.

According to the ad, the HTC One 2’s so-called HTC Duo Camera will allow you to choose focus points, create Bokeh effects and 3D “effects.”

The Nokia Lumia 1020 and its Refocus app caused the refocusing ability to become very popular, and it is something that has since been introduced with other flagships like the Samsung Galaxy S5, Sony Xperia Z2 and LG G Pro 2.

However, hopefully thanks to the dual cameras, the HTC One 2 won’t need to take multiple shots in order to use the effect and could offer better results than other smartphones with the feature.

The HTC M8 will also feature a dual-LED flash, which has one white and one amber LED to make your images look more natural.

The ad also gave us some details on the upcoming HTC Sense 6.0 UI that will ship with the HTC One 2 and the features that it will offer.

“HTC Sense 6.0 simplifies your smartphone experience. Double tap the screen to turn on your phone, swipe to access your favourite apps, news and social media feeds.”

Read more: HTC One 2 M8 camera explained – Is it just a gimmick? 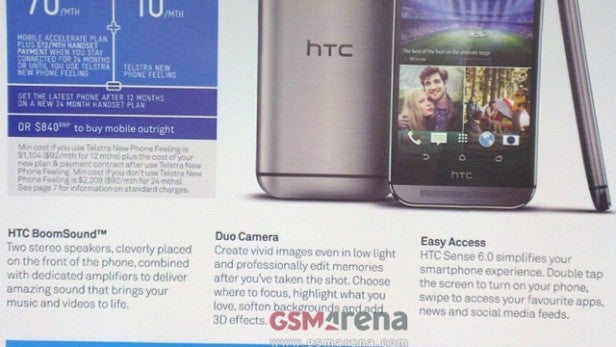