As the gaming PC boom continues, HP hopes to capitalise on the popularity of trendy powerhouse rigs with its refreshed Omen lineup.

In an announcement today, HP revealed a “re-designed and re-engineered” gaming machine portfolio that features both desktops and laptops. What’s more, HP announced that the Omen by HP range was the official partner for the Overwatch World Cup, which gaming studio Blizzard will be running this summer.

“Omen by HP is one of the fastest growing major PC gaming brands today,” said Anne-Sophie Hadberg, Head of Consumer Systems for HP in Europe.

She continued: “Gamers and eSports athletes want the coolest, most innovative and powerful products on the market with the designs they crave. With our reinvention of the entire OMEN portfolio – from design, form-factor, engineering and performance – we helping them compete at the highest level.”

First up is the Omen X Compact Desktop, which is built around the idea of cramming top-end hardware into a small package – a noble cause. Despite the dinky body, the Compact Desktop features Nvidia’s powerful GeForce GTX 1080 graphics card, which supports 4K gaming and is VR ready. You’ll also get a new Intel Core i7 (7th-generation Kaby Lake, of course) processor. 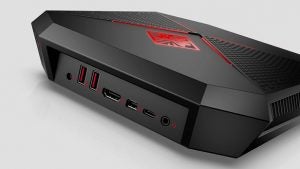 Excitingly, you’ll also get a VR backpack with the Compact Desktop, which lets you carry your PC around on your back. The idea is that you’ll plug your VR headset into your computer, and roam relatively freely, making use a hot-swappable battery system when playing for extended periods of time. You get four batteries, and a charging dock that charges two batteries at the same time.

There’s also the Omen Desktop proper, which is a souped of version of the Compact Desktop, with more enticing specs.

For instance, you get dual Nvidia GeForce GTX 1080 Ti (SLI), or dual AMD Radeon RX 580 (Crossfire), giving you more graphical horsepower than you’ll probably ever need this year. There’s also options for 7th-gen Intel Core i5 or i7 cards, or overclockable AMD CPUs from the new Ryzen series.

The only other major entries are the redesigned Omen HP 15 and Omen HP 17 laptops, which have been revamped for better VR capabilities. 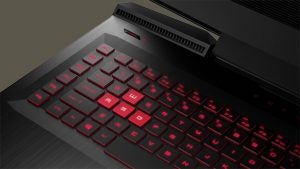 Other perks include an optional 4K display, or a 120Hz 1080p display option for fast refresh rates thanks to Nvidia’s G-Sync technology.

Here are pricing and release details:

What do you think of HP’s refreshed gaming portfolio? Let us know in the comments.