Vodafone has joined EE in offering a proper 5G network in the UK, and we’ve had the chance to try it out with the flagship Samsung Galaxy S10 5G.

EE might have been first at offering 5G in the UK, but Vodafone has now joined the party and the network certainly has a lot going for it. It’s offering a number of unlimited plans (you won’t find this on EE), 5G roaming in holiday destinations such as Spain and Italy, and an improved app for sorting through extra benefits.

While the above are a welcome bonus, what makes a 5G network great – at this early point in its life, anyway – is the speeds. Of course, 5G will eventually offer far more than just faster data, but for now it’s a good place to start.

Armed with a fully charged Galaxy S10 5G and Vodafone 5G data, I headed out into London to see just how fast it performed.

All the below speeds are correct as of Friday 12 July. Note that since Vodafone will be constantly adding to and altering its 5G network, they could change significantly over the coming weeks. They’ll also likely be different at busier times, and when more people start utilising the 5G service. I’ll be updating the results on this page once I’ve tested the service in more areas. 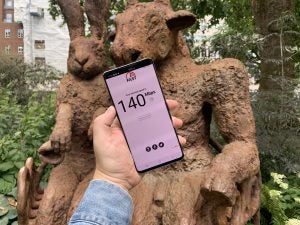 The first thing I noticed about Vodafone’s network was how restricted it felt compared to that of EE. With Vodafone, I only received 5G signal in the exact spots I was suggested to check out. With EE the 5G signal remained even whilst walking between spots.

In St James’ Square, for example, I reached an impressive 140Mbps on the 5G network (roughly four times the speed of 4G in the area), but speeds varied significantly when I moved away from the centre of the square. On the outskirts it was more likely to be 60-80Mbps. 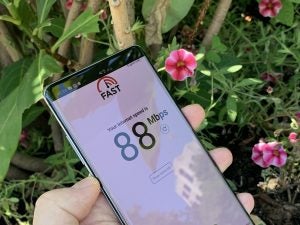 It was a similar story in Victoria Embankment Gardens. Here my speeds topped out between 88Mbps and 99Mbps (double that of 4G), allowing me to download a 50-song Spotify playlist in less than a minute. However, it would often flip between 4G and 5G with no obvious reason. 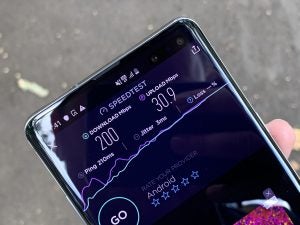 The highest speed I saw on Vodafone 5G was 200Mbps in Soho Square just before the lunchtime rush. Around this area both EE and Vodafone deliver some great speeds, so if you spend a lot of time here then the jump to 5G jump may well  be worth it. 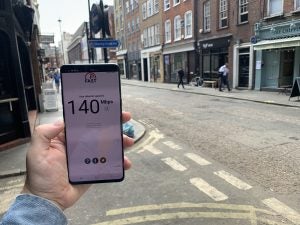 When it came to receiving a consistent 5G connection, the Soho/Westminster area was the place to be. Here I could walk around the streets without the 5G symbol disappearing.

Overall, Vodafone’s 5G is fast, comfortably delivering speeds that are triple what I saw from a 4G SIM. However, it didn’t reach speeds as fast as EE. This is far from a definitive verdict, though; I’ve seen others reach much higher speeds.

What I did find with Vodafone was the area served by 5G didn’t feel a strong as EE, especially around central London. It’s a newer network, though, so this could change.

While 5G versions of devices such as the Oppo Reno 10x Zoom and OnePlus 7 Pro are virtually indistinguishable from their 4G cousins, the S10 5G is a completely new device. This isn’t a rebranded S10, nor is it an S10 Plus; instead, it’s a unique member of the S10 family.

Samsung has clearly had to follow this route because the Galaxy S10 and even S10 Plus are small phones when compared to the OnePlus 7 Pro 5G and Oppo Reno 5G. Where they could just use the space that was already there, Samsung had to create more.

When I first held the S10 5G earlier in the year, it felt far too big. A number of months later, I must have become accustomed to using such gigantic devices (again, the OnePlus 7 Pro stands as an obvious example) as the S10 5G doesn’t feel that big. You’ll likely think differently if you’re coming from an iPhone XS or even a regular S10, though. As a frame of reference, the S10 5G is taller than an iPhone XS Max clad in one of Apple’s leather cases.

What makes the S10 5G bigger is the 6.7-inch Super AMOLED display, which takes up virtually the entire front of the device. Like the other S10 handsets, the 5G has curved edges, an oblong cutout for the two selfie cameras, and a fingerprint built into the display. It’s a predictably excellent display, with punchy colours and support for HDR10+.

Inside the S10 5G version I’ve been using is an Exynos 9820 8nm chipset, 8GB of RAM and 256GB of storage. There’s no SD card expansion here – something that’s rumoured to making its way to the Galaxy Note 10. However, it retains the water-resistant body, wireless charging and headphone jack.

Battery life is still an unknown in 5G phones, and we likely won’t know exactly how good the endurance of such devices until the network is more widespread. Trekking around London and running a speed test every time a 5G logo appears isn’t the best way of conserving power. I managed to drain the hefty 4500mAh in about 7 hours of 5G testing, which included an hour or so tethering. Thankfully, Samsung has finally upped its fast-charge standard here with a new 25w charger, which will take you from 0-100 in roughly 90 minutes.

I like the S10 5G. It’s probably the best all-round 5G phone you can buy right now thanks to the same great cameras as the S10 Plus, alongside extras such as wireless charging, a water-resistance rating and a headphone jack.

It’s seriously pricey, though, and it certainly isn’t worth the money unless you know you’re going to get the most out of 5G now. Vodafone is currently offering the S10 5G for £79 a month (on its Unlimited Max plan) with a £29 up-front payment. You could pay £72 a month for Unlimited Lite, but this caps your speed at 2Mbps, making 5G utterly pointless.

I’d say it’s worth holding off to see what other 5G devices make it to market later in the year. I’d expect the Galaxy Note 10 to possess some sort of 5G support, too. Delaying will also likely mean that when you do take the plunge, the network will have matured a little.