NHSX, the digital innovation arm of the National Health Service, is currently working to develop a contact tracing app, capable of tracking the spread of Covid-19 and informing people if they have been in contact with someone who has the virus. It’s caused a lot of controversy, and here’s what you should know about it.

Health Secretary, Matt Hancock, has announced that the government and NHS strategy going forward will be to “test, track and trace”, which will require a well-oiled combination of test centres and a fully functioning app.

Once people have been tested, the thinking goes, they can set their status on the app as infected or not infected. Then, when (or rather, if) they are out and about, their phone sends out codes via Bluetooth to other nearby phones.

If you come into contact with someone who has the virus, your app can then alert you that that is the case.

The NHS app is currently being trialled on the Isle of Wight, but the fact that the app requires sizeable amounts of data from each user has been a point of criticism from civil rights groups.

Notably, the NHS already rejected help from tech behemoths, Apple and Google, in favour of working on its own app, but so far it has not been well received.

Related: How to stop Google using your location data for its coronavirus tracking reports

However, the mixed reception  for the NHS app was not helped by comments from Matthew Gould, chief executive of NHSX (via The Independent). He said the NHS was not yet sure “exactly how [the app] will work.”

“There will be unintended consequences, there will for sure be some things we have to evolve,” he added. “We need to level with the public on this, that when we launch it, it won’t be perfect and as our understanding of the virus develops, so will the app.” 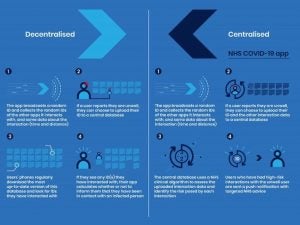 The graphic above, provided by the NHS, explains the difference between the NHSX app and those proposed by Apple and Google.

One of the main factors that differentiates the two is the use of an “NHS clinical algorithm”. The other main differentiating factor seems to be that only those who have had “high-risk interactions” with virus-carriers are informed, where the NHS graphic suggests that Apple and Google’s approaches may tell more people, perhaps unnecessarily.

The graphic seems to imply that that the NHS thinks its “clinical algorithm” based system is more efficient than the proposed alternatives.

We have to remember also, that none of the proposed plans for the app work without a successful, extensive testing programme. The government is attempting to roll this out across the country as we speak, but it’s far from perfect as of yet.

The contact tracing method used by these apps has been effectively used by the NHS for sexually transmitted diseases for some time. Now, experts believe it could be the ideal way to stop the spread of coronavirus.