The Honor View 30 is the next flagship mid-range phone set to be released by Huawei’s sub-brand — here’s all we know about the device so far.

We were very impressed by the Honor View 20, awarding it 4.5 stars out of 5 and describing it as the “antidote” to ever-costlier flagship smartphones thanks to its winning combination of good value and premium specifications. The battery life and fast-charging were particularly remarkable, while the cameras also offered a refined and versatile experience. But that’s not to say it was perfect. We were disappointed by the lack of wireless charging or an official water resistance rating, and frankly the performance could have done with being higher as well.

We’re hoping that the Honor View 30 can be another big success that addresses the few shortcomings of its predecessor. But with the spectre of the Huawei Android ban still looming over the brand, can it still deliver the goods?

The Honor View 30 will be launched on November 26 according to an official post from Honor on Chinese social network site Weibo.

Currently we have no information on when — or even if — the device will land in Europe. As the View 30 will probably not have access to Google Mobile Services (thanks to the Android ban), it may well not be released in the West at all.

The Honor View 20 had an RRP of £499 at the time of release, which was a very good price for the impressive specifications on offer. We expect a similarly competitive price this time around, although the specs bump (detailed below), may push up the costs.

The design of the Honor View 20 was very distinctive, and we were big fans. The rear panel had a shimmering, reflective tone with patterns in the shape of a V, like chevrons, running down the back.

The front had a single selfie camera as a holepunch in the display, a bit like the Samsung Galaxy S10, and it had a fairly chunky chin at the bottom of the screen. The three cameras on the rear were lined up near the top in two separate modules. On a more practical matter, Honor also clung onto the 3.5mm headphone jack which provided audiophiles with an added convenience. 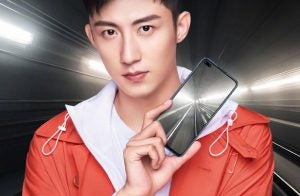 Posted images of the View 30, such as the one above, have shown us exactly what we can expect of the screen design: Slim bezels, and a pill-shaped dual selfie camera similar to that of the Samsung Galaxy S10 Plus. You can get a closer look at the screen from this leaked shot from Slashleaks, which shows the device still in original packaging:

We haven’t yet seen what the rear of the device looks like, so it remains a mystery: contradictory rumours have suggested either a square camera module at the centre (as shown in the tweet below), or a large rectangular module stretching down the side (as briefly seen in the video embedded further down the page.

Similarly, the selfie camera will reportedly be a single-lens affair on the standard model, and then doubled up on the Pro version.

But of course, physical specs alone don’t tell the whole story when it comes to photography, and that’s especially true of Honor phones, which pride themselves on their smart use of Artificial Intelligence to optimise your snaps.

We’ve already got a good idea of what to expect from the Honor View 30 thanks to the intriguing claims in the tweet below (if they are to be believed):

First of all, it’s expected to ship with a Kirin 990 processor, the very same that powers the flagship Huawei Mate 30 Pro. It’s a real powerhouse of a chip that will be a significant (and necessary) update to the View 20, solving one of the few problems we had with the earlier device (which was a little underpowered).

Living up to its predecessor’s fine example, the battery is set to be an impressive 4200mAh capacity, and can reportedly be topped up speedily thanks to its 40W fast-charging capability. However, the screen will remain an LCD affair, rather than the OLED tech preferred by most premium smartphones.

We’re expecting at least one version of the device to have 5G connectivity, bringing the latest mobile data standard to Honor. That’s based on the following leaked video that looks convincingly authentic:

Does the Honor View 30 have Google apps?

The Honor V30 will almost certainly arrive without support for Google Mobile Services. The latest phone from the rand, the Honor 9X, was only released with Google apps because it was certified before the ban came into effect, and it is not likely that the Honor View 30 had the same development schedule. This could of course be a huge stumbling block, meaning that like the Huawei Mate 30, they may not be released in Europe at all.