Apple’s HomePod Mini is finally here, offering a great smart-speaker experience for £/$99. If you’ve recently picked up one of the tiny speakers then here you’ll find seven handy tips to get you started.

1. Tap your phone to transfer music and podcasts

This is perhaps one of the smartest HomePod Mini (and regular HomePod, as it goes) features. If you’ve got something playing on your iPhone, a podcast or playlist for example. just tap your phone towards the top of the HomePod Mini and the audio will transfer over – in most cases, seamlessly. You’ll also get a nice hit of haptic feedback, which will let you know when the transfer is complete.

Want to bring the music back to your phone? Simply hold your unlocked device back near the speaker, wait for the vibrations and it should start playing on the phone again.

We tried this with a number of audio-focussed apps – Apple Music, Spotify, Pocket Casts, Audible etc – and it worked well. However it’s notably quicker in Apple’s own apps, and can be a little unreliable in others. Still, it works.

If you’ve bagged yourself a duo of Minis and aren’t keen on having one in another room, you can always pair the two together to create a neat stereo pair.

Setting this up is fairly straightforward, just make sure the two HomePods are in the same room in the Home app, then tap on one of the HomePods and scroll down until you see ”Create Stereo Pair’. The app will then walk you through the rest of the setup. Note that you’ll get the Stereo Pair option automatically if you add a new HomePod Mini to the same room as an existing one.

Once this is done, your two HomePods will work as one. This won’t work if you’re trying to connect them via AirPlay to your Mac, though. 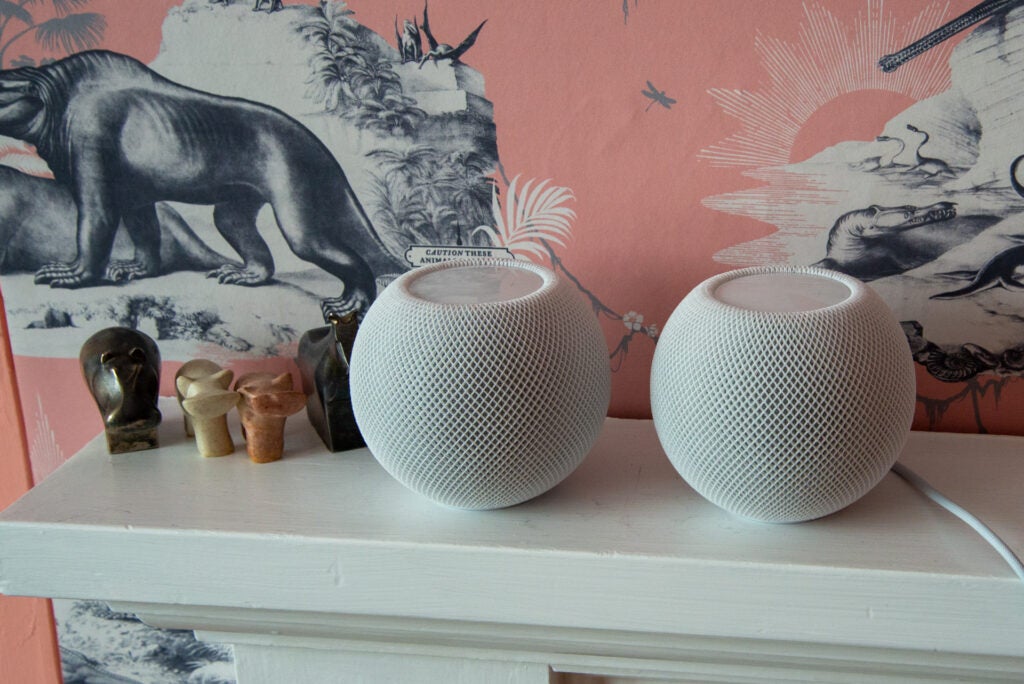 3. Send messages around your house with Intercom

Intercom is a handy feature if you have multiple iOS and HomePod devices scattered around your house and it lets you quickly send messages between them.

To send an Intercom message from your HomePod Mini either tap the top or say “Hey Siri”, followed by “Intercom” and then your message. You can send these from your phone too, just open up the Home app and tap the waveform icon in the top-right corner.

Spotify isn’t natively supported by the HomePod yet, however if you’re not a user of Apple’s own Music app then you can still stream tunes from elsewhere.

The biggest missing feature with using a third-party music app that’s not natively supported is the lack of Siri control, so you won’t be able to say, “Hey Siri, play songs by Dua Lipa”.

Still, you can play music via Spotify by opening up that app, setting something to play and then streaming it to the HomePod via AirPlay. Just swipe down to the Control Center, tap the ‘Now Playing’ tile and then choose your desired HomePod.

5. Wake up Siri without a wake word

You can, of course, enable Siri on the HomePod by saying, “Hey Siri” and then follow it up with your request. But, if you have your HomePod close by, on your desk perhaps, it’s even easier to get to whatever information you want to by just tapping the display on the top and then asking your question.

6. Control the HomePod with a selection of taps

Along with waking up Siri with the above command, you can interact with the HomePod via its display in a number of other ways too. A single tap when music is playing pauses it, while double-tap skips forward and triple-tap takes you back.

7. Use it as a speaker for your Mac

If you’re lacking some decent audio from your Mac – be it a MacBook or iMac – you can easily use AirPlay to beam computer over to your HomePod. Just make sure the HomePod is set up and connected to same network as your Mac and then head into Sound in System Preferences. Here you should be able to select the HomePod as an output device.