Twitter co-founder Jack Dorsey made headlines last week when he donated $1bn to Covid-19 relief efforts. The social media giant isn’t alone though, and we’re examining just how big the efforts of ‘big tech’ have been to fight back against the coronavirus.

Dorsey became the latest in a line of tech billionaires doing their bit to contribute to crisis-relief efforts. The likes of Amazon boss, Jeff Bezos, and Microsoft mogul, Bill Gates, have done their bit too – at least to some extent. Here’s a full round-up of how tech giants have contributed to the fight against the virus.

We already mentioned that Dorsey offered up $1bn – that money is going towards funding research and countering the pandemic, via a relief fund called ‘Start Small LLC’.

That figure already looks massive, but it’s even more amazing when you consider that it’s around a quarter of Dorsey’s wealth. While there have been pretty significant contributions from other big names in tech, none have committed that proportion of their own finances.

Bill Gates, the founder of Microsoft, got involved too, offering up $100m of his estimated $101bn fortune to help fight that pandemic.

However, it’s also true that the Bill and Melinda Gates Foundation said it would contribute $50m towards a fund called the ‘Covid-19 Therapeutics Accelerator’ which is also backed by Mastercard and Wellcome. It’s unclear whether this $50m is incorporated in the $100m promised by Gates, or exists as a separate donation.

He donated $25m to the same Therapeutics Accelerator fund set up by the Bill and Melinda Gates Foundation. However, onlookers on social media have been quick to criticise Zuckerberg for not going further.

Facebook did at least donate a reserve of 720,000 face masks to health workers, which were bought initially due to the fear of wildfires in the California area (via CNBC).

Amazon boss, Bezos, turned his attention to the US food supply, saying: “Even in ordinary times, food insecurity in American households is an important problem, and unfortunately COVID-19 is amplifying that stress significantly.”

As a result, he’s given $100m to Feeding America. The organisation heads up foodbanks across the country.

Now, no one wants to look a gift-horse in the mouth, but it’s worth noting the disparity between Dorsey’s offering and that from Bezos. The latter is worth an estimated $123bn, compared to the $4bn that Dorsey is (or was) worth.

Bezos has also taken fire after inviting the public to donate to ‘The Amazon Relief Fund’, which was set up with $25m of Amazon money and supports the company’s workers during the crisis (via The Independent).

The relatively new Google CEO, Sundar Pichai, matched a $1m donation from his company to help combat the virus near its San Francisco HQ. This follows another $1m donation from the company that focused on the area near its Mountain View, California HQ.

Google hopes to help families in the San Francisco Bay area with direct cash transfers, via charity ‘Give Directly’.

However, the company itself went much farther than these localised donations, promising around $800m in relief in the US.

This donation wasn’t half as good as it sounded though when inspected a little closer. Commentators were concerned to learn that much of the donation came in the form of ad-credits – basically free advertising for non-profit companies. This makes it easy to get information out about the coronavirus, true, but somehow seems less selfless than just laying down the cash (which Google has an awful lot of).

While Google has put down about $200m in cash, the rest of its “$800m” donation is largely in services like ad-credits and ad grants.

Related: How to stop Google using your location data for its Covid-19 behaviour tracking reports 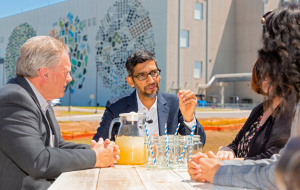 He says that the company is “providing technology like Azure to critical care and first response non-profits to support them in helping those most in need.” The company has also made a $20m grant to fund AI research that could help defeat Covid-19.

The Apple execs have had plenty on their minds, with the launch of the new iPhone SE coming slap-bang in the middle of the coronavirus crisis. That hasn’t stopped them from contributing though, Tim Cook promised that the company would donate “millions of masks” for healthcare workers in the US and Europe.

Meanwhile, sticking to the Tesla tradition of doing things a little differently, Elon Musk promised that his company would provide 1200 ventilators, with more to come later.

Musk and his company hope that the ventilators will provide relief in a critical area for healthcare services in the US.