It’s that time of year again; Hearthstone’s card pool is expanding. Like any expansion, every avid collector will be eyeing up what cards they want to add to their collection and thinking about all the deck recipes that have taken to the ladder in Blizzard’s digital card game.

The release of the Boomsday Project is a perfect time to experiment as Blizzard has been in the lab, just like you. In the coming weeks we will see what Magnetic cards will stick around and whether or not some of these new Mechs are destined for the scrap heap. So, what cards should keep an eye out for? Well, here’s a quick rundown of our favourite cards and why! (Please note that this list is not in a numbered order). 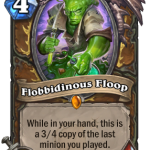 There was a point in time where Druid reigned supreme, but some much needed nerfs ensured that it wasn’t king for long. Floop seeks to reclaim those glory days by way of flexibility.Decks like Malygos Druid and Taunt Druid will benefit massively from his inclusion as while some tempo-based decks could take advantage of his value – ensuring that Floop will be around for the foreseeable future. 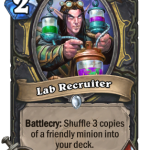 The Lab Recruiter might seem innocuous at first, but the value it offers to all of Rogue’s decks is unfounded. With an effect that you’d expect to see as a combo, Lab Recruiter could allow Miracle Rogue players more wiggle room to use their Leeroys and Vilespine Slayers. Then you have the synergy with Pogo-Hoppers and their ever-growing values, creating room for a new archetype for Rogues. 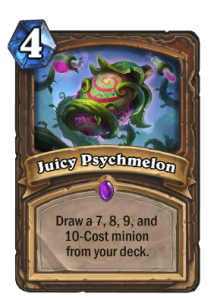 Juicy Psychmelon is every Ramp Druid’s dream and a combo deck enabler. In a hand with both Mana Growth and Nourish, you better believe a Ramp Druid will mulligan hard to hit the Juicy Psychmelon and close out the match in the following turns. It adds a level of consistency to a deck that could occasionally live and die by its draw.

On top of that, there’s a lot of untapped potential in using Juicy Psychmelon to consistently draw your Malygos and Dreampetal Florist in what could be a new OTK (one turn kill) variant for Druid. It’s safe to say that Dreampetal won’t just see play, it will be a deck defining card right next to Flobbidinous Floop. 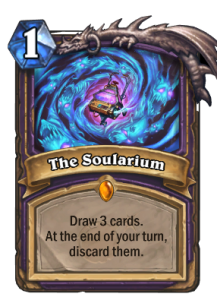 The Soularium is the perfect Warlock card. It’s quick, it discards, and it’s going to be incredibly strong in Zoo. Thanks to Zoo’s fast gameplan it’s rare for you to see the full deck, meaning that Warlock doesn’t care too much about drawing closer to fatigue and the decks low-cost minions can easily be played in conjunction with The Soularium. 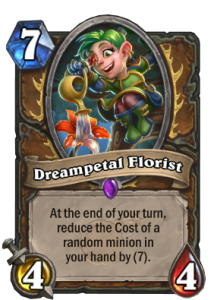 Druid got a good set of cards in The Boomsday Project, while Dreampetal Florist isn’t quite as malleable as Floop, it is imperative in reducing the cost of Malygos and creating more room for big damage turns in Malygos Druid. Plus it can be drawn in conjunction with Malygos through Juicy Psychmelon, guaranteeing that you hold the combo in hand. 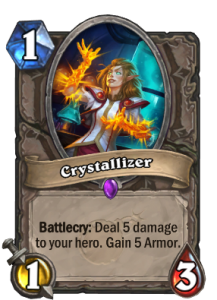 Although it’s far from the flashiest card on the list, Crystalizer is a fantastic 1 mana minion. In terms of stats, it matches that of Dire Mole but acts as an activator for numerous Warlock and Warrior cards while offering the armour, which is typically more valuable than health. Unless your class is reliant on Beast synergy, Crystalizer is your new go-to neutral minion. 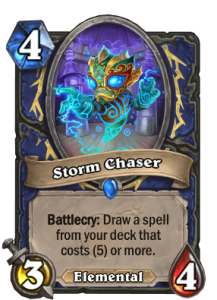 Shaman has received a lot of support for elementals and The Boomsday Project is no different. Storm Chaser is an interesting addition that effectively tutors Bloodlust, threatening massive damage with fairly meek boards – especially when combined with Electra Stormsurge. The only thing holding it back is the rather timid stats, but it’s still one to watch. 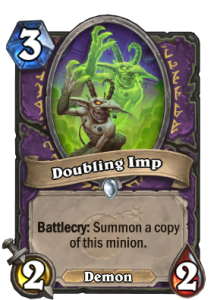 It’s not like the Zoo needed any more cards after The Solarium, but here’s Doubling Imp. Doubling Imp is the pinnacle of value in Warlock, offering a massive bundle of stats for a reasonable price coupled with the Demon tag. When played in conjunction with Prince Keleseth and Soul Infusion (Warlock’s new buff card), it more than earns its place in the Zoo archetype. 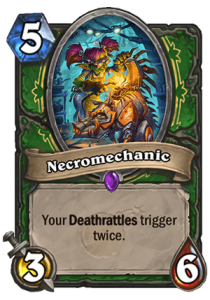 While Egg Hunter doesn’t exactly lack a litany of activators, nothing says value more than getting all those sweet sweet deathrattles a second time. It’s plain and simple, more minions mean more to deal with and at 6 health Necromechanic has a good chance of sticking around to get added value. 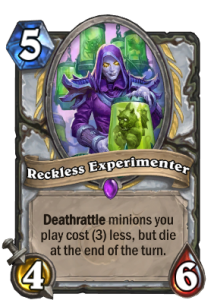 While there have been a few oddball Quest Priests in the meta, very few have stuck around. Reckless inventor could change that with its ability to completely swarm the board with eggs on the turn its played with no need to use clunky activators, also running extremely well with Voodoo Doll.

Even when played on curve, Reckless Inventor will prove to be a difficult card to remove and needs to be addressed before its value starts to really gain momentum. 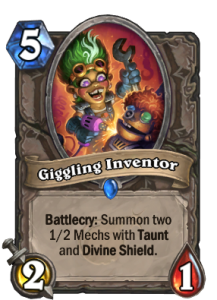 I think it’s fair to say that we’ve all encountered more than our fair share of aggressive decks in the past few months and anything that seeks to stand in the way of them instantly earns a spot on the list. While the tokens of Giggling Inventor are small in stature they are incredibly frustrating to deal with, earning their namesake and then some. 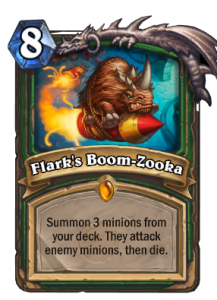 While Flark’s doesn’t fit perfectly into the current build of Egg Hunter, a few tweaks will ensure that the deck has an extra punch at the top of its curve. It might not be able to go face, it will most assuredly aid in clearing some tricky boards and hopefully pull a few deathrattles in the process. It might even provide a much needed comeback factor to a deck that’s heavily reliant on pressure and playing on curve. 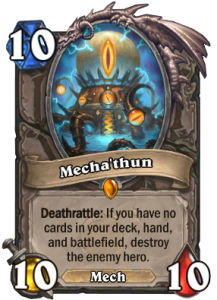 Mecha’thun perfectly walks the line between awful and absurd. The divisive nature of its deathrattle means that it is near impossible to pull off, but absolutely devastating when it works. Eagle-eyed players have already started to try and work it into Even Warlock alongside Galvaniser, Bloodbloom, and Cataclysm to ensure they win the control match. It’s a scary prospect, one that I am more than ready to embrace with open arms. 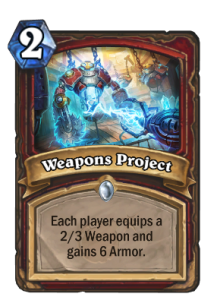 Control Warrior has been on the cusp of greatness for the past few expansions, but it always lacked one or two key tools. Hopefully, Weapons Project can cover some of the utility those decks sorely lacked as a slightly cheaper shield slam activator, avant-garde weapon removal, and vital instrument in fighting an onslaught of early game minions. Even with its obvious downsides of the opposing player gaining armour and a weapon, Weapons Project still favours the Warrior. 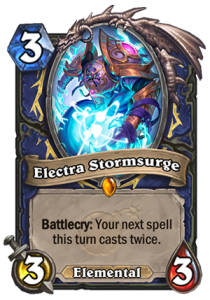 Electra Stormsurge is a quick and dirty punch that doesn’t rely on RNG as much as Malygos Druid did back in the day. For 10 mana and a collection of fairly common cards, Electra Stormsurge could melt an opponent with 18 damage in one turn and that’s before you consider its synergy with Bloodlust. As an elemental, it will easily find its way into a great deal of Elemental and Tempo Shaman decks without much hesitation.

It’s nearly impossible to predict a meta before launch, and at this early stage after launch it’s hard to predict what will land, but these are definitely a few cards to keep your eye out for on launch day. If you’re a little hesitant, don’t be scared to hold on to your dust stockpile for that bit longer. If there’s one thing that’s clear, it’s that The Boomsday Project is all about being a mad genius and following your own instincts, so no matter what you get be sure to take it for a spin before you evaporate it!

Do any of these Hearthstone: Boomsday Project Card tickle your fancy? Let us know on Facebook and Twitter @trustedreviews.