The dust has settled after Blizzcon 2016, and Hearthstone fans everywhere are looking forward to a new expansion: Mean Streets of Gadgetzan.

The new Hearthstone expansion, which is set in Warcraft’s goblin port city of Gadgetzan, is set to land in early December on all platforms.

We spoke to Jason Chayes, Production Director at Blizzard, who leads the development on the game, and who helped create the new expansion, about all things Hearthstone – including what to expect from Mean Streets of Gadgetzan and beyond.

What made you choose Gadgetzan, a pretty innocuous town in World of Warcraft, as the setting for the next Hearthstone expansion?

It actually came later on in one of our design brainstorming conversations about what was the best place to set this, and we were thinking about all the kind of locations in Azeroth, and I think it might have been Chris Metzen who threw it out. He said ‘well, what about Gadgetzan?’, and it just felt like a perfect fit.

Here’s a place where it’s already away from the Horde and Alliance, we already have this neutral auction house that’s sort of this no man’s land; it has this kind of evolution that’s happened since the Cataclysm, since Deathwing came up and basically destroyed Azeroth and turned it into a port city.

And so what happens when you have this place where it’s operating above the law and there’s not really any rules there, and now it’s a port city and starts attracting commerce; well? Well, what we think would happen is the city would grow because guess what? This is a place where you can make a buck without having to make taxes to the Alliance.

It just felt like Gadgetzan really lent itself towards this theme that we were going for, with these crime families…

Does the theme always come first, and then you match it to the lore?

It varies. I mean we knew we really wanted to do something in Naxxramas when we did the first expansion. That was just a location that we thought was really cool.

In the case of Karazhan, the most recent thing we did before this, we really liked the location inside the Warcraft universe, but obviously we took a very novel take on it. Like what if this is happening before the Karazhan you know, and the reason why Karazhan got all messed up in World of Warcraft was because of this most epic party of all time that just trashed the place? 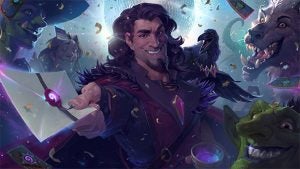 Generally, we try to find these kind of landmarks or keystone moments that we have a lot of nostalgia for and passion for in the Warcraft universe, and we build that into a theme for our next major release.

What was the inspiration behind the new tri-class cards?

We really wanted to find a way to give each of these various classes new tools that they might not normally have, and giving them temporary access to cards that aren’t part of their normal kit was something that was enabled by the tri-class.

We [also] really wanted these crime families, all three of them, to feel like a combination of some of the most powerful classes. The one we started with was the Kabal, which was the priests, the warlocks, and the mages, all basically coming together to form this new organisation. And so once we knew we wanted to have the classes contributing to the identity of this crime organisation, it felt like kind of a natural fit to have this single card type that was essentially shared as a resource amongst all those classes.

Will the tri-class cards be in future content, or are they an expansion exclusive?

We don’t have plans right now to continue this on as a recurring feature. We have nine cards total that are going to be tri-class within Means Streets of Gadgetzan. We feel that’s right to put out and give a new tool to our players, and give a new chance to experiment a little bit and see how it does.

We’re always looking for feedback, and that may shape what we do with future sets. But for right now, this is something that is specifically designed around the three crime families in the Mean Streets of Gadgetzan.

How long does an expansion like Gadgetzan take from inception to the final product?

We’re probably looking at six to nine months out, when we’re thinking about the next set of expansions we want to work on.

Right now, we’re in the final stages of Mean Streets of Gadgetzan. We obviously announced it yesterday and it’s playable…and we’re looking to release this in the early part of December. So from a development perspective, we’re done at this point with all the card design, we’re done with the board; we’re basically in the final stages of bug fixing. 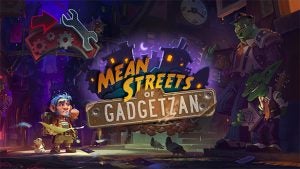 So in general we’re looking at about three card sets out into the future at any given point.

Will there be an ‘Adventure’ between now and the next expansion?

We haven’t really got to the point where we’re announcing what the next release is going to be. We feel like expansions book-ended the year pretty effectively, and so we are likely to be moving forward with more cards than before with next year. But overall, the pacing and the cadence to that is something we’re still tweaking.

What was the most challenging thing about developing Mean Streets of Gadgetzan?

The biggest thing was that this was a lot of new lore we created. This was probably the most new lore we’ve ever made for any of our releases since we launched Hearthstone.

There was a lot of new characters we had to build designs around, new context, new organisations, and so that put a lot of initial load on our design and art teams. And so I feel like the team did an amazing job, they really stepped up. We have this new kind of experience that we’ve never really had before in the context of the Warcraft universe that we’re really proud of.

How much does player feedback impact how you develop the game?

We listen to them a tremendous amount. The majority of the team is on the Reddit every day. We’re on the forums, we have a number of folks on team who are interacting with the community through Twitter, through Facebook. We come to conferences and talk to folks there, and the team is really working on trying to make itself as accessible as possible.

There are definitely some times where we feel like there’s a particular goal we have in mind, and certain parts of the community may not agree with what we’re trying to do. And so we’ll try to help explain our philosophies on why that is, but often we’re really trying to service a very broad community.

So while the most active voices are very important for us to listen to and act on, there are some times where we’re factoring in the broader community that may seem like we’re not necessarily acting on what the community says. 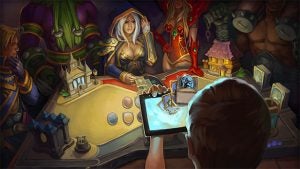 Hearthstone is a simple concept that’s easy to keep expanding on. Would you rule out a Hearthstone 2?

Who knows what the future can say. It’s hard to really rule out anything, because we don’t know what can change.

But I will say that we feel like there’s a tremendous amount of room to keep growing Hearthstone for many, many years to come. We have ideas going forward into the far future about ways we’d like to continue to grow the game, whether it’s through the cards that release, new features, different sorts of things that you can do on the esports scene, platforms we might like to explore, or whatever it is.

There’s just a lot of room to grow this game, and we have a very passionate team who would like to find ways to execute all those things and bring these ideas out to life.

Has Hearthstone’s success with esports changed the way you develop the game?

Yes. Initially, we weren’t really sure what role esports was going to take. Frankly, it was a great surprise to see how people were streaming it as soon as we launched the game. And a lot of people really wanted to watch Hearthstone, which was awesome.

It definitely shapes the features that we prioritise. We really put some time into getting a spectator client out. We’d like to make it better, so that when you’re looking at the opponent’s hand, it doesn’t look weird because it’s all upside down.

We are looking at doing features like the Heroic Brawl, which is a version of Tavern Brawl that we have coming up in the not-too-distance future, where you can compete for pretty significant prizes using a constructed deck. That’s something that came out of the feedback we had about esports players who want to see more of a tournament scene from Hearthstone. And while this isn’t a tournament mode, it’s a step towards it.

So yeah, in all those ways, it’s sort of shaping what we’re doing.

What do you think of Hearthstone? What would you like to see improved? Let us know in the comments.