Consumer electronics don’t tend to have the best environmental credentials. No matter what feel-good terms like “recycling” phones imply, the truth is that e-waste is a huge problem that’s only getting worse.

Korvaa, the pair of headphones pictured above, may offer part of the solution. Rather than being made from the usual environmentally troubling mix of plastic, leather and mesh, they’re made from yeast, mushrooms and microbe-grown materials.

A joint effort from Finnish design studio Aivan, VTT Technical Research Centre of Finland and Aalto University, Korvaa is just a prototype for now, and crucially doesn’t actually function as much more than a set of green earmuffs – there are no electronics contained within. But it is potentially a sign of how things could go if we humans take drastic steps to get to grips with our e-waste addiction.

“Synthetic organisms can produce a variety of desired chemicals, materials, medicine or fuels from renewable raw materials, waste fractions and CO₂,” Aivan explains. “This technology will have a paramount role in the transition from a fossil-based economy to a sustainable, circular bioeconomy.”

And the name? It’s a Finnish pun. “Korva” means “ear”, while “Korvaa” is a verb meaning “to substitute, compensate or replace.” Pretty smart for a headphone design based on substitutions.

The headband is 3D-printed bioplastic, made from yeast-produced lactic acid. The ear padding is Hydrophobin – a foamy protein produced by fungus and plant cellulose. The faux leather comes from another fungus, while the mesh over the speakers (or rather, where the speakers would go) is biosynthetic spider silk that comes courtesy of microbes. The outer foam – and looking closely, the least convincing part of the design at the moment – is a mycelium-cellulose composite.

Here are all the pieces broken down: 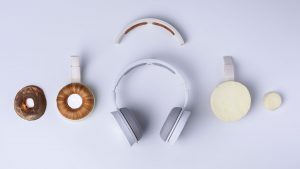 Would you be happy with a fungus-based headset? Let us know what you think of the design on Twitter: @TrustedReviews.