Update: Turns out that Halifax isn’t the only bank that’s jumped the gun on the Android Pay launch. HSBC has also sent its Android Pay setup web-page live before Google’s official launch, guiding users on how to download, install, and navigate the app.

Thanks for the tip, Mark.

Google’s Android Pay UK launch is imminent – so it appears, anyway – and the leaks just keep on coming.

The latest pre-launch whoopsie comes courtesy of popular UK bank Halifax, in the form of a dedicated Android Pay test web-page. The bank has set up a ‘Help Centre’ site with ‘Android Pay’ in the URL, but there’s nothing on the page – yet. 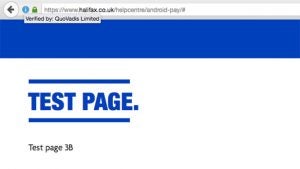 The web-page can be found at the URL:

That’s telling, because Halifax already has a page for Apple Pay in exactly the same format:

Google, unfortunately, hasn’t given a specific date for its UK Android Pay launch. However, the company did announce that the service would arrive in the “upcoming months” back in March. And with Google I/O scheduled for Wednesday, May 18, we wouldn’t be surprised to hear more on the matter.

Interestingly, UK coffee chain Pret A Manger has already started putting up Android Pay tags in at least one of its London stores, suggesting the launch may be imminent.

Android Pay is Google’s new mobile payment platform; it’s a big to take on Apple Pay. The service has already been live in the US for some time, and it looks set to land in the UK any day now. Customers with Android smartphones that feature built-in NFC chips will be able to pay for goods at contactless terminals in stores around the UK once the service goes live.

Have you ever paid for goods with Apple Pay or Android Pay? Tell us about your experience in the comments.