Guitar Hero Live will be the series’ first new release in nearly six years when it launches on consoles and mobile devices in Autumn 2015.

The new game marks a clean start for Guitar Hero, with a brand new guitar peripheral and no backwards compatibility with previously-purchased peripherals or music content.

The game is being developed by UK-based Freestyle Games, the outfit previously responsible for DJ Hero and DJ Hero 2.

The new guitar looks and feels very similar to previous models, but instead of five coloured fret buttons, it boasts six buttons arranged in two rows of three.

Other features of the guitar, including the strum bar, whammy bar and standard controller buttons remain roughly the same as before, although the “Hero” effect previously activated by tilting the guitar is now activated via a button next to the strum bar. 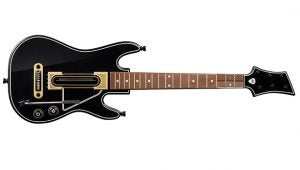 The game itself remains broadly similar to previous entries in the series, with notes coming towards you in the centre of the screen that need to be played in time to the music. The biggest presentational change is the removal of cartoon-like visuals in favour of a more realistic first-person viewpoint.

The game incorporates real-world video footage that has been taken from music venues. If you’re playing well, your band and the crowd will be pumped up; if you’re playing poorly, you’ll get disapproving looks and have bottles thrown at you.

No music has been confirmed at this stage, but we got to play Fall Out Boy – My Songs Know What You Did In The Dark (Light Em Up) and Black Keys – Gold On The Ceiling during our hands-on.

The other big new feature is Guitar Hero TV, which will be a 24/7 series of channels where you can play recent music from the likes of Ed Sheeran and Of Monsters and Men.

In this mode, the music video will play in the background, and you’ll be able to compete live with other people online. Activision confirmed to TrustedReviews that no subscription would be required for GHTV.

Guitar Hero Live will launch in Autumn 2015, with more information to be announced at this year’s E3 conference in Los Angeles in June.

It will launch for Xbox One, Xbox 360, PS3, PS4, Wii U and select mobile devices, which will be confirmed at a later date.

Activision’s Guitar Hero series is one of the most successful video games of all time, with the publisher claiming more than 25 million units sold worldwide, worth US$2 billion at retail.

However, declining sales across the music genre meant that the series was put on hold in 2009 with the release of Guitar Hero 5 and Band Hero.

Check out our hands-on with Guitar Hero Live for all the details and to hear from the team.