Both the Nvidia GTX 1660 Ti and the newly launched Nvidia GTX 1650 will now offer mobile variants. These cards won’t feature high-end RTX features such as ray tracing and DLSS, but do have Turing architecture, a unified cache and use clever Adapting Shading techniques to squeeze out as much performance power as possible.

With optimisation for modern games and battle royale titles, Nvidia claims some laptops boasting a GTX 1660 Ti will be able to run the likes of Apex Legends and Fortnite at 100fps and upwards. Despite such a great performance, these graphics cards are super affordable and will help to drive gaming laptop prices down.

The mobile variant of the GTX 16 Series cards are technically available from today (23 April 2019), but it will likely take a little longer for most manufacturers to launch laptops rocking the new GPUs.

Nvidia expects most GTX 16 Series gaming laptops will be available within the first month, so you won’t have to wait long.

The most appealing factor of the new GTX 16 Series gaming laptops is how affordable they will be, with Nvidia saying prices will start from £699.

We’re yet to test any GTX 16 Series laptops, so we can’t say for sure how good the performance will be. If the mobile GTX 1660 Ti is compatible to its desktop equivalent though, expect it to offer a solid Full HD performance easily capable of at least 60fps for most titles.

Nvidia suggests laptops with the GTX 1660 Ti will be up to 4x more powerful than devices with a GTX 960M card under the hood and have a 1.7x improved performance compared to laptops with a GTX 1050. This is an incredible boost if true, as it looks to revolutionise the budget space of gaming laptops.

Somewhat strangely, modern video games will see the biggest GPU boost with the 16 Series cards compared to the Pascal predecessors. This is because new titles take advantage of the Turing architecture’s smart Adaptive Shading techniques. Nvidia claims 16 Series gaming laptops will see a 1.5x performance improvement compared to portables with a Nvidia GTX 1060 card with the likes of Call of Duty: Black Ops 4 and Wolfenstein 2. 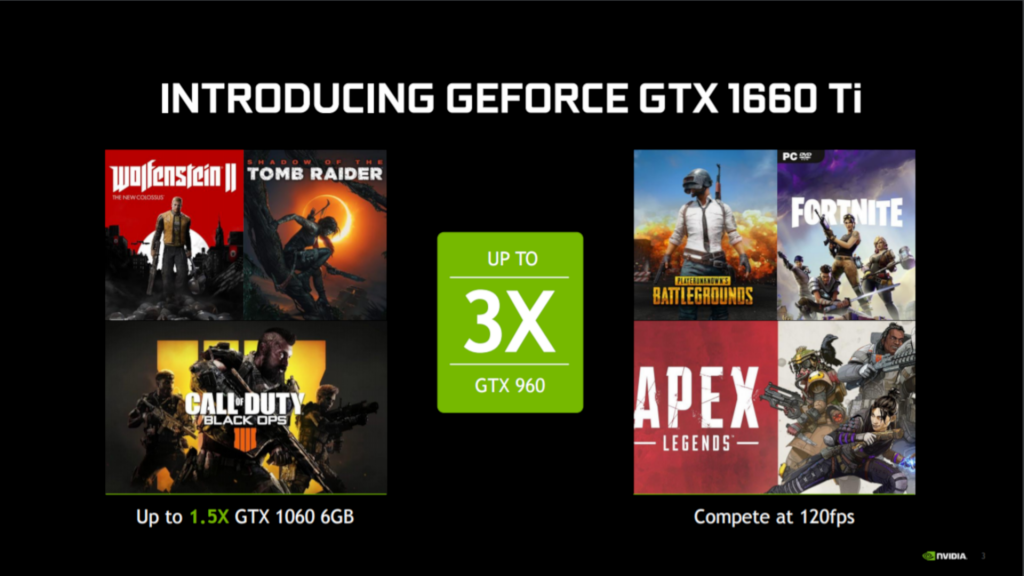 Nvidia has also confirmed there will be Max-Q variants of the mobile GTX 16 Series graphics card, which are essentially slimmer versions. This means manufacturers will be able to make laptops thinner without sacrificing too much performance.

For the full details on performance for 16 Series gaming laptops, keep an eye on Trusted Reviews for all our upcoming reviews.

According to Nvidia there will be around 80 different laptops launching with GTX 16 Series graphics cards. So far the following laptops with a GTX 1660 Ti GPU have been confirmed:

We will update this list once more GTX 16 Series laptops are confirmed.

Are you going to buy a GTX 16 Series gaming laptop? Tell us all about it @TrustedReviews on Twitter.