Gtech has launched its new generation of vacuum cleaner in a clear bid to dethrone Dyson.

The Gtech AirRam Mk2 is a follow-on from the original Gtech AirRam that launched back in2012. This time around, there’s a redesigned dirt-collection system, improved performance on carpets, hard floors, and crevices, and better power efficiency. Speaking at the launch, Nick Grey, Tech’s CEO and founder, said:

“With AirRam’s new approach to vacuum cleaner design it was inevitable we would learn a lot from seeing how the technology works in a wide variety of homes. We’ve watched and listened and made some really important changes o the product’s design.”

Here are the key features:

There’s a new AirLOC system that lets the Gtech AirRam Mk2 pick up larger debris from the surface of the floor, as well as cleaning in deep crevices.

The AirLOC system changes with each cleaning stroke, so when you’re going forward, the front face of the cleaner opens to larger debris. But on a backwards stroke, the AirLOC seals to the floor to collect fine dust from crevices. There’s also a shorter, wider air path for improved cleaning. 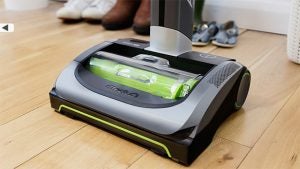 No one likes lugging a vacuum cleaner around the house, so the good news is that the Gtech AirRam Mk2 is seriously light. In fact, it weighs just 3.5kg, which is about half the weight of many of its upright rivals. Hopefully that means you’ll be able to cart it upstairs without too much difficulty.

There’s now a new dirt-collection system that should make it easy to empty the cleaner without creating a huge mess.

In the new system, dirt is collected into the head of the vacuum, moving it 4cms before compressing it into a “unique” snail-shell bin. Thanks to the compression technology, Gtech says you’ll be able to pack 2.4-litres of dust and debris into a 0.8-litre bin.

Once it’s full, you can eject the tubular bale of crud straight into the bin by sliding the dirt ejector arm. It’s like a gun that only shoots dirt – always useful, eh?

Packed inside the new AirRam is a sizeable 22V lithium-ion battery. According to Gtech, you can clean your entire house (mansions not withstanding) twice on one charge, thanks to a 40-minute run-time. You can check how much charge is left using the four-stage LED display too. 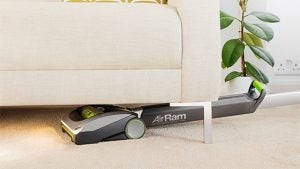 5. Easy to clean and operate

To clean the new AirRam, all you need to do is slide out the filter, tap it clean, and replace. There’s also a release button on the brush bar, which allows for complete removal.

Operation is also a breeze, with Gtech modifying the on-off button to make it foot-operated. There’s also a telescopic handle that’s activated by a simple button mechanism, locking or unlocking the handle at full-height during operation, and half-height for storage.

The final perk is that it has an “ultra-low” profile, which should make it easy to reach under chairs and tables. There’s also an edge-cleaning technology that lets you get into awkward corners.

6. It’s not too expensive

The great thing about this cleaner is that it won’t clear out your bank account. Gtech is selling the new AirRam Mk2 for just £199 here:

What do you think of the Gtech AirRam Mk2? Let us know in the comments.