GoPro’s second attempt at a 360 camera

The GoPro Max is GoPro’s second 360-degree camera, following 2017’s GoPro Fusion. It’s smaller, more versatile and can behave a bit like a GoPro Hero 8 Black, making it a great option if you’re after an action camera that can do it all, rather than just capture 360-degree video.

However, the two year gap has predictably seen the cost of the original Fusion drop a lot. You can now buy a Fusion for around £375. Is the Max worth the additional £100, and should those who already own a Fusion consider upgrading?

Let’s compare these two 360-degree GoPros to see how much of an improvement the new one is.

The Max is a lot smaller than the Fusion, and in person the difference is even more marked than the numbers might suggest. Where the Fusion seemed a little out of place when strapped to a bike helmet or handlebars, the Max hardly seems that different to a Black camera.

Its internal mechanics have been simplified too. The Fusion has two SD cards, because it is effectively “two cameras back to back”, according to GoPro’s Vice President of Product Management Pablo Lema. 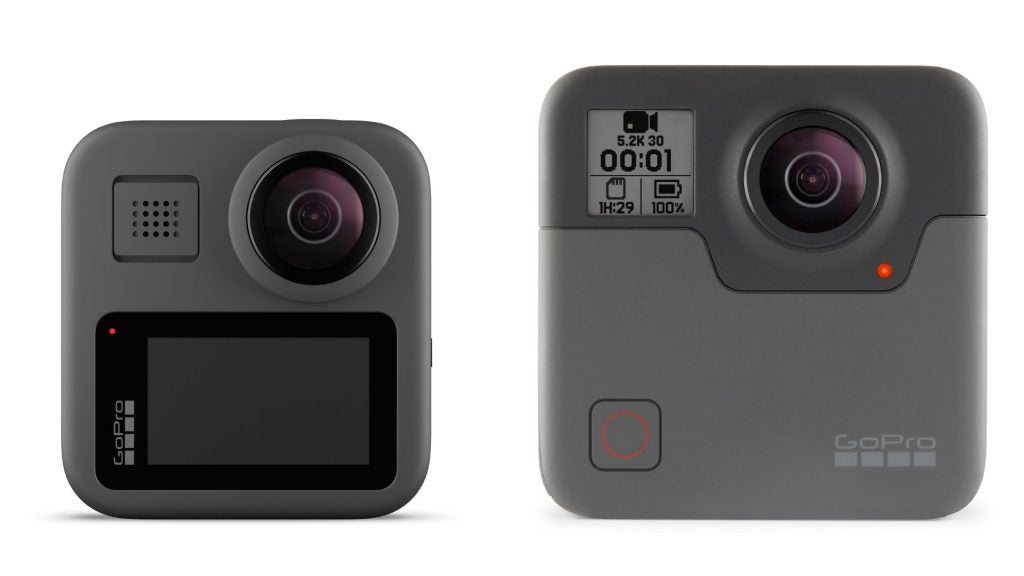 Spot the difference – the Max (left) and the Fusion (right)

The Max has just one, a microSD card. This does raise the question of bit-rate, as it has to write the data from two cameras through one pipeline. The Fusion’s max bit-rate is 120Mbps, the Max’s 78Mbps, and that’s when shooting flat footage at 1440p. However, there’s a leveller. The Max uses the more efficient H.265 codec, instead of MP4.

Both cameras have 5ATM water resistance, enough to withstand submersion and snorkelling. But their lens styles cause distortion underwater and they do demand nicer treatment than a GoPro Black series.

Their 180-degree lenses stick out from the casing, making them more susceptible to damage. GoPro sells little plastic domes for the Max that clip onto each for more perilous shoots.

The GoPro Max has a 1.7-inch screen on the back, or the front – when using one side of the camera’s view you can flip it over for a vlog-friendly setup.

This display is crucial to one of the Max’s biggest changes: you can shoot non-360 video. 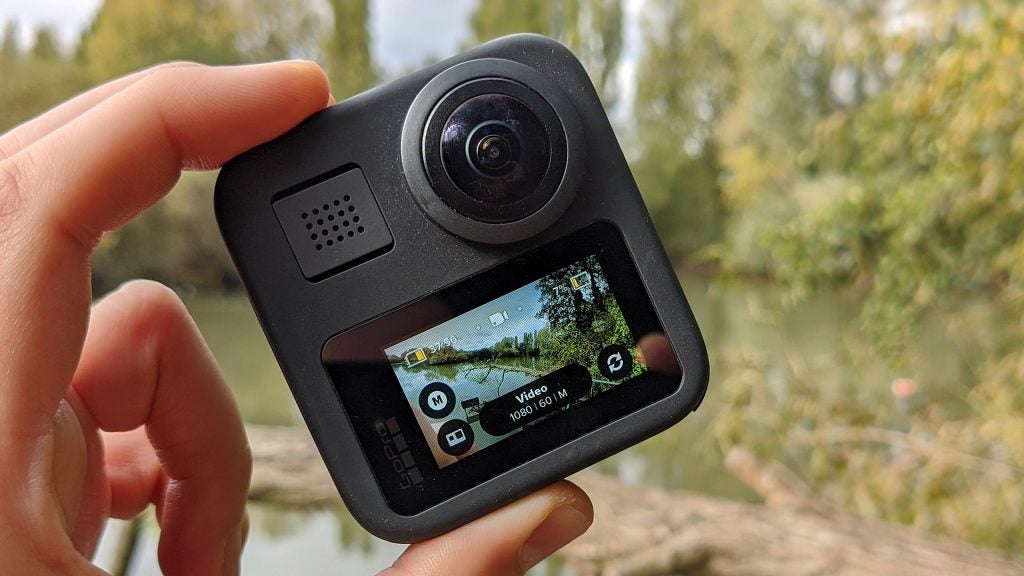 The Max’s LCD screen makes it perfect for vlogging

The Fusion does not have a conventional LCD screen, just a small monochrome one that shows the mode, battery life and the space left on your SD cards. It doesn’t allow for composition because there’s none to be done aside from pointing a lens at the subject to make sure it’s in the sharpest part of the frame.

The Max and Fusion seem very similar if you just look at the raw specs of their 360-degree capture. They shoot 360 video at up to 5.6k resolution, 30 frames per second, with 3k resolution is also available.

GoPro’s newer Max puts a load more modes at your fingertips. There’s TimeWarp, the time lapse video mode introduced in the Hero 7 Black, and four non-360 action camera views comparable with those of a Black camera. 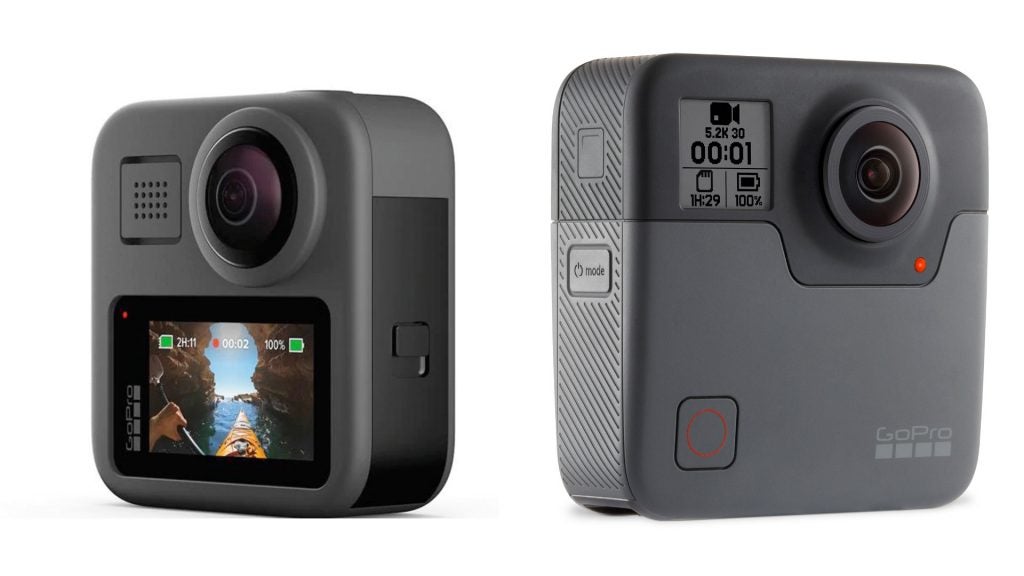 Only the Max (left) can take flat video and images, while both shoot 360 video

GoPro told us the lenses and sensors of the two cameras are fairly similar, but the max resolutions of their stills are actually different. The Fusion takes 18-megapixel photos, the Max 16.6-megapixel ones, but this is because the Fusion can shoot RAWs. Its JPEGs are still 16.6MP.

The Max has a new Powerpano feature too. It takes a 270-degree photo using a 3 second timer to let you get the camera in place. Powerpano captures all of the scene bar the bit with you in it, unless you flick the view around for a panoramic selfie. 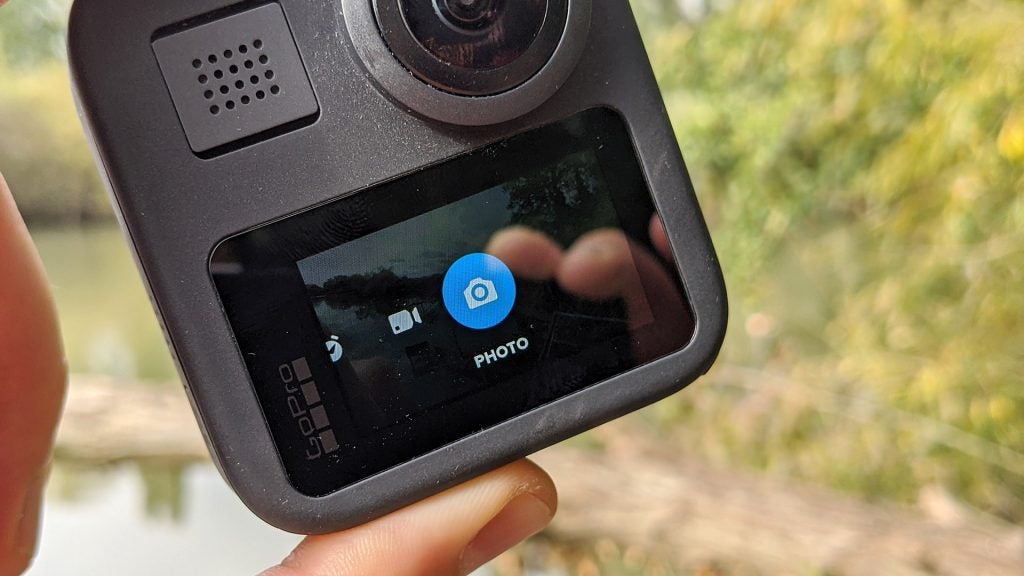 The Max’s LCD screen also acts as a control panel

The Max also supports H.265 (HEVC) encoding, where the Fusion relies primarily on H.264. The H.265 is a much more efficient codec, and this change is down to the Max’s use of the GP1 processor, used in Black models since the Hero 6 Black.

Related: Best GoPro 2019 – which GoPro should you buy?

The Fusion and Max both have the right recipe for perfect stabilisation. As they record the entire world around you, there’s effectively no limit to the amount of movement buffering they can provide. GoPro’s software makes excellent use of this scope.

As such, the only real limit becomes blurring of the frames themselves during motion, which is a question of weighing the benefits of lower ISO against the incursion of noise when using faster exposures in lower light.

These cameras are stabilisation powerhouses, but the Max has another trick. This is Horizon Levelling, which keeps your footage dead straight even if the camera itself is not. Fusion users can apply this kind of effect in post, but the GoPro Max does the job for you. This isn’t mandatory, of course, but a mode you turn on and off in the shooting settings menu.

Related: GoPro Mods – what are the new accessories and when are they out?

The Fusion has four microphones designed to capture planar audio, sound from all around the camera but on a single plane. This time GoPro has added an extra two cameras for “360-degree” audio.

But where are they? The Fusion has one mic on the front, and three on the top. Max has two mics on its top, mic grilles on the front, back, and one of its sides. This suggests there may be an additional mic in the front grille positioned to take the place of the mic that might otherwise be on the mic-free side. 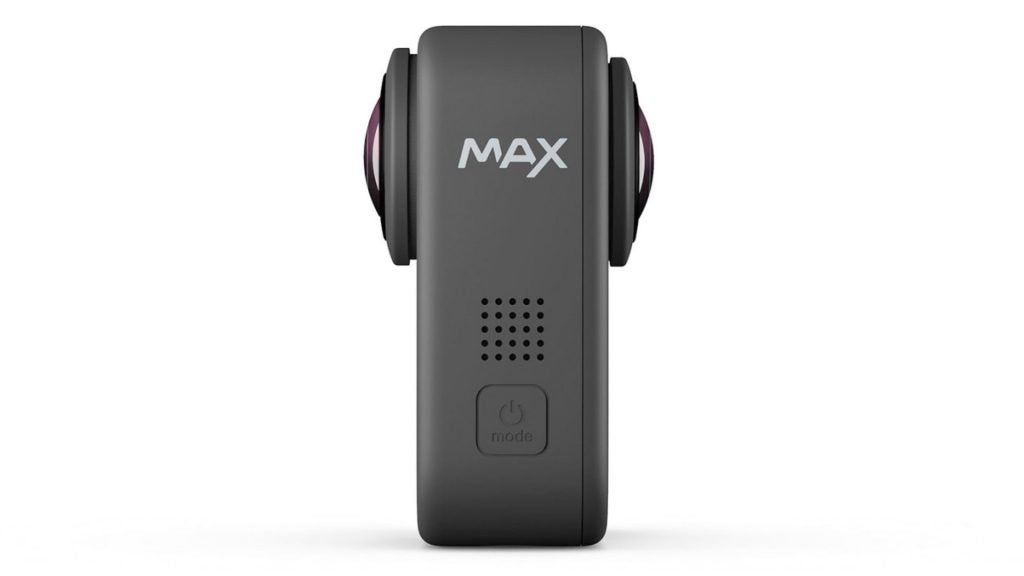 The Max packs in six mics alongside its two lenses

There isn’t one on this side because it’s where the Max’s battery door sits.

Neither camera has a 3.5mm mic input, and neither supports the USB-C mic adapter available for the Hero Black range. This is a bit of a disappointment considering the Max uses the same GP1 processor platform as the Hero 8 Black.

Back when the Fusion was released, the workflow was not really as promised. Early Fusion Promos showed incredible editing, showing off the potential of the 360-degree capture.

OverCapture was the concept that let you do this, but when using your phone you had to tilt the phone itself and pinch-zoom during playback to record the editing sweeps and zooms you wanted. This is now changing, but the changes will affect both Fusion and Max owners. 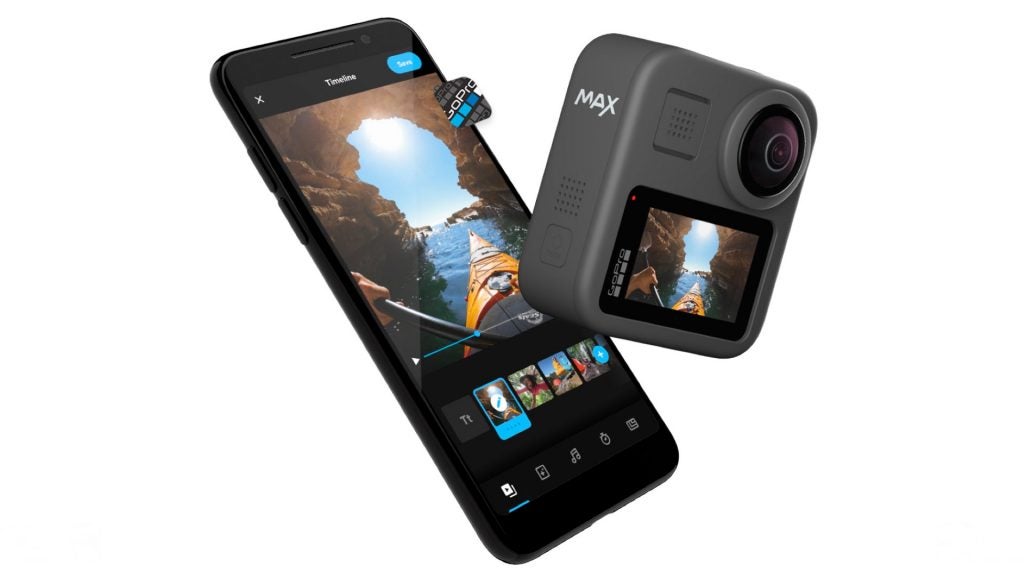 Say goodbye to OverCapture and hello to Reframe

The new form of OverCapture is called Reframe, and it uses keyframes rather than a sort of “live performance” of the camera moves you want. It’s the approach you might have used if you edited Fusion footage on pro video software with a plugin.

This is great news for those who have no intention of spending hours fine-tuning their edits, and want dramatic-looking, smooth results in just a few minutes.

While the Max doesn’t look fundamentally all that different from the outside, the efficiency of its new internal design lets the camera use a much smaller battery.

It’s a 1600mAh cell, to the Fusion’s 2620mAh. And battery longevity is not really all that different.

The Fusion lasts 75 minutes of straight, maximum resolution 360-degree capture, the Max 78 minutes. Of course you also have the option of “standard” action cam shooting with the Max. It lasts 110 minutes in this mode.

This is actually significantly longer than the Hero 8 Black’s 81 minutes. You really feel this difference when out shooting for the day.

The Max can use batteries made for recent Hero Black models too, but the Max’s one has a higher max discharge rate, required for some modes. As such, some of the most demanding features will be disabled if you use your Hero 7 Black’s battery.

The GoPro Max’s most important improvements mean more out in the real world than they do on paper. You can do more with a Max than a Fusion, and use it like a normal action camera.

It’s not a Fusion and a GoPro Hero 8 Black “in one”, as its non-360 image quality isn’t a match for the Black’s, but unlike a Fusion it’s all the action camera most people would need.

Its arrival also brings editing of 360-degree footage to the level of ease and functionality we hoped for in the first place. Those who already own a high-quality “normal” action camera may want to consider looking for a Fusion at a clearance price while they are still around. But everyone else is better off with a Max.