The GoPro Hero 8 Black is finally official – and it looks, well, very much like a GoPro. But while it might initially appear like not much has changed, there are a few differences from the GoPro Hero 7 Black that could sway you towards the new model (or, perhaps, towards its cheaper predecessor).

The big news, of course, are those new mods for the Hero 8 Black that add an external microphone, LED light and display to the device to beef up its vlogging credentials. But with those not due out until 2020, what treats are there for you to enjoy in the meantime?

Here are all the big new features you’ll get by snapping up the new Hero 8 Black instead of GoPro’s previous flagship, which remains on sale. 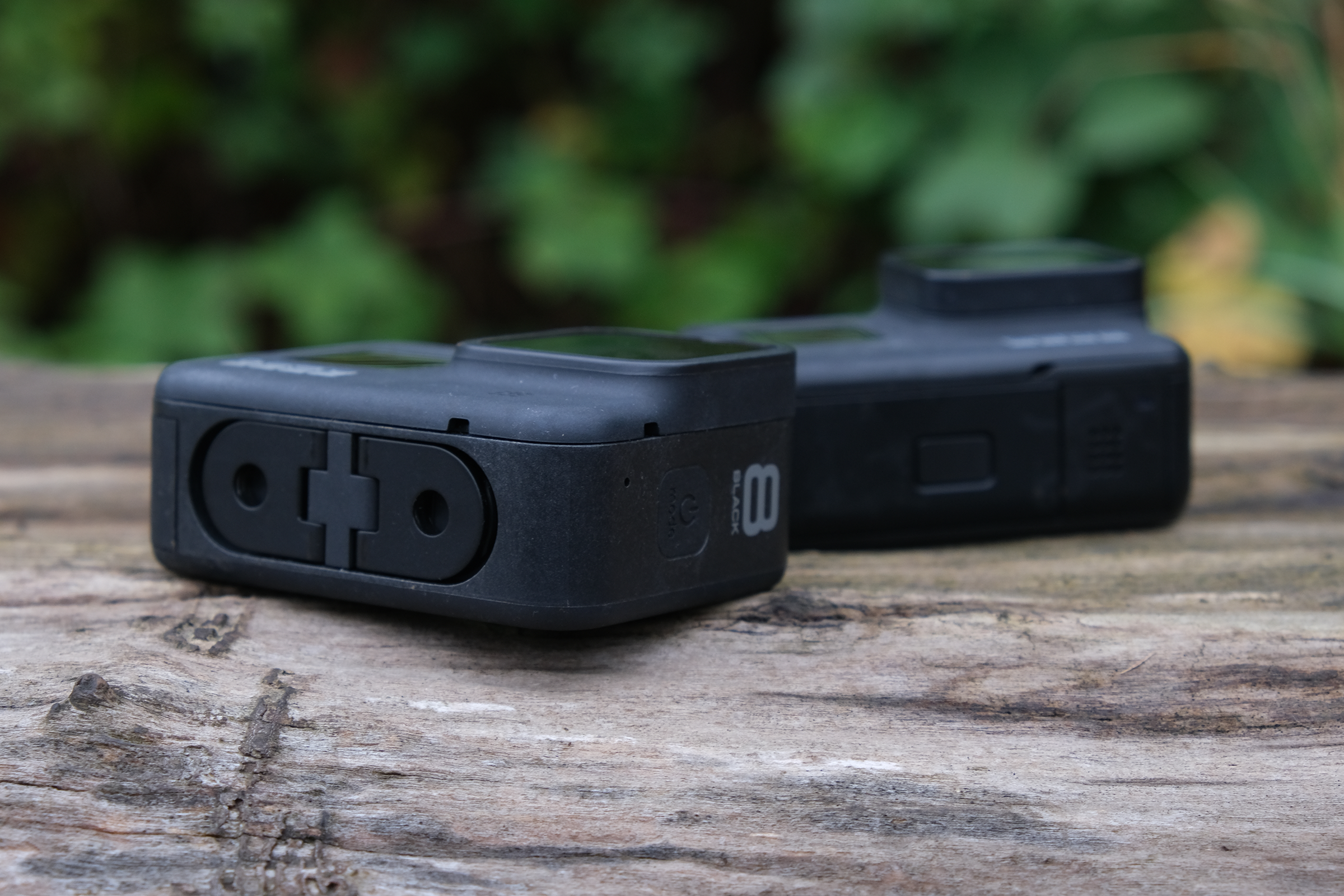 The GoPro Hero 5 Black was the first GoPro to be fully waterproof without a case, but you still needed to attach a frame to mount it on anything. Well, the GoPro Hero 8 Black has finally fixed that. On its underside you’ll find some folding prongs that help it slot into all standard GoPro mounts without any need for a frame.

This may not sound like much, but it means you can now remove your microSD card or swap out the battery while the Hero 8 Black remains mounted. This is still technically possible on the Hero 7 Black, because the frame has an exposed cut-out for the ports. However, to see them you’ll need to remove the camera’s port cover – which means it’s no longer waterproof.

This streamlined setup means the Hero 8 Black is around 14% lighter than the Hero 7 Black in its frame, although we’ve yet to fully test that built-in mount to destruction. Reassuringly, there are screws in place to let you swap in a new mount if that built-in one becomes broken.

2. GoPro Hero 8 Black vs Hero 7 Black – The Hero 8 Black has HyperSmooth stabilisation for all frame rates, plus a new Boost mode

The Hero 7 Black’s best feature was – and still is – its electronic HyperSmooth stabilisation. This feature is particularly handy for the kind of videos most people want to shoot on a GoPro (bone-vibrating sports, for example).

While HyperSmooth is available in most modes on the Hero 7 Black, you can’t use it in some of the more demanding ones with high frame rates. Thanks to a new battery, the Hero 8 Black offers HyperSmooth 2.0 stabilisation in all shooting modes – including 1080p at 240fps, for some buttery-smooth slow motion.

One other new feature on the Hero 8 Black is HyperSmooth Boost. If you’re shooting something particularly challenging – a close-up vlog or cycling down a cobbled street – then this mode will crop your frame slightly in return for even smoother, gimbal-like stabilisation.

So if this new stabilisation is powered by a new battery, will you be able to use old units in the Hero 8 Black? Fortunately, the answer is yes. The new one is exactly the same shape as the standard GoPro AABAT-001 battery, so any existing batteries you have will work in the Hero 8 Black (just without the stabilisation benefits across all frame rates). The new battery will work in older GoPros, too. 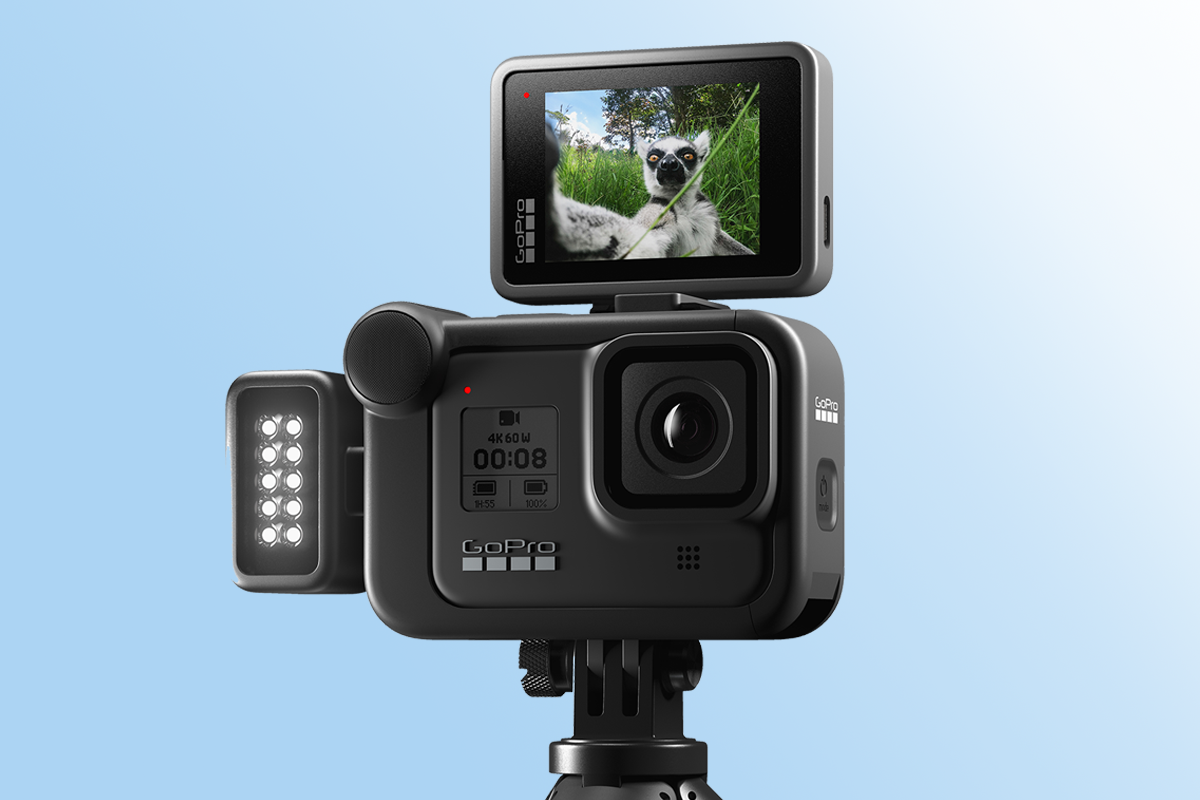 3. GoPro Hero 8 Black vs Hero 7 Black – The mods bring new vlogging talents, but only for the Hero 8 Black

If the Hero 7 Black’s USP was HyperSmooth, the Hero 8 Black’s equivalent is its mods. These three accessories together turn the Hero 8 Black into a significantly more professional vlogging camera.

The reason that the mods are a little further down this list is that, unfortunately, they won’t be available until 2020. In addition, due to the Hero 8 Black’s slightly different dimensions, they’ll also only be compatible with GoPro’s latest model.

Still, when they do finally arrive, the mods will give the Hero 8 Black a few superpowers we haven’t really seen on an action cam. The Media Mod has a built-in shotgun mic for much-improved audio, plus a 3.5mm mic-in, micro-HDMI out, a USB-C port and two cold shoes for other accessories.

The Display Mod brings a 2-inch display to help you frame your shot, plus an integrated 680mAh battery to ensure it doesn’t suck juice from your action cam. Lastly, the waterproof Light Mod beams out 200 lumens to help illuminate your subject, and is compatible with most GoPro mounts and accessories, so you can mount it to a tripod or headstrap.

Together, they look like a great all-in-one solution with the Hero 8 Black. It’s just a shame we’ll have to wait a while to see them. 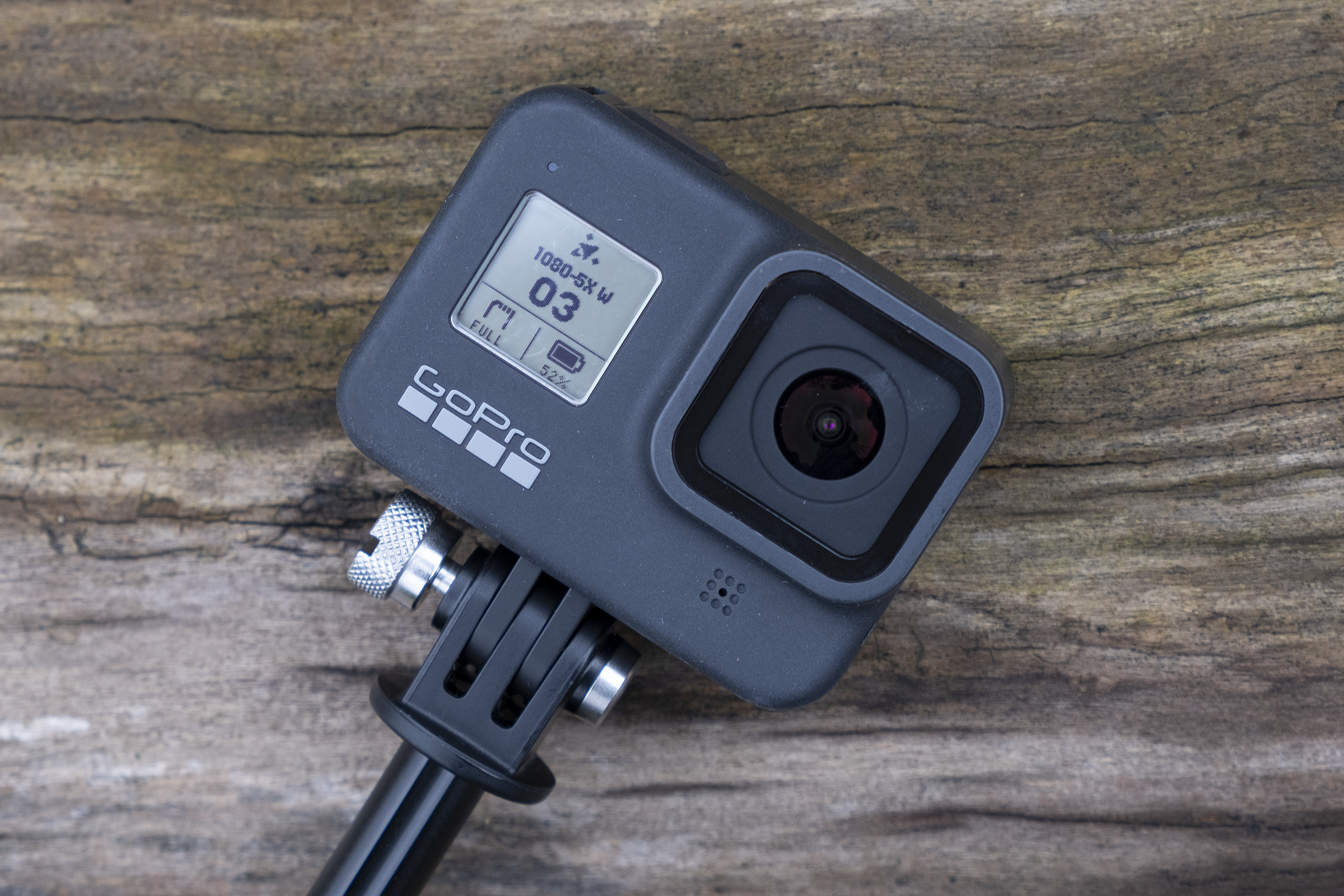 While its built-in audio won’t be able to match the Media Mod’s shotgun mic, the Hero 8 Black does have a new wind-optimised front microphone.

GoPro promises that this helps produce “higher fidelity audio” – and from our cycling tests against the Hero 7 Black so far, it certainly does a better job of handling wind noise.

It’s unlikely to be a reason to upgrade from the Hero 7 Black, but it could well be a boon if you plan to shoot a lot of fast-moving sports videos and would rather keep the natural audio, rather than resorting to masking with it stock music. 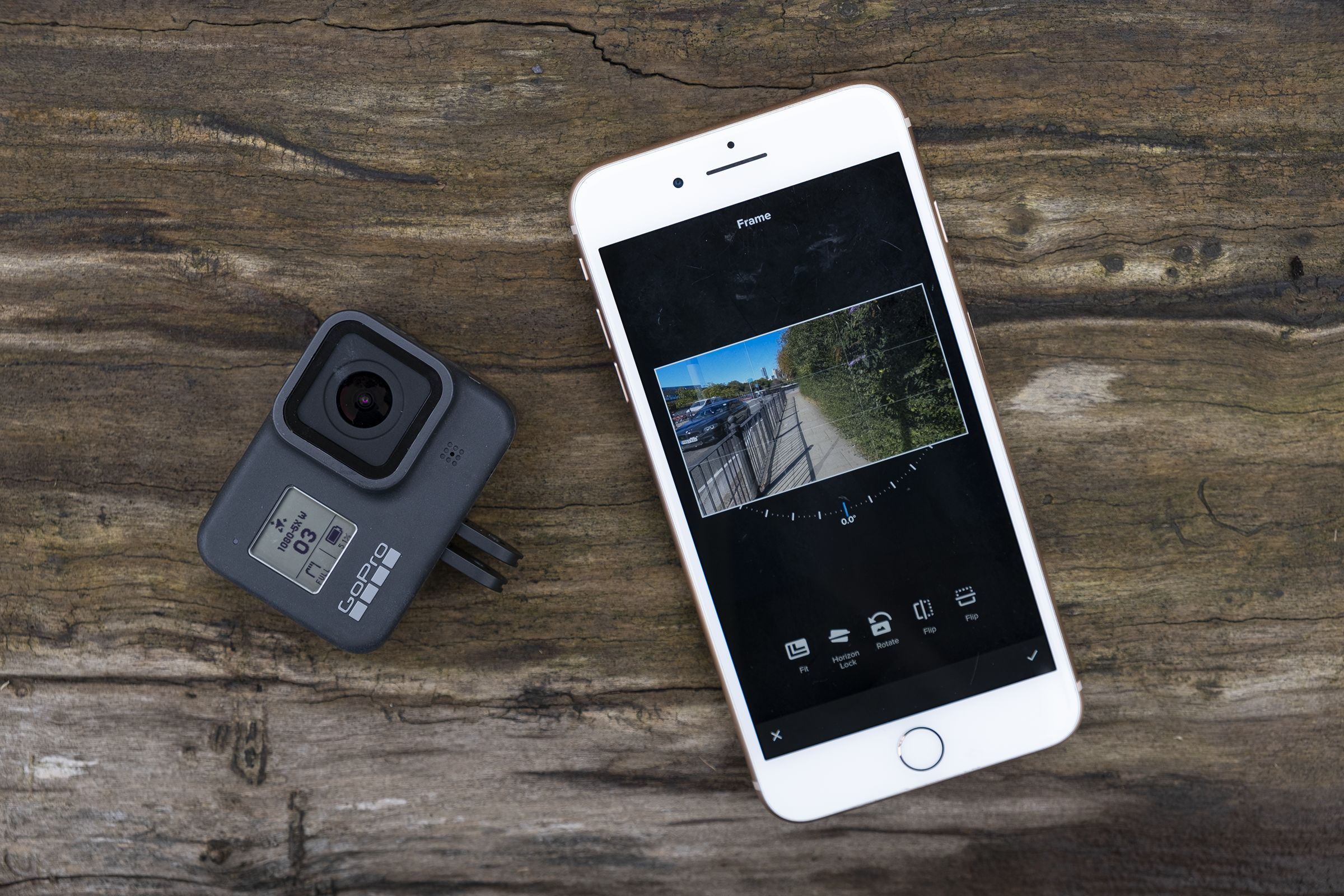 5. GoPro Hero 8 Black vs Hero 7 Black – The Hero 8 Black gets some minor photo and software tricks, but nothing revolutionary

Given the power (and water resistance) on offer with the latest smartphones, it’s unlikely that many GoPro owners use their Hero cams for stills shooting. But GoPros can be handy backups for extreme situations. In light of this, the Hero 8 Black brings some improvements in this area that include an improved SuperPhoto 2.0 and LiveBurst shooting.

The former is simply a minor tweak to GoPro’s HDR stills processing, while LiveBurst shows potential for unpredictable scenes – it captures 1.5 seconds of 12-megapixel images (or 4K 4:3 footage) before and after you press the shutter. You can then either pick the best still, or share it as a three-second clip.

Perhaps the most usual changes are in the UI. There are now customisable presets for different video settings (you can create up to 10 of your own), and it’s also now possible to decide the function of the four shortcut buttons (for example, to change the Field of View or even Bit Rate). This brings it up to speed with the DJI Osmo Action, which has a handy Custom menu for your most-used settings.

GoPro wouldn’t say whether or not these will be coming to the Hero 7 Black via a firmware update, but it seems likely that they’ll be kept as another sweetener for Hero 8 Black owners.

GoPro Hero 8 Black vs Hero 7 Black – How do the specs compare?

Looking for more of a gritty, specs-based comparison of the two action cameras? Here’s a side-by-side table showing the relative merits of the Hero 8 Black against its predecessor.