A wide selection of top movies can now be purchased in 4K resolution via the Google Play Movies & TV Shows app.

While a small selection of 4K content has been gradually tricking out over the past couple of weeks, Google made it official in a blog post on Tuesday.

The initial selection includes 125 titles that are currently available for purchase in the US and Canada for those with a Chromecast Ultra, Sony Android TV and Xiaomi Mi 3 box.

Judging by the screenshot accompanying the blog, it appears as if rentals won’t be far behind either. 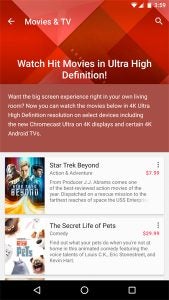 Google says it is offering a free 4K movie to anyone who buys a Chromecast Ultra device, which of course supports the higher resolution. The free selection appears to be limited to Ghostbusters (the new one) and Captain Phillips.

The current line-up of movies available to buy includes Batman vs Superman, The LEGO Movie, Lucy, The Amazing Spider-Man and Mission Impossible: Rogue Nation (via CNET)

While the prices may be expected if not entirely agreeable, Google has certainly beaten Apple to the punch here, with not even the merest hint of 4K iTunes music, nor an Apple TV set-top box that can handle them emerging from Cupertino.

Should you buy a 4K TV right now? Head-to-head

Will the impending arrival of 4K movies in the UK, will this encourage you to treat your 4K telly to a Chromecast Ultra? Share your thoughts in the comments section below.