What we know about the Google Pixel Watch 2017

(Update: 3 April 2017): So it turned out that Google’s long-rumoured Pixel Watches were actually the now-official LG Watch Sport and LG Watch Style. As rumoured, these two wearables were the first to run Google’s Android Wear 2.0 straight out of the box. But alas, neither was an official ‘Pixel’ device.

So we’re going to keep this page alive in the hopes that perhaps Google will release an official ‘Made by Google’ Pixel watch later this year, and will update the page with rumours accordingly. Until then, read on for the original Pixel Watch rumours as they were prior to the announcement of the new LG watches.

The good news is that Google has confirmed that the Pixel line isn’t an experiment, and has vowed to launch a Google Pixel 2 smartphone at some point in 2017. That means there’s renewed hope for a possible expansion of the Pixel line into wearables too.

Back in July, we first heard whispers of a new Google smartwatch being built under the Nexus sub-brand. But Nexus is now history, replaced by Pixel earlier this month with the debut of the Google Pixel and Pixel XL smartphones.

Unfortunately, details are still thin on the ground. The two main sources for information thus far have been prominent leaker and journalist Evan Blass, and specialist blog Android Police, which has published a number of exclusive reports on the watch.

Read on to find out what we know, and what we don’t, about the Google Pixel Watch.

Aside from pricing, the release date is probably where we’re most clueless. The best information we have right now comes via a tweet posted by Evan Blass, which reads: “Google’s two smartwatches will be released with Android Wear 2.0 in Q1 2017.”

That’s especially vague, leaving January, February and March open as equally prospective launch windows. We know January is already counted out, but the Pixel Watch could still turn up at MWC 2017, a Barcelona-based conference that runs from February 27 to March 2.

Alternatively, Google is rumoured to be planning a dedicated event on February 9, where the company plans to formally release Android Wear 2.0. That would be a perfect launchpad for a new Google Pixel Watch.

The Google I/O developer conference is always a possibility, but that tends to take place in the second quarter of the year. However, it would be the perfect opportunity to fully launch Android Wear 2.0, and what better way to roll out the software than with new flagship devices to go with it?

When it comes to Pixel Watch design, the best lead we have so far is this image, published by Android Police: 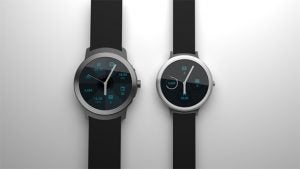 Apparently, Angelfish is the larger watch on the left, and has a bigger display, button and lugs compared to its sibling. The other watch is Swordfish, and appears to be significantly smaller than Angelfish. It also has a cleaner, more minimalist design and a much thinner strap. And on the matter of straps, Android Police reckons that Google’s MODE Android Wear won’t work with Angelfish.

Regarding dimensions, Android Police puts the Angelfish at 14mm thick, with a case diameter of 43.5mm – that’s smaller than the largest Moto 360 (46mm), but bigger than the largest Apple Watch (42mm). The Swordfish, meanwhile, has a more traditional 42mm diameter, and is purported to be 10.6mm thick – that’s 0.8mm than the Moto 360.

So far, we’ve only heard that Angelfish will ship in a dark matte grey colour called “Titanium”. Meanwhile, Swordfish is expected to debut in three different colours: silver, titanium and rose gold.

The final interesting titbit is that neither of the watches appears to suffer from a “flat tyre” on the display. That’s good news, as the dead pixel space that featured on the Moto 360 was highly controversial, and initially blighted all hopes of having an attractive, round-faced smartwatch. Thankfully, Google hasn’t made the same mistake.

Unfortunately, we should point out that these images aren’t entirely authentic. To protect its source, Android Police had to recreate the source material, which means the devices depicted may not be entirely accurate.

It’s also worth mentioning that these watch designs were from an early prototype stage, so there’s every chance that one, or both, of the watches may look completely different – and possibly may never even launch.

According to Android Police, Angelfish will be a “full-on” standalone smartwatch. That’s because it features more capable hardware, including a 4G/LTE modem, GPS, and a heart-rate sensor. And Swordfish, by comparison, will miss out on some (or maybe all) of those features.

There’s little else we know for certain, but we can take a guess and say that the Google Pixel Watch will probably feature one of Qualcomm’s Snapdragon Wear chips. After all, Google Pixel has shown no reluctance towards using Qualcomm chips in its smartphones, including the new Google Pixel and Pixel XL smartphones, both of which featured the top-end Snapdragon 821 system-on-a-chip (SoC).

Then, in May, Qualcomm announced the Snapdragon Wear 1100, which features a Cat.1 modem, plus support for Wi-Fi, Bluetooth and audio input. There’s also built-in iZat location tech that will let a wearable work out position, velocity and time.

Qualcomm announced the Snapdragon Wear 1100 chip in May 2016

For the record, both chips are built on a 28nm process and support 4G connections. But while the SW1100 only supports a simple 2D user interface, the SW2100 can handle displays with a resolution of up to 640 x 480 pixels at 60 frames per second. The SW2100 also supports faster LPDDR3 RAM (compared to the SW1100’s LPDDR2), and features four Cortex-A7 cores and an Adreno 304 GPU (with support for OpenGL ES 3.0). By contrast, the SW100 has a single Cortex-A7 core and a fixed-function GPU.

If the Google Pixel Watch exists, we’d expect it to run on the Snapdragon Wear 2100. However, there’s a very good chance that Qualcomm could announce a new Snapdragon Wear chip this year. Stay tuned.

As we mentioned earlier, Blass and Android Police both expect the Google Pixel Watch to run on Google’s upcoming Android Wear 2.0. The original Android Wear software launched way back in March 2014, but the smartwatch market has come a long way since then.

At Google I/O 2016, Google announced Android Wear 2.0, introducing new features such as standalone apps, handwriting recognition, a keyboard, a dark background for OLED watch displays (to save battery) and a new circular UI. The software is only available in preview right now, and only supports a handful of watches. It’s expected that the full version will go live to consumers this year.

According to Android Police, the Angelfish smartwatch will support standalone apps (courtesy of Android Wear 2.0) i.e. it won’t need a nearby smartphone to provide processing power for software, unlike the original iteration of the Apple Watch. It’s not clear whether the Swordfish smartwatch will be similarly capable.

Android Police also reckons that the new watch(es) will be Google Assistant enabled. That’s Google’s virtual assistant, an extension of Google Now that allows for two-way conversation, just like Apple’s Siri, Amazon’s Alexa, and Microsoft’s Cortana. Google Assistant is already available via the Google Allo messenger app or the Google Home smart speaker, if you want to try it out.

And finally, Google has informed developers that they should have their apps ready for the new OS by “early February 2017”, which suggests that a full consumer launch of the software may be imminent.

Google Pixel Watch Price: How much will it cost?

Honestly, we have no idea. Nothing has leaked regarding the Google Pixel Watch price, so we’re in the dark.

The best we can do is reel off some of the more popular smartwatches below, to give you an idea of how much these things usually go for:

What would you like to see from a Google Pixel smartwatch? Let us know in the comments.