Google is hotly tipped to release its latest own-brand Android flagships, the Pixel 4 and Pixel 4 XL, later this year – and a new leak looks to have just confirmed the codenames of the two devices.

The droid aficionados at 9to5Google deserve all the credit here, having dug into the latest beta version of the Google app to unearth links to two hitherto unknown devices, ‘Coral’ and ‘Needlefish’.

These curious names first surfaced via the Android Open Source Project community, but as luck would have it, the Google app code made plain that ‘Coral’ was the codename for the Pixel 4, while the Pixel 4 XL is dubbed ‘Flame’.

The ‘Coral’ codename for the Pixel 4 matches up nicely, both with Google’s aquatic themed naming practices and previous Pixel 4 rumours.

Specifically, it aligns with an alleged Pixel 4 benchmark leak, which saw a mystery device known as ‘Coral’ pop up on Geekbench running a Snapdragon 855 SoC with 6GB of RAM. 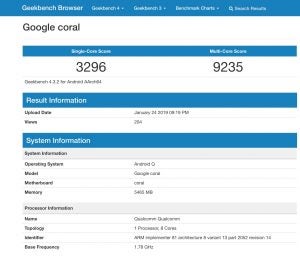 The ‘Flame’ codename for the Pixel 4 XL is more puzzling at first glance, but as the blog’s eagle-eyed commentators point out, there is a sea dwelling creature known as the flame angelfish, which would make sense.

This would still leave us none the wiser as to what device ‘Needlefish’ is, though, but the oft-rumoured Google Pixel Watch is one possibility.

First though, Google is expected to release ‘lite’ versions of its 2018 flagships, the Pixel 3 and Pixel 3 XL.

These are likely to be called the Pixel 3a and Pixel 3a XL, as a recent leak on Google’s own online storefront all-but-confirmed.

While Google has yet to announce an event for these devices, the fact that Google I/O 2019 is now just around the corner (its dates are May 7-9) leads us to believe this more affordable duo are ready to hit the catwalk.

Which new Google device are you most looking forward to in 2019? Let us know on social media @TrustedReviews.