Google rounded out its I/O 2019 developer conference by unveiling two new additions to its Pixel phone family: the Google Pixel 3a and Pixel 3a XL.

As their names suggest, both phones follow closely in the footsteps of the existing Pixel 3 and 3 XL, save for one distinct difference – they cost almost half as much as their flagship siblings.

Following underwhelming adoption of its Pixel 3 devices, it seems Google is determined to get phones in users hands by distilling down the Pixel 3 recipe into two more affordable reimaginings.

Beyond size, these phones are, for the most part, identical, but there are a handful of differences worth noting.

Google Pixel 3a vs Pixel 3a XL: What’s bigger apart from the size?

The Google Pixel 3a shares in the standard Pixel 3’s compact nature, granting you a 5.6-inch Full HD+ OLED display with a tall, slim footprint thanks to its 18.5:9 aspect ratio.

The Pixel 3a XL sports a wider, squatter silhouette, proportionally speaking, as a result of its larger 6-inch 18:9 Full HD+ OLED display, this makes the latter better-suited to enjoying media and gaming, although neither phone’s screen features HDR support, as on the standard Pixel 3s. 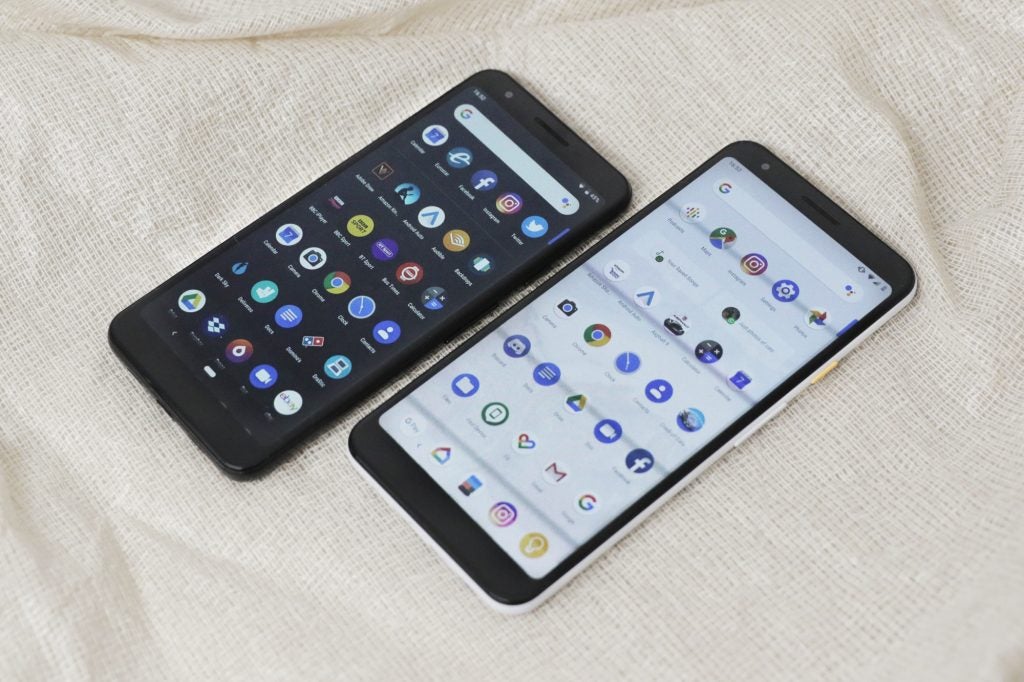 Both phones do at least enjoy stereo loudspeaker output, each with a forward-facing and downward-facing pair of grilles. Headphones users are also welcome whichever 3a you choose, thanks to the reinstatement of the standard 3.5mm headphone jack – a feature we haven’t seen on a Pixel phone since the original pair launched back in 2016.

Based on our initial testing of both phones, the 3a XL outlasts its smaller companion, heading towards two days of use per charge, while both phone can be fully replenished via their 18W fast charging in about an hour and a half (more accurately 80 minutes in the Pixel 3a’s case).

Google Pixel 3a vs Pixel 3a XL: How differently do they perform?

Pulling the Pixel 3 experience down to a mid-range level requires more fitting hardware and as such, both the Pixel 3a and 3a XL are powered by Qualcomm’s Snapdragon 670 chipset (in place of the 845 in both Pixel 3s), as well as 4GB of RAM. 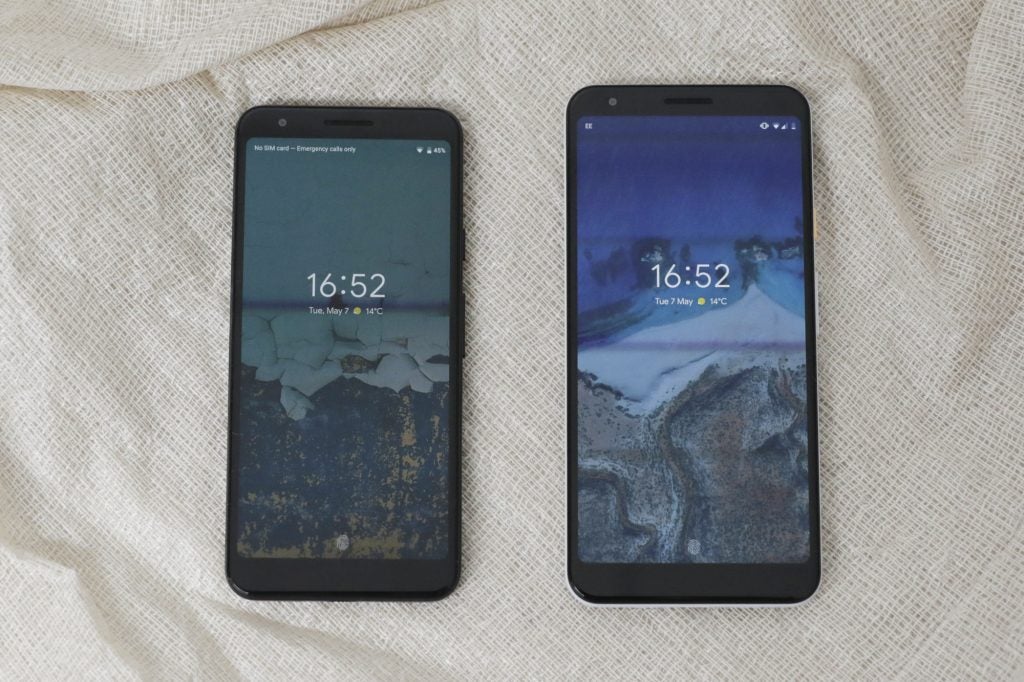 In almost every standard task and in general usage, you’ll see nary a skipped frame or slow-down; these phones perform perfectly well and comparably efficiently, tripping up in the same area: gaming. It’s the one aspect of the 3a/3a XL experience that highlights that these phones aren’t running on top-tier silicon but beyond that, they’re solid choices in most other disciplines.

Google Pixel 3a vs Pixel 3a XL: Same camera as each other and the Pixel 3 line

Both also ditch the double front camera sensors of the standard Pixel 3 pair and in the case of the Pixel 3a XL, there’s no notch to speak of either. On the back, lies the Sony IMX363-based 12.2-megapixel primary sensor, which paired to Google’s image processing smarts makes for a surprisingly capable mid-range camera experience, nearly on-par with its flagship companions. 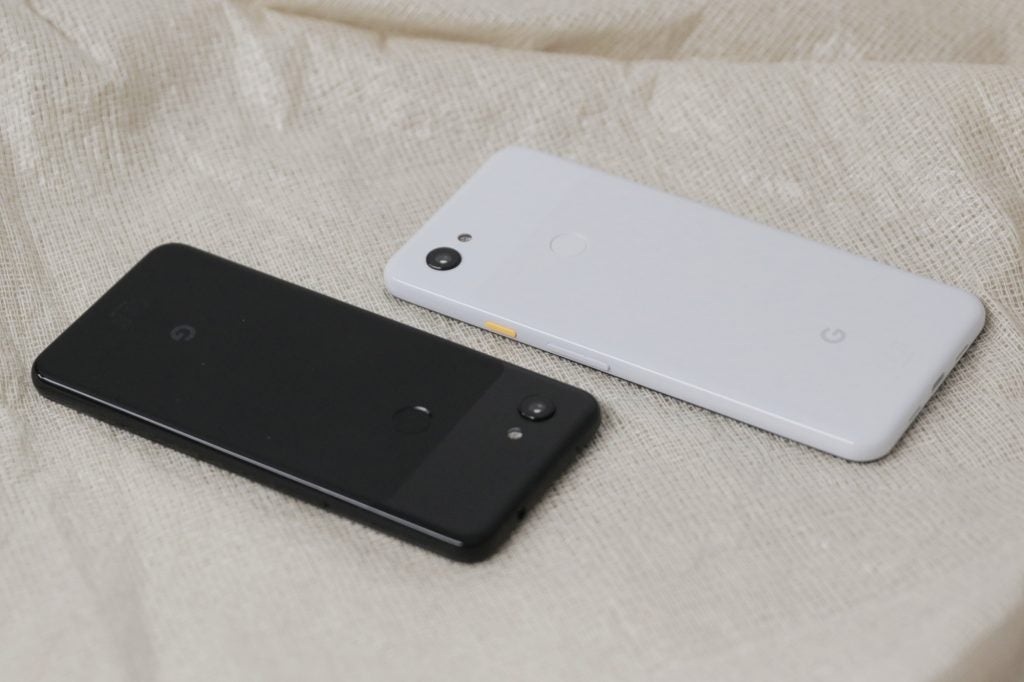 Neither phone retains the Pixel 3’s Visual Core smarts, so you’ll get slightly diminished image processing capabilities and weaker Google Lens integration. These, are at least, lesser features, meaning the most important functionality is still present and correct across both phones.

Google Pixel 3a vs Pixel 3a XL: Price and Availability

Both the Pixel 3a and Pixel 3a XL were launched in tandem at Google I/O 2019. Unlike the Pixel 3 series, there’s only one storage SKU to choose from across both devices: 64GB. This also means that both phones only come with one price tag. The Pixel 3a costs £399/$399, while the Pixel 3a XL costs £469/$469. Both phones also come in the same three colours: Just Black, Clearly White and the new Purple-ish.

Related: Google Pixel 3a vs Pixel 3