Google Lens has been one of the few compelling reasons to use AR on your phone – and now it’s about to get supercharged with three cool new features, which have just been announced at Google I/O 2019 conference.

After crowing about the fact that Google Lens has been used an admittedly impressive billion times, Google announced the three upgrades that are coming to the camera tech from “later this month”. 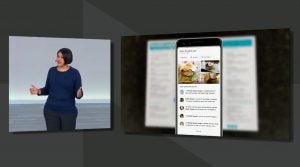 One of the best Google Lens features is translating menus when you’re abroad – well, now it’ll even highlight what’s most popular on the menu, as well as showing you real-world photos of what it looks like using photos and reviews from Google Maps. No more main ratatouille regrets or carbonara calamities, in theory at least.

Polished off your main and dessert? Point Google Lens at the receipt and it’ll also work out what tip you should leave and automatically split the total, which should replace the last known use for yours Maths GSCE.

The second big feature is all about bringing video to print books and magazines – for example, bringing ‘how to’ videos to recipe books. This one feels like it’ll be a bit more dependent on content partners – Google says it’s been working with museums and magazine publishers, but it’s a feature that’s long been mooted without ever really being compelling in reality.

Probably the most exciting feature on a practical level, then, is the translation help that Google will be bringing to Google Go, the search app in its entry-level phones. To help those with reading difficulties, or anyone struggling with a foreign language, a new Lens feature will soon be able to read signs out loud in several different languages, while highlighting each word in the camera app.

The coolest part of this new feature – which Google showed being used by a mother in India to read your child’s school report – is that uses on-device machine learning, with Google impressively compressing it to 100Kb. It’ll work on phones that cost around $35, meaning Google Lens is now a universal tech treat rather than one reserved for high-end phones in posh restaurants.