Google is lifting the lid on the latest features that are heading to its family of products, including Android Auto, Android P, Android TV, Chrome OS, Daydream, Google Assistant, Google Home and more, at its annual I/O Developer Conference. Here’s what you need to know about all of the announcements.

Google I/O 2018 Latest News – What did Google announce during its I/O Keynote?

Below is a summary of the biggest reveals Google made at its I/O keynote on May 8.

Google used its I/O Keynote as an opportunity to detail a number of features baked into Android P, including Adaptive Applications, Adaptive Battery and Adaptive Brightness – three useful new tools that take advantage of artificial intelligence (AI) to alter system functions when the algorithm sees fit. Here’s the low-down:

But we still don’t know what it will be called… Google Assistant has been treated to a huge overhaul. There are six new voices to choose from, as well as a revised user interface that will be available on both Android and iOS when it launches later in 2018. It’s a lot smoother than the existing interface, putting AI at the centre of the experience.

But that isn’t the best bit. Google Assistant will soon (no word on when) be able to make calls for you. And no, we aren’t kidding.

Google showed a demonstration of Assistant calling a hair salon to book an appointment during its I/O Keynote. Assistant had a back-and-forth conversation with the receptionist, speaking like a human; it processed questions on the spot and offered up intelligent and unnervingly normal-sounding responses within a matter of seconds.

The firm will also use the feature to update business listings in Search.

If you aren’t convinced the opening hours for an establishment listed on Google Maps is correct, for example, you’ll have the option to command the company’s in-house Assistant to contact the business to verify the information. It will then update the listing accordingly for the whole world to see. Crazy stuff, right?

Last, but not least, Google is arming Assistant with the facility to have a natural back-and-forth conversation. The feature will arrive in the coming weeks, providing you with the option to request additional information after you’ve submitted a request. You’ll also be able to ask more than one question at once. 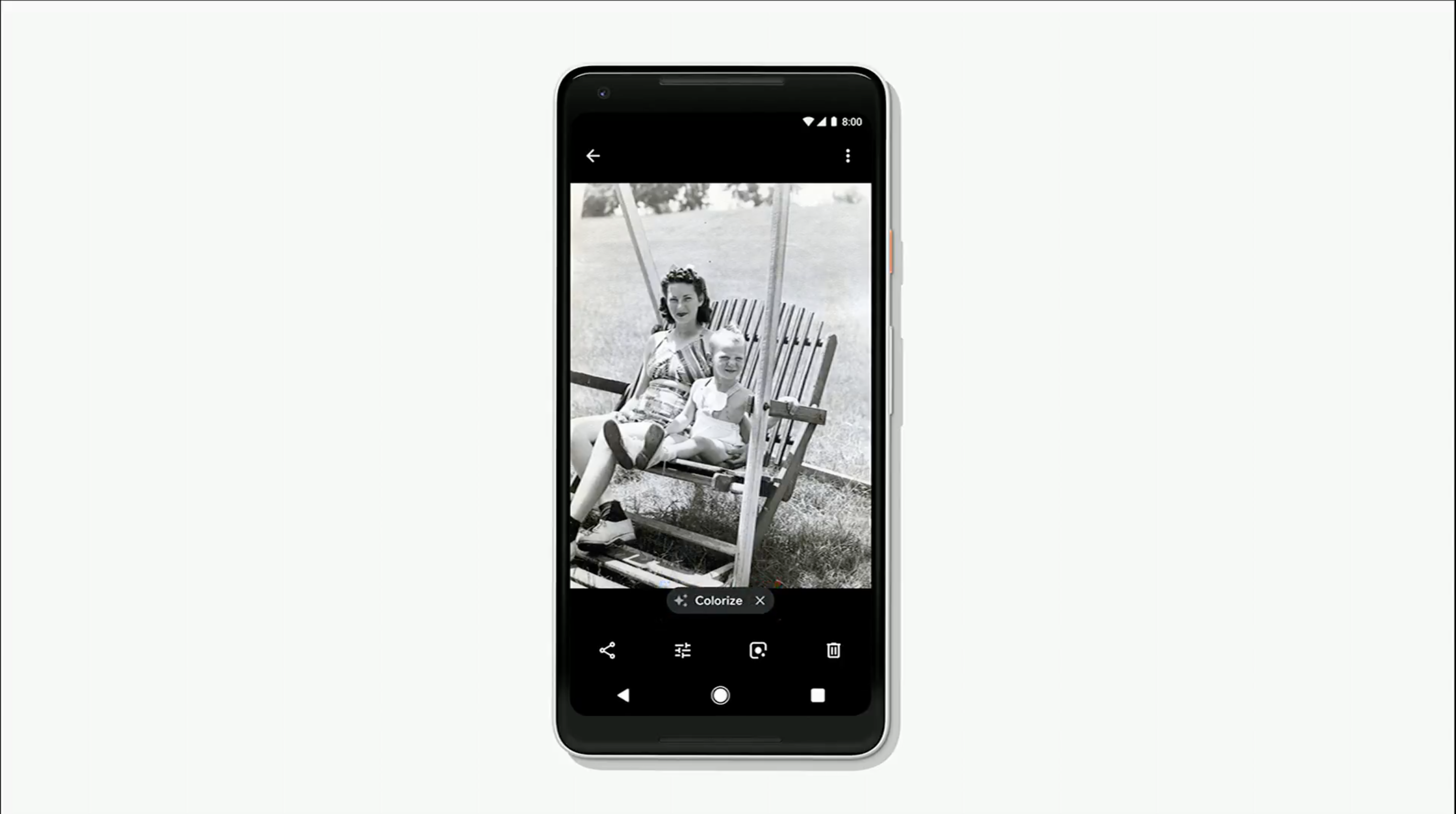 Google announced that a slew of new features are headed to Google Photos at I/O 2018, the most notable of which is the option to add realistic-looking colour, using AI, to black-and-white pictures. There’s also a new Smart Actions tool that can determine who’s in an image, offering to share it with those people.

Oh, and it will soon be able to recognise documents and convert them to PDFs, and let you know when it thinks an image needs to be brightened or rotated in order to make it look better. 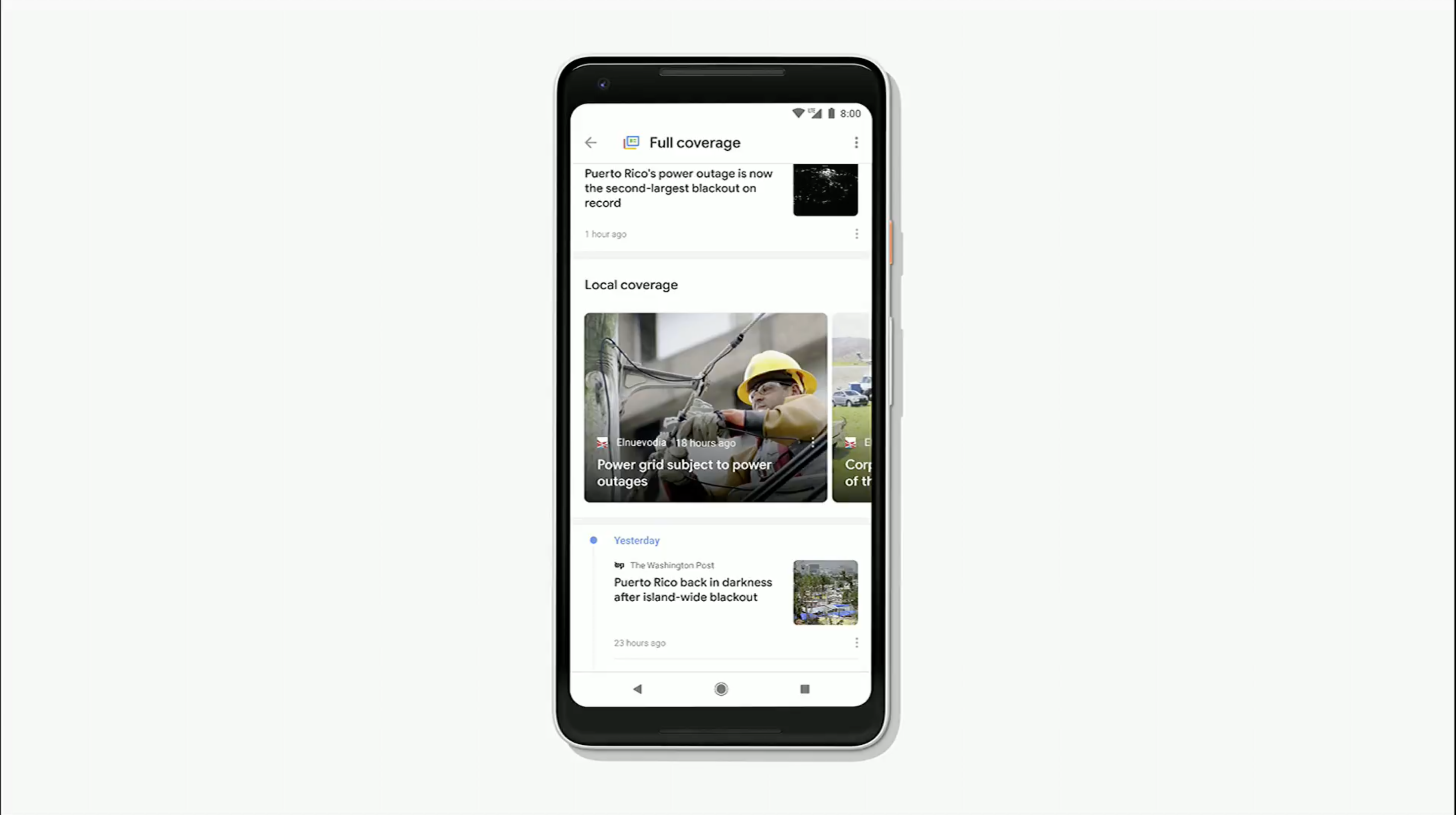 A new version of Google News was showcased during Google’s I/O Keynote. It’s designed to merge the client’s core features with the best of the standalone Newsstand application, while at the same time placing emphasis on images and YouTube videos.

The biggest change, however, is that News is now driven by AI. AI that intends to weed out fake news and understand you better.

Google says it uses artificial intelligence to not only surface stories you’re interested in, but to ensure you only see relevant and high-quality content. That’s further reinforced by the introduction of Snapchat Stories-style Newscasts, which you can swipe through for key snippets before you actually open an article.

Google I/O is the name of Google’s annual Developer Conference, where the firm discusses the future of the various products and services in its ecosystem. This year, it’s being held at the Shoreline Amphitheatre in Mountain View, California, but it’s also live-streamed for loyal fans around the world to tune in and watch.

Google I/O will run from May 8 through May 10 and, as you’d expect, the tech giant has plenty planned for the gathering. This is the reason it’s released an application for both Android and iOS that’s filled to the brim with must-know information, as well as a schedule for the event – so you can see what’s happening at any given moment.

Here are some of the highlights:

As mentioned earlier, the major events scheduled to take place at Google I/O 2018 will be live-streamed for the world to see. The streams will be hosted in three places: on Google’s dedicated Google I/O website; within the standalone Google I/O Android and iOS applications; and over on YouTube.