Google is rolling out scheduled routines for its Home speaker range, making it easier for users in the US to pick specific times for grouped commands to be carried out.

The rollout offers an upgrade to the routines feature, which rolled out earlier this year. Instead of having to shout out commands one at a time, it enabled users to pull together a series of actions (turn off lights, lock doors, lower thermostat, etc.) under a single voice command.

However, the new update enables users to schedule these routines at a time and date of their choosing. Once the schedule is set up within the Home app, users don’t have to use a voice command in order to enact it.

From there the Home speaker will issue an audio message when it is carrying out the the scheduled action, while users will also be notified on their phone. 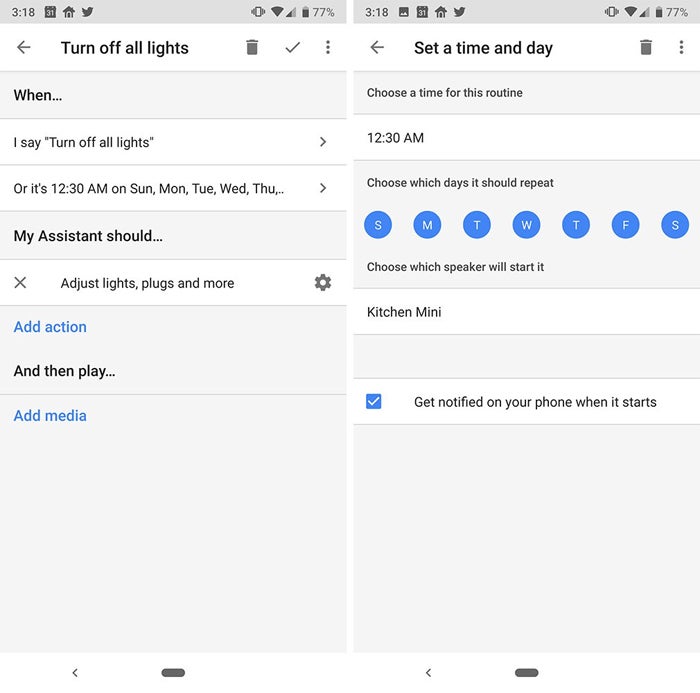 The same routine will still be carried if the user issues the corresponding voice command beforehand, of course. However, the new feature could prove handy if you leave the house in the morning without remembering to enact the routine, or pass out on the couch watching Netflix at night.

In order to enable the feature, go to the Google Home app, hit Settings, Routines and tap the + button. From there you’ll see the “Set a day and time (optional)” option within the app.

The feature (first discovered by a Reddit poster) is rolling out in the US from today, but it doesn’t appear to be available to UK Google Home users yet. We’ll keep you posted when it hits these shores.

Is Google Home winning the battle with the Amazon Alexa assistant in terms of smart functionality? Drop us a line @TrustedReviews on Twitter.