Google has been fined a record €2.42 billion for contravening the EU’s antitrust law, following a seven-year investigation into the company by the European Union.

It’s the largest fine issued by the European Commission for an antitrust law violation, with the Commission stating Google had “abused its dominant position by systematically favouring” its own Shopping price comparison service.

Google Shopping appears at the top of Google search results and compares prices from various retailers. The company described the service in a statement:

“When you shop online, you want to find the products you’re looking for quickly and easily. And advertisers want to promote those same products. That’s why Google shows shopping ads”

But the EU, which targeted Google Shopping as part of a general investigation into the company’s search algorithms, states Google damaged price comparison sites by showing Shopping results “irrespective of [their] merits.”

As a result of the judgement, Google will now be forced to “comply with the simple principle of giving equal treatment to rival comparison shopping services and its own service.” 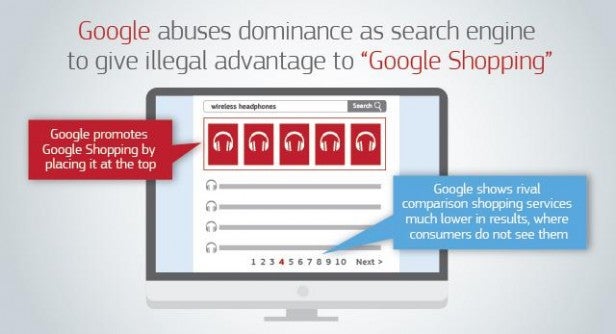 A slide from the EU Commission’s press release

That will likely mean major changes to the way the company’s search algorithms work in Europe, with the EU threatening daily penalties of up to 5% of Google’s average daily turnover if the firm refuses to comply.

But Google has stated it “respectfully disagrees” with the ruling and will be considering an appeal as it reviews the decision.

The company added: “We believe the European Commission’s online shopping decision underestimates the value of those kinds of fast and easy connections.

“While some comparison shopping sites naturally want Google to show them more prominently, our data show that people usually prefer links that take them directly to the products they want, not to websites where they have to repeat their searches.

“…Given the evidence, we respectfully disagree with the conclusions announced today.”

However, EU competition commissioner Margrethe Vestager said in a statement, that while Google had introduced “many innovative products and services that have made a difference to our lives,” it had “abused its market dominance as a search engine by promoting its own comparison shopping service in its search results, and demoting those of competitors.”

She added: “What Google has done is illegal under EU antitrust rules. It denied other companies the chance to compete on the merits and to innovate. And most importantly, it denied European consumers a genuine choice of services and the full benefits of innovation.”

At this point then, it remains unclear whether European users will start noticing changes to the Google Shopping service, as the battle looks to be far from over.

Google is currently the subject of two other EU antitrust investigations focused on its AdSense business, and deals it makes with Android phone manufacturers.

Let us know what you make of the decision in the comments.