The Google Pixel launch event is now behind us, and the Google Pixel phone is finally official. Read on for all the info on Google Pixel, Google Assistant, Google Home, Google Daydream, Chromecast Ultra, and more. Or watch the video above for all the highlights in just three minutes.

Sundar Pichai, CEO of Google, kicked off proceedings with Google Assistant: “. If you step back and think about it, computing has always had big shifts every 10 years or so.” He added: “At Google, we are very excited about this shift.”

Google Assistant is Google’s virtual helper – it’s based on Google Now, but with the added ability to engage in two-way conversation. It’s a bit like Apple’s Siri, Microsoft’s Cortana or Amazon’s Alexa.

“We’ve invested in deep areas of computer science. Today, our knowledge graph has over 70 billion facts about people, places and things,” explained Pichai, describing the company’s progress with Google Assistant.

Pichai also revealed that the accuracy of Google’s machine learning systems had improved from 89.6% in 2014 to 93.9% today. The Google CEO also praised improvements to Google Translate and text-to-speech.

The biggest announcement from today’s event was the launch of the new Google Pixel and Pixel XL smartphones. They’re the first Google handsets to ditch the “Nexus” branding, and they were designed by Google. They’re also the first phones with Google Assistant built in.

Meanwhile, the Google Pixel XL boasts a larger 5.5-inch screen with a 1,440 x 2,560-pixel resolution, and a larger 3,450Ah battery. It also runs on Qualcomm’s Snapdragon 821 chip, and will charge up to 7 hours of its battery life in just 15 minutes – apparently.

Both handsets ship in 32GB or 128GB options, and feature an aluminium unibody and polished glass design. You can grab them in three different (and refreshingly named) colour options – Quite Black, Very Silver and Really Blue – with pre-orders starting today.

“,” said Rick Osterloh, Head of Hardware Group. “Building hardware and software together lets us take full advantage of capabilities like the Google Assistant. We’re building hardware with the Google Assistant at its core, so you can get things done, without worrying about the underlying technology. Hardware isn’t a new area for Google, but now we’re taking steps to showcase the very best of Google.” 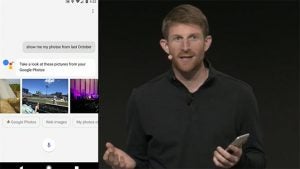 “This phone was designed inside out to be simple and smart,” said Brian Rakowski, from the Pixel product team. “Pixel is the first phone with the Google Assistant built in.”

Rakowski talked up the Pixel’s camera, lauding its 12.3-megapixel primary shooter, which features an f/2.0 aperture, HDR+ technology, and a pixel size of 1.55 microns. According to Google, DxOMark has already given the Pixel’s camera a score of 89/100, which trumps both the iPhone 7 (86) and last year’s Nexus 6P (84). He also added: “Our camera has a shorter capture time than any smartphone camera we’ve tested.”

Both handsets come equipped with Google’s new Android 7.0 Nougat software, as well as the expected fingerprint scanner and USB-C port. Other new features include background downloading and installing for software updates, and 24/7 live customer support (over phone or chat) built into the phone – with a handy screenshare option, too.

The Google Pixel starts from $649 in the US. Here’s the UK pricing:

You can pre-order today, and they’ll be available in-store on October 20.

Hark, denizens of the future! New info on Google’s elusive Daydream VR ecosystem has arrived, including the announcement of Daydream View, a custom-built virtual reality headset built by Google. Speaking at today’s event, Google’s VR chief, Clay Bavor, said: “Daydream ties together a bunch of things that you need for great VR.” 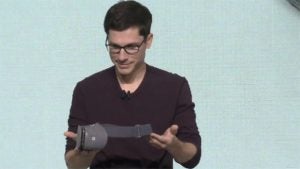 “It doesn’t quite look like other VR headsets. We looked at what people actually wear,” explained Bavor, who added that alternative materials such as microfibre make it “soft, cosy, and feels great to wear.” He also said that it’s 30% lighter than similar devices – that’s probably a dig at Samsung’s Gear VR. It comes in a Slate colour option, but Crimson and Snow will also be added later this year.

Daydream was actually first announced back at I/O earlier this year. It’s a virtual reality platform that shows Google is getting serious about VR. However, it’s made up of a few different components, which means it’s all a little confusing.

On the software side, , and basically works as an alternative to Oculus Home. You’ll be able to browse apps and run VR content, all with the support of Google. Over 50 apps and partners will be bringing content to Daydream before the end of the year, as revealed at today’s event. Daydream will also support VR modes of YouTube, Google Photos, and Google Street View – there are 150 curated tours of places around the world, such as the Taj Mahal

There’s also a hardware reference design that consists of a headset and motion-sensitive remote, both of which can be nabbed by third-party manufacturers. But Google is also building its own version of these to sell to consumers.

Finally, Google has also confirmed that not all phones will be Daydream-ready – but that the new Pixel and Pixel XL will be. Daydream-ready phones will need to have suitably powerful chips (like the Snapdragon 821), as well as high-density displays. Eight hardware partners have already been confirmed for Daydream: Samsung, HTC, LG, Xiaomi, Huawei, ZTE, Asus, and Alcatel.

Daydream View and the controller go on sale together for £69/$79 in early November. UK customers will be able to grab one from Google, EE, or Carphone Warehouse.

Google also threw us a curveball with the Google Wi-Fi Router, which debuted at today’s event. It’s poised as a companion device for Google Home, and is small and inconspicuous – about the size of an Amazon Echo Dot. It’s an expandable system, which means you’ll stick a bunch of the Google Wi-Fi routers around your home. 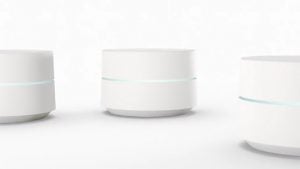 There’s also a network assist feature that will actively ensure you’re on the right Wi-Fi channels to optimise downlink performance. It will be available for pre-orders in November, and will ship in early December. It’s $129 for a single-pack, but there’s a 3-pack for $299, which would suit larger homes. But there’s no UK release yet, unfortunately.

Google also announced a new 4K-ready Chromecast, which is the first of the series to support Ultra HD video. It’s called Chromecast Ultra. 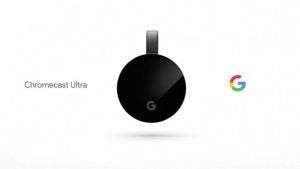 Previous Chromecast devices used Marvell chips based on ARM architecture, specifically the Armada 1500 Mini and Armada 1500 Mini Plus. What’s interesting is that Marvell has another two chips that are more powerful than the ones used in Chromecast so far – the 1500 Pro4K and the 1500 Ultra. Both of these support UHD video, and are likely candidates to appear in the Chromecast 3/Chromecast 4K.

Chromecast is 1.8x faster to load content, supports HDR, and Dolby Vision too. It will be available in November for £69/$69 – in the UK, try Google, Currys PC World, and Argos. Google Play Movies will be rolling out 4K movies and TV shows in November, too. 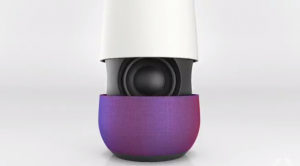 It’s basically a small, minimalist cylinder with an angled top. The bottom part of the casing is modular, and can be swapped out for other shells of varying colours. And the top portion is white, with four LED lights built into the slanted surface that will tell you when Google Home is turned on. The top surface is capacitive, and features a microphone that utilises machine learning to separate speech from noise. And the speaker is boasts a full-size excursion driver, plus two passive radiators.

Overall, it looks very pretty, and would look just fine as an ornament sitting on a side-table, cabinet, or mantlepiece. That’s good news, as Google wants you to have several of these dotted around your home à la Sonos.

Today, Google confirmed that Home would be offer support for Nest, Samsung SmartThings, Philips Hue, and IFTTT. It will also allow you to control your Chromecast with your voice – huzzah! Netflix support is also coming, so you’ll be able to tell Home to play Stranger Things, and it will start streaming on your TV. Just make sure to shout at Philips Hue to turn down the lights first…

Sonos will also be upset to learn that Google Home will work in sync like a multi-room speaker system, so you can play multiple songs in different rooms. There’s also intelligent responding, so if you ask a question and have multiple Home speakers, only one device – the one that hears you best – will respond. 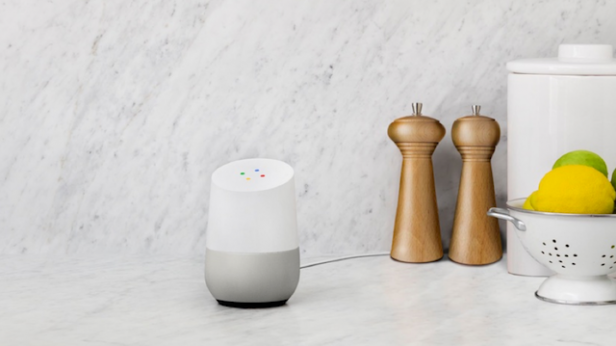 Google Home will be available for pre-order in the US starting today, and will ship on November 4. It costs $129, and comes with a free six-month trial of YouTube Red. There are six modular cases: Mango, Marine, and Violet fabric cases, and Carbon, Snow, and Copper metal cases.

Which new Google product are you most excited about? Let us know in the comments.