A Google Chromecast UK launch could be just a matter of days away as latest leaks suggest British retailers are starting to receive stocks of the TV dongle.

Connected via a HDMI port, the Chromecast is capable of giving your none-connected TV smart credentials, allowing users stream a range of content direct to the biggest screen in the home.

Having previously been tipped to be heading for a March 1 UK release, a launch which failed to materialise, it is now expected the dongle will launch within days. The Chromecast has been available in the US since the latter half of last year.

With Currys and PC World having previously been tipped to be a UK launch partner for the Chromecast in the UK, one of the chain’s employees has now Tweeted an image of Chromecast stocks ready to go onto the shop floor.

“Looks like Google Chromecast will be available to buy in UK stores very soon!” the employee, going under the Twitter handle @Rage06, stated alongside the image of Chromecast stocks.

Earlier this week Google’s own Android Chief Sundar Pichai teased an upcoming Chromecast UK launch, stating that the device will land in “many more countries” before the end of the month.

Running a simplified version of Android, Chromecast allows users to stream content from the likes of Netflix, and YouTube with content also able to be purchased through the Google Play Movies store.

On top of this, the dongle allows you to play your Google All Access Music content stored on your smartphones and tablets through your TV’s speakers. 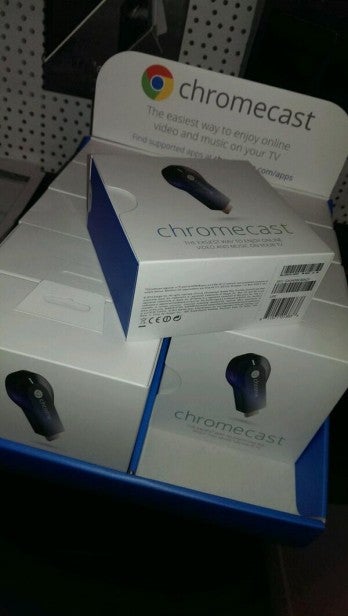