Google has already told us to expect a new Chromecast product at its September 30 event and now we have have our best look yet.

Images showing the HDMI dongle and the rumoured new remote control have emerged online a mere 12 days before Google takes the virtual stage.

The new remote control images, which were published by WinFuture (via 9to5Google), has dedicated YouTube and Netflix buttons, as well as Assistant, home, and mute buttons. There’s a directional-pad, and a volume rocker at the side too. It doesn’t look as if the customisable star button that appeared in previous leaks has made the cut though.

The dongle looks like the rumoured ‘Sabrina’ dongle that boosts the Chromecast offering beyond a device that simply streams content from a companion device.

It is thought this next-generation dongle is going to be running the Android TV interface. This will make it more of a contender to the Amazon Fire Stick, Roku Stick and the Apple TV set top box. It’s also thought the Sabrina dongle will have a 4K HDR max resolution, as well as the new look user interface we’ve seen in recent video leaks. 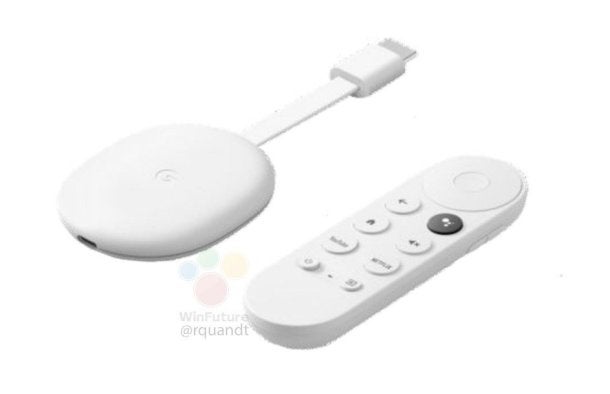 Google will announce the product at a virtual event on September 30, where the star of the show will be the new Pixel 5 phone, as well as a 5G version of the Pixel 4a.

Google has already confirmed the Pixel 5, which is likely to be the first handset to run Android 11 out of the box, and now it’ll be unveiled at a virtual event at 11am PT on Wednesday September 30, which is a rather unhelpful 7pm UK time.

Google has also promised to launch a new Nest smart speaker and, back in July, Google shared an official photo and a video. The clip shows the speaker detached from the base and placed on a table for playback via a built-in battery pack.

“We invite you to learn all about our new Chromecast, our latest smart speaker, and our new Pixel phones,” reads an invite send out to the media.