The leak was first teased by industry insider Shinobi on Twitter, before website Nerdleaks posted the information. The website has since been taken down, but NeoGAF users managed to grab all the images before the closure. The images were apprently taken from a former Sony Santa Monica employee’s website.

The images show many of the basic assets and concepts for the rumoured forthcoming game, as well as a slightly blurry image of Kratos sporting a beard and wielding an axe in his right hand. The axe is apparently primarily used for traversal, cutting vines and creating new paths. 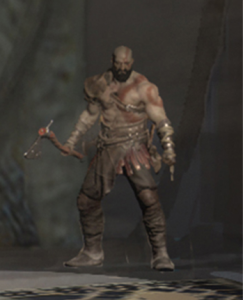 Multiple locations are also mentioned: Alfheim, “Land Of The Fairies”, one of the Nine Worlds and home of the Light Elves.

A new God of War game being in the works isn’t a revelation, but could we be set for an E3 2016 reveal at Sony’s press conference? We certainly hope so.

Are you excited for a new God of War? Let us know in the comments below.