Deck13’s The Surge was one of many titles in recent years that sought to reiterate the success of Dark Souls. The grimly futuristic action RPG took the melodic combat and freeform exploration of FromSoftware’s efforts and made it feel surprisingly fresh and unique.

An inventive equipment system and a large of variety of deadly robotic enemies made it a worthy companion to Dark Souls amongst other imitators that simply couldn’t make the cut. Now, a sequel is in the works for release in 2019. Here’s hoping lightning can strike twice!

Trusted Reviews has compiled everything you need to know about The Surge 2 including all the latest news, release date, gameplay, trailers and our hands-on preview.

The Surge 2 trailer – How does it look?

Deck 13 Studios revealed just under a minute of gameplay footage for The Surge 2 thus. Check it out below:

The Surge 2 Gameplay Preview – What do we think?

Technology is bad news. If The Terminator was accurate about one thing – and that definitely wasn’t time travel – it’s that robots will eventually surpass our own intelligence and take over the world. Deck 13’s The Surge provided a compelling vision of that idea back in 2017, albeit with a helping hand from the formula made commonplace by Dark Souls.

The fiercely challenging action RPG had you playing as a generic everyman who found himself at the mercy of an evil corporation, eventually having no choice but to fight his way out of a world filled with mechanical nightmares. It was mostly good, but oftentimes held back by its generic visual palette and uneven difficulty. There was room for improvement, with a few subtle nip and tucks holding it back from greatness.

Set to release later this year, The Surge 2 presents an opportunity for Deck 13 to establish this sci-fi franchise as something truly special, cementing it as far more than a competent copycat. Having spent a chunk of time with the game, it feels like it’s taking some healthy steps in the right direction, even if some elements feel much too familiar. 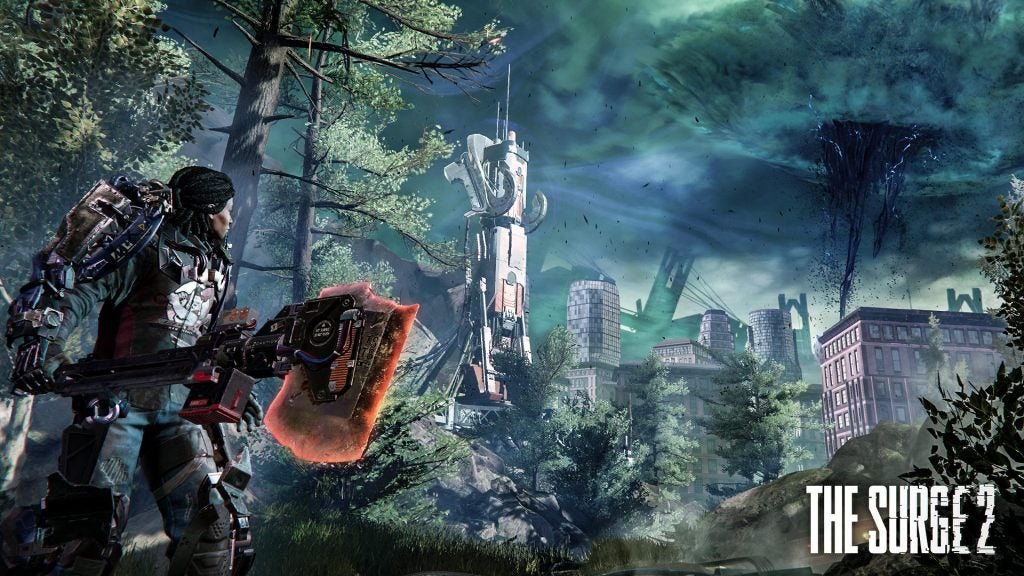 The Surge 2 takes us to Jericho City, a futuristic metropolis that has fallen victim to a strange robotic virus. It has infected machinery, turning it into bloodthirsty hostiles while unusual humanoid enemies roam the map in search of prey. I was dropped right into the thick of it – and, to be perfectly honest, I didn’t make it very far. It’s hard, punishingly so.

After stepping out of the first Medic Bay, I’m ambushed by a pair of enemies. One wields a gun, firing at me from a distance, while his companion rushes forward, slashing wildly as my health dwindles. I try to find my footing but I’m killed within seconds, sent back to where I started like a startled puppy. I’m down, but not out, and clumsily make my way back to the battlefield.

This time I feel more prepared, now aware of the fact that certain limbs are sensitive. The Surge 2’s defining feature is a targeting system that allows you to target specific body parts across both humans and machines. Do enough damage to the right dangly bit and it’s time to perform a wonderfully gruesome execution. Expect flying limbs, heads and other things that aren’t supposed to be chopped off.

Weapons range from light, medium to heavy, with the latter being capable of destroying body parts of bosses, unveiling weak points you’ll definitely want to clobber. My character’s movement reflected their loadout, movement slowing to a snail’s pace whenever I opted to carry a giant mechanical hammer on my shoulder. On the flipside, a slender spear gives you the agile form of a futuristic ninja.

Before taking advantage of The Surge 2’s limb-targeting I was frequently flummoxed, my health battered down within seconds by foes that proved far too smart for me. However, upon learning their weakness, I systemically ran circles around them, taking sly strikes before slowly emerging victorious. When this works, it’s excellent – but there remain some rough edges for Deck 13 to smooth out. 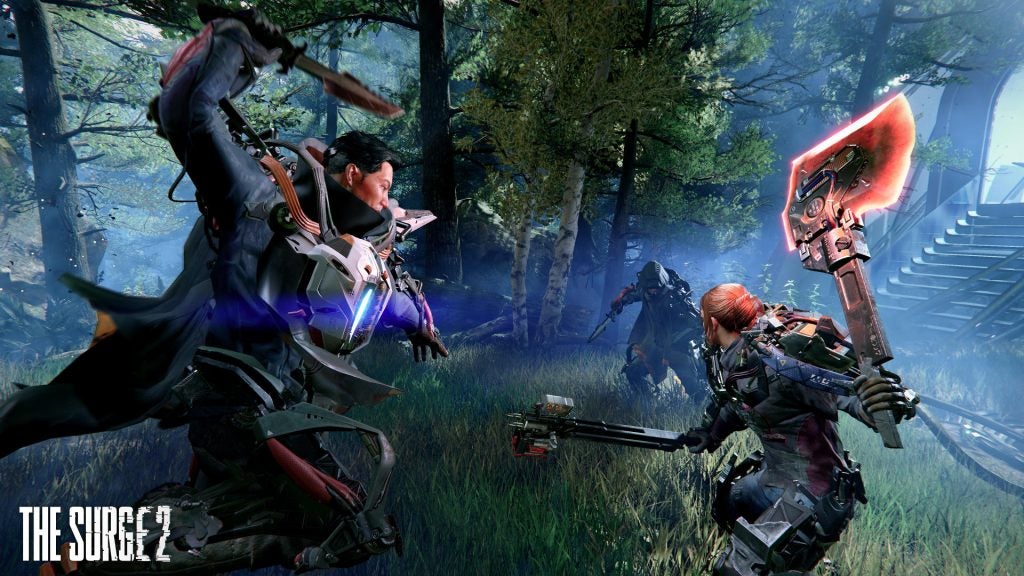 The lock-on system feels unreliable, often focusing on someone several metres away instead of the threat right before you. Considering how fast The Surge 2’s combat is, a mistake such as this can mean certain death. I had this bother me several times throughout the demo, although it appears to be something that could easily be refined before release. Sadly, the environmental design isn’t so malleable.

Upon starting the demo, I stepped out into a wild jungle area filled with lush fauna and invisible threats skulking about the grass. It’s immediately striking, the small pockets of industrialism throughout reminding you that the technological threat is always on your heels. But it all feels very cramped; my surroundings seldom felt large enough to engage multiple foes at once. It becomes tedious as you’re backed into walls, fighting a losing battle with the camera.

While I couldn’t play it, during a presentation I was shown vast locales across Jericho City, all of which had been overtaken by a robotic threat. There’s clearly a lot of variety being held back, and I can’t wait to see all of it. At the end of its life, the original game saw you gallivanting through theme parks, the Wild West and a load of other wacky locations that weren’t afraid to poke fun at themselves. It just worked, and The Surge 2 should learn from it.

Despite its initial claustrophobia, The Surge 2’s environments are designed with exploration at the forefront. Most major areas split off into multiple directions for you to explore, some hiding secret avenues of progression that you might miss completely without some intuition.

I was told this was deliberate, providing players with a number of goals to pursue, preventing them from becoming disheartened by a particularly difficult boss. They can always step back and address something else before facing their demons. 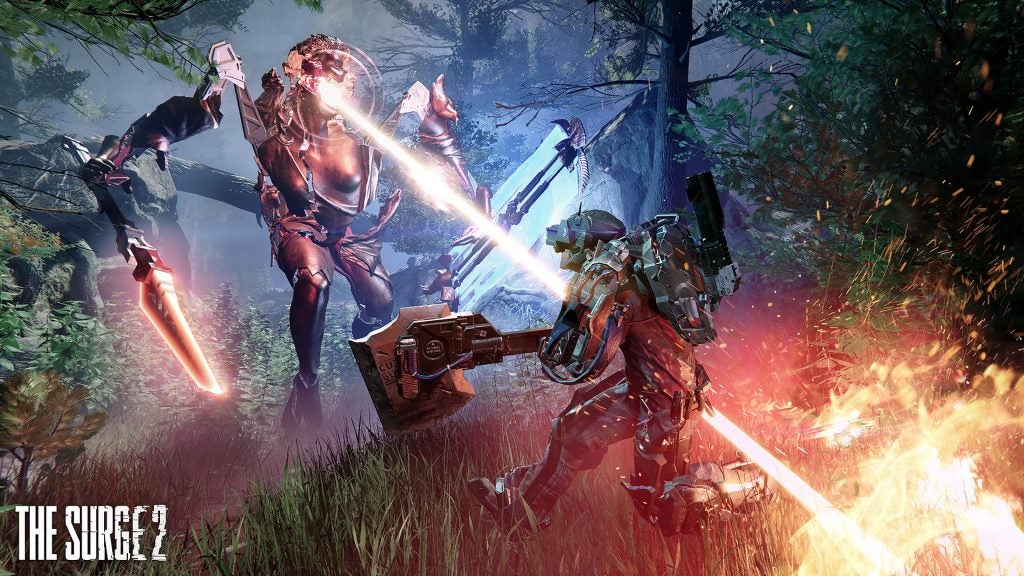 I was taken aback by how familiar The Surge 2 is when compared to its predecessor. UI elements made me feel right at home as I delved into crafting menus to produce new components, while equipment is once again managed through individual limb upgrades and secondary gadgets. It’s intuitive, making me fully aware of the powers I had at my disposal.

Luckily, it isn’t all exactly the same, with combat having undergone some tactile changes that shake things up for the better. Blocking attacks is no longer a sterile effort, as you can now move your weapon in different directions to deflect enemy attacks. Succeed and you’ll leave them vulnerable to deal some essential damage. It’s a cool system, translating across all adversaries, both small and large.

Right now, it doesn’t have the magnificent grace of Sekiro’s posture system, but builds upon an already robust experience to create something that requires an extra layer of strategy. If it isn’t your thing, you can easily get through using other means. The Surge 2 is appreciably open when it comes to players finding a playstyle that works for them, without compromising on the challenge that makes it so satisfying to conquer.

As a big fan of the first game, The Surge 2 makes some welcome improvements to the formula, while introducing a slew of neat experimental features.

The setting of Jericho City intrigues while diversifying the muted aesthetic of the original, although I’m concerned about the narrow design of some battle areas.

But, after spending an hour or so with The Surge 2, it’s a worthwhile evolution of what came before it, pushing forward the genre that FromSoftware helped create in some exciting ways.

The Surge 2 release date – when is it coming out?

The Surge 2 is currently in development for PS4, Xbox One and PC with plans to release for all three platforms in 2019.

The Surge 2 Setting – Where does it take place?

Confirmed during the official announcement, The Surge 2 will take players to an all-new environment following the events of the first installment.

The setting itself is a sprawling, devastated city with ambitious level design made possible by the developer’s new and improved gameplay engine. It sounds like it’s leaning into the post-apocalyptic vibe which we’re totally down for.

Did you play The Surge back when it released? Enjoy it? Let us know your thoughts on Facebook and Twitter @trustedreviews.