Sekiro: Shadows Die Twice is the new game by FromSoftware, the creators of Bloodborne, Dark Souls and Armoured Core. The Japanese Studio is beloved across the globe nowadays, so there’s plenty of anticipation for Sekiro.

Published by Activision, Sekiro: Shadows Die Twice is an action RPG with the quick and precise combat you’d expect FromSoftware to produce. However, this tale seems to focus on a far deeper narrative across an archaic Japanese setting. Either way, it’s shaping up nicely.

Read on for everything you need to know about Sekiro: Shadows Die Twice including the release date, latest news, and our hands-on gameplay preview.

Coverage by Game Informer has led to a bunch of details slipping out for Sekiro: Shadows Die Twice in recent examples. For example, FromSoftware has confirmed that it will have a voiced protagonist, a first for the Soulsborne line of titles:

“Having this key protagonist allows us to build a cast of characters around him, and his personality, and his history. We feel like, you know, not the typical NPCs that you run into during the game, but these kind of central – these core characters that are central to his presence in the world, and his story – are going to be playing a lot of that role of the story in the gameplay. So, we feel like you’ll be able to experience both his past, in that sense, and the here-and-now of where the game takes place.”

We imagine he won’t be complete chatterbox as you explore the world of Sekiro, pouring out monologues left and right. Instead, the presence of a spoken hero seems to be a tool for complimenting the world and story around him. In addition, Sekiro: Shadows Die Twice will have no online multiplayer, meaning you’ll even be able to pause the game!

FromSoftware’s latest effort challenges almost everything I’ve come to know about Bloodborne and Dark Souls, twisting my perspective into one that forced me to think and fight differently than before.

Yet it still possesses the same DNA, bearing a heavy, precise combat system and a wonderful sense of exploration across a mythical depiction of Japan. Having spent 30 minutes with Sekiro: Shadows Die Twice, it may have already staked a claim as one of 2019’s finest action games.

Set in the closing years of Japan’s Sengoku period, you play as a mysterious ninja who has been resurrected and cast out on a mission of revenge. He’s silent, brooding and happily willing to murder all in his path.

And you do just that. My 30-minute demo began with me perched upon a tree branch, and a tutorial providing instructions on how to plunge my sword into the guard waiting below. After this, I was on my own. Much like the Soulsborne titles that came before, Sekiro is least interested in holding the player’s hand. 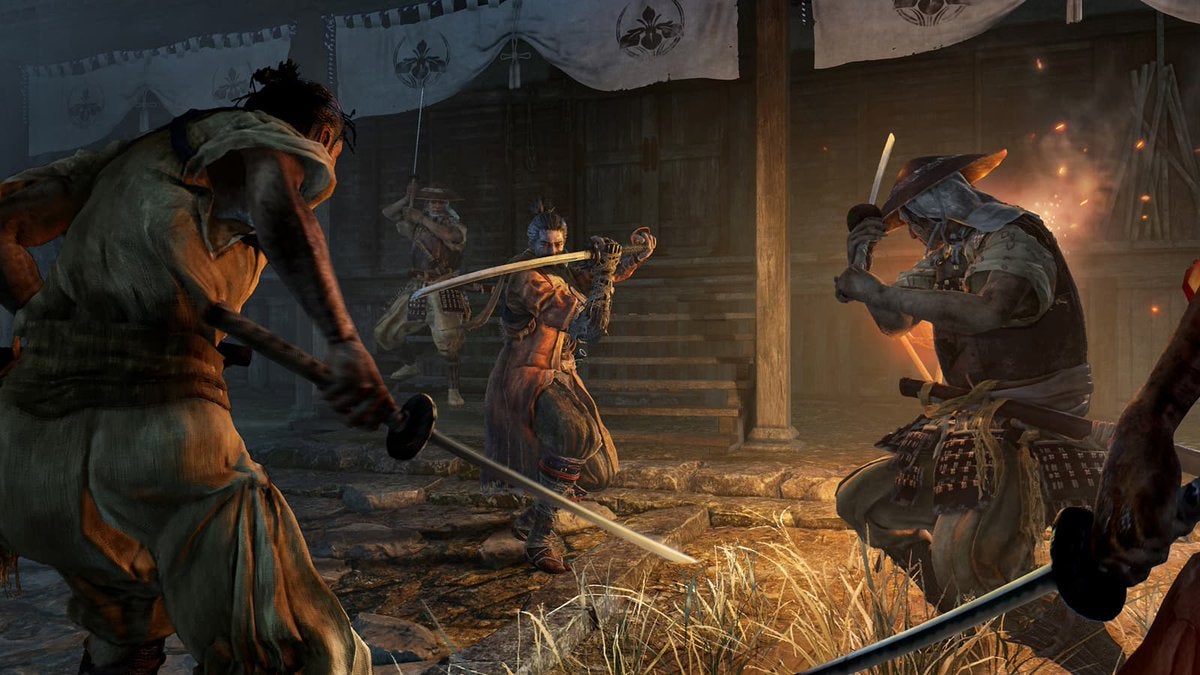 This unforgiving difficulty doesn’t mean you’re left without a means of defence, though. In fact, it’s quite the opposite. Our hero is equipped with a standard katana and a makeshift arm that doubles as a multitude of different tools.

It can be used as a grappling hook, which feels incorporated into every facet of Sekiro. Whether it’s a way to traverse rooftops, ambush enemies, discover secrets or, in larger battles, performing unique attacks awash with spectacle.

The best part? It feels incredible in action, having already justified itself as a central mechanic. One of my demo highlights was an encounter that saw me facing off against a looming demon locked up in wooden stocks. He packed a heavy punch, but I was able to use my grappling hook to pull him towards the ground, opening up avenues of attack previously unknown.

Sekiro spices up the combat model further by abandoning the stamina gauge and placing a greater focus on precision and accounting for enemy equipment. I didn’t stand a chance against an Armoured General as I had no idea of his weaknesses, leading to multiple deaths and avoiding him altogether.

I imagine that in the full experience you’ll slowly chip away at enemies until they’re nothing but a crimson stain on your blade. However, you’ll also need to contend with a stagger metre of sorts, which, once filled, opens up both you and the enemy for a devastating special attack. Not only do they look stylish, but they act as a sufficient reward in the act of attrition many fights evolve into. 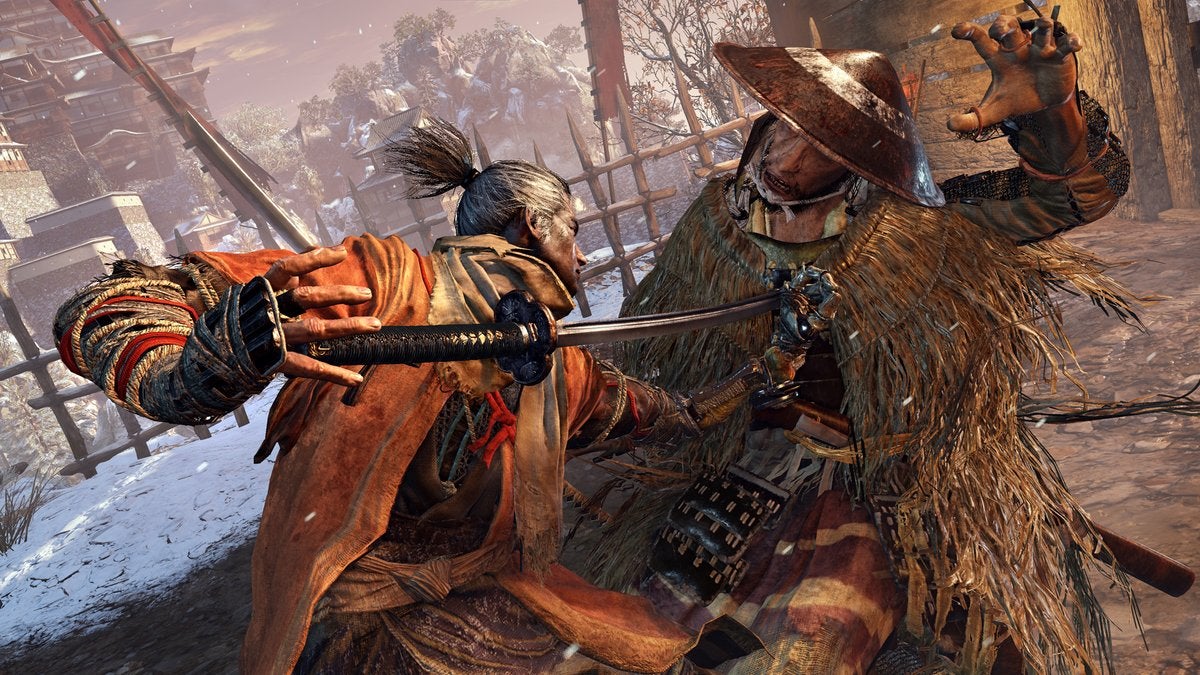 Your left arm can be customised with different secondary weapons, representing a heavy attack that, when used correctly, is perfect for leaving foes vulnerable. My favourite was a flamethrower that could leave enemies stumbling desperately to fan the flames, providing a few precious seconds to take a slash. There’s also the Loaded Axe, which can stun enemies with a swift slam, although it takes time to wind up.

Dark Souls and Bloodborne are renown of robbing you of everything you have upon death, forcing you to return to a resting place to receive well-earned spoils. Sekiro does away with this notion and even allows you to immediately resurrect upon defeat before facing death. This is a huge departure, giving you a few precious seconds to rethink a strategy before facing an enemy again.

Clashing swords is a focal point of Sekiro, since the majority of foes wield a saber of sorts ready to thrust at you. A rhythmic touch of the shoulder button initiates a parry, leaving enemies vulnerable to a devastating attack, or even a one-shot kill in some instances. FromSoftware has dabbled in this part of combat before, but never to such a detailed extent. How this will develop across the entire journey is very exciting. 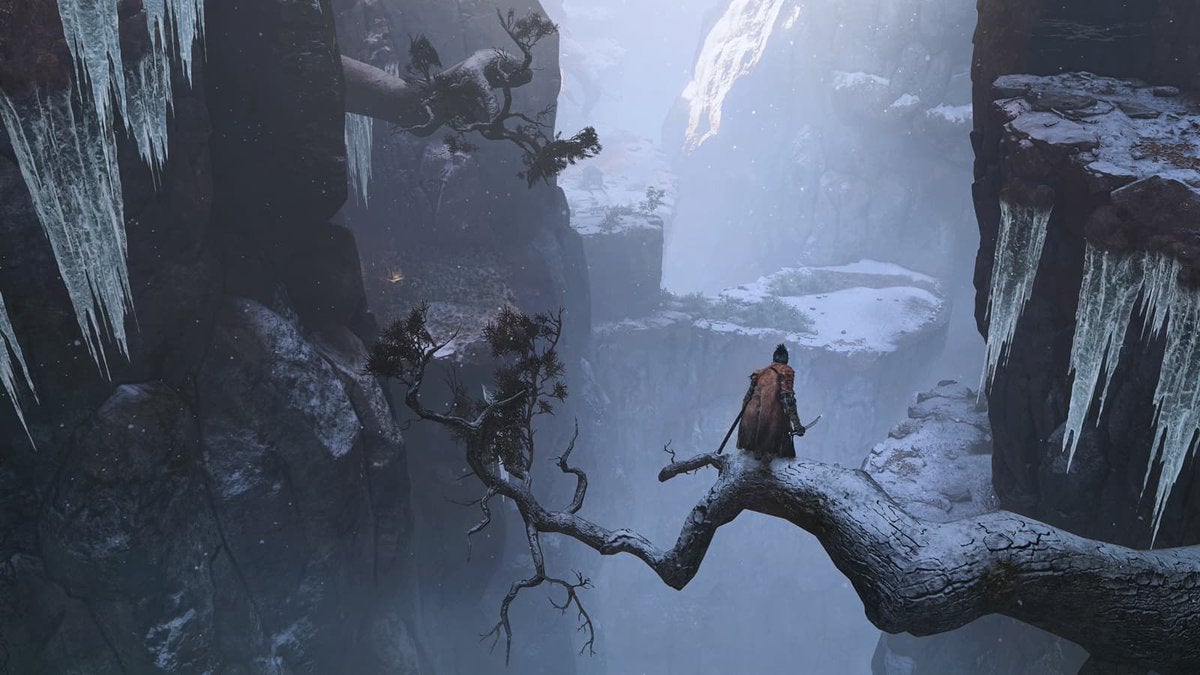 Sekiro: Shadows Die Twice has its fair share of breathtaking boss encounters, and I’ve already witnessed two of them. The first was a giant snake, the size of a skyscraper. Upon hearing a rumbling amidst the cliffs upon which I was perched, I knew something was wrong. After a few more seconds, the scaled creature lunged at me with fangs at the ready.

I managed to hide in a nearby cave, where I was shortly murdered by a headless troll – arguably a better way to go. The second was a corrupted monk, with three forms to contend with. I managed to conquer the first, but within seconds he’d filled the screen with mist, the monk attacking me in the form of a spooky spectre. Unfortunately, I died in seconds.

Encounters such as this feel like a dynamic part of Sekiro, which itself is an intricate painting of intertwining areas and a mixture of historical architecture and dark, mythical monsters. I adore it and hope the full game is just as good.

Sekiro: Shadows Die Twice is much more than another Dark Souls or Bloodborne.

FromSoftware has adapted the masterful combat system it has spent years refining and made it faster and more satisfying, with multiple elements that feel akin to a well-oiled machine. Everything just works, and I felt at home within minutes of picking up the controller.

Whether this will be a more a linear effort with a greater focus on narrative remains to be seen, but I’m intrigued to see how Sekiro aims to differ from the efforts that have come before it. For now, this is definitely one to watch.

What is Sekiro: Shadows Die Twice?

Sekiro: Shadows Die Twice is an action RPG starring a mysterious ninja with a prosthetic arm, a limb which will have mechanical importance in gameplay. For example, it can be used as a grappling hook or swung around to stun and distract incoming enemies. Combat is brutal, bloody and wonderfully satisfying, judging by the debut trailer.

Shadows Die Twice is directed by Hidetaka Miyazaki, the same mastermind behind classics such as Demon’s Souls, Dark Souls and Bloodborne. Fans worried that the beloved formula is being abandoned can rest easy knowing this. It’s also published by Activision, the company behind blockbusters like Destiny and Call of Duty. 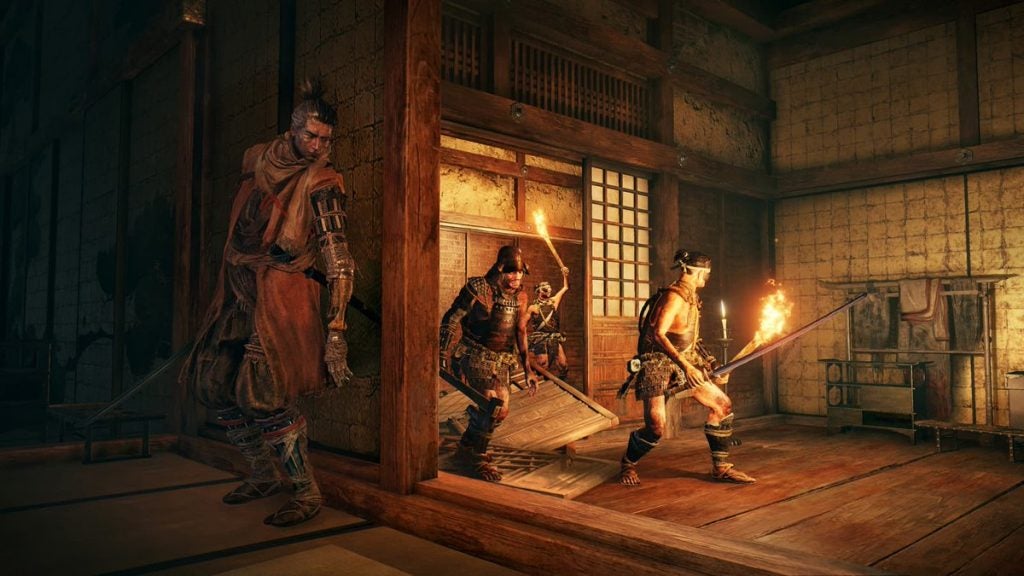 Sekiro: Shadows Die Twice is due to release for PS4, Xbox One and PC on March 22, 2019. It appears FromSoftware is eager to follow a similar release window to Bloodborne, and who are we to turn them down?

Does Sekiro: Shadows Die Twice look exciting to you? Let us know on Facebook and Twitter @trustedreviews.