The PS5 allows you to automatically capture a video clip when earning a trophy. It’s a cool idea, but also floods your storage space after only a short amount of time.

When reviewing the console, I turned the feature off during the first few levels of Astro’s Playroom since it was flooding my drive with footage I would probably never use.

If captured in 4K resolution, even small clips can take up huge amounts of space on the nVME SSD, and given the PS5 only gives you 667.2GB to play with, every bit of storage capacity counts on the next-gen console.

As it launched in the United States and a few other territories across the globe this week, examples have emerged of players switching off the feature to save space. Unless you’re a sucker for documenting every single trophy, we’d recommend doing the same.

How to turn off trophy videos on PS5

Thankfully, switching the feature off only takes a couple of precious seconds. Simply slip into your ‘Capture and Broadcast’ settings and make sure the box that reads ‘Save Trophy Videos’ is unticked. Screenshots take up such a small amount of space that it’s easy enough to leave that aspect of things alone, but if you want that gone too, the option is there. 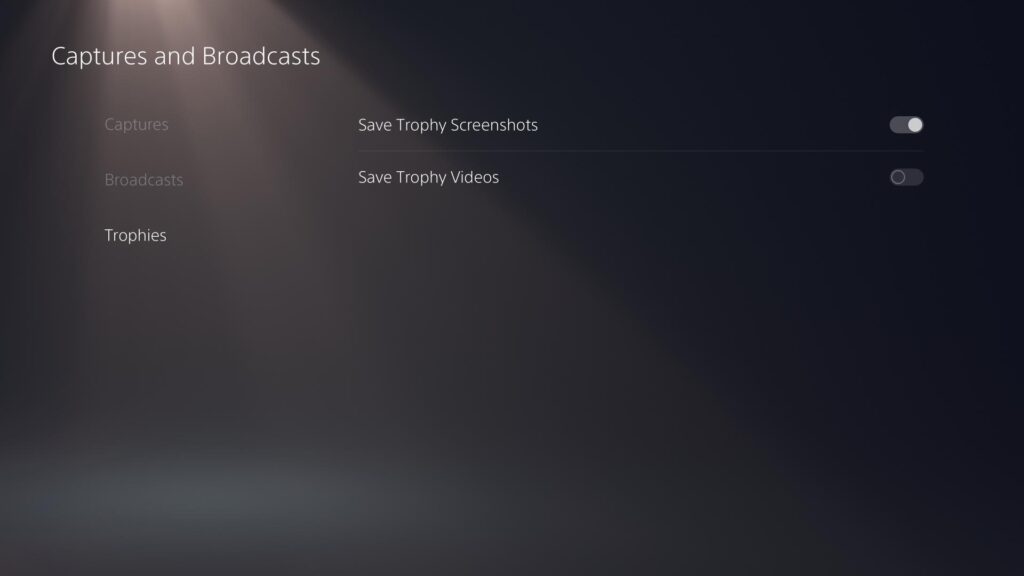 At the time of writing, external SSD storage solutions are not currently supported on the PS5, and it remains unclear when such compatibility will be added. You can connect a standard HDD external drive for storing games and transferring them to the console, but an SSD of equal speed to the PS5’s internal drive is required to play games developed for PS5. Sadly, these are both very expensive and not very common on the market right now.

Here’s what we thought of the PS5 in our 4.5/5 review: “PS5 is a meaningful evolution of Sony’s achievements with its predecessor. It’s a gorgeously accessible machine with a forward-thinking plan for the coming generation, whether that’s through its nuanced SSD technology or growing library of worthwhile exclusives.”

You can also check out what we thought of some of the big launch games such as Marvel’s Spider-Man: Miles Morales and Sackboy: A Big Adventure. We’re still working our way through Demon’s Souls, but the PS5 already has a robust selection of games worth diving into this month, and that’s without mentioning the robust improvements it brings to existing titles thanks to backward compatibility.