Nintendo has uploaded the latest version of its Switch firmware to company servers, and hackers have already been examining the changes on the way.

As revealed on Reddit, the changes are pretty minor and almost exclusively relate to the upcoming Nintendo Switch Online service. The tagline for said service, it seems, is “More Games. More Features. More Fun.”

One of the aforementioned fun features is support for cloud saved games. Anybody who pays the £20-per-year feature will be able to back up their saves to the cloud, which in practice looks like this: 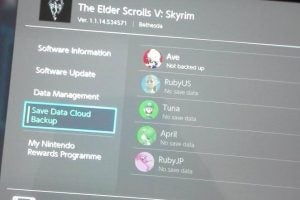 That the update relates primarily to the online service is unsurprising. Nintendo has already revealed that the Switch Online service would be launching in September, so preparing the millions of Switch consoles out there for the big unveiling is only natural.

Beyond cloud saves, we’re told to expect old NES games remastered for online multiplayer, as well as the ability to keep playing the titles that already support online play.

Unfortunately, there’s precious little in there which isn’t related to the upcoming online features. There’s a bunch of new icons from Captain Toad: Treasure Tracker. Two of the Captain himself, two of Toadette, one of Wingo and one of Draggadon. There are also new controller icons for the NES and SNES.

Other than that, it just seems to be security measures designed to keep the Switch safe from hacks that could leave it open to piracy and homebrew software.

Suffice it to say, plenty of users were hoping for a little more. “Just give us f****** folders,” reads one comment on the Reddit thread. “Honestly Nintendo how f****** hard is it to add folders?”

Are you looking forward to Nintendo Switch Online, or do you think Nintendo should be offering more for the money? Let us know what you think on Twitter: @TrustedReviews