After years upon years of waiting, the agonising anticipation of Kingdom Hearts 3 has almost crossed the finish line. Set to launch in just a few weeks, the next chapter in Square Enix’s crossover epic is shaping up to be something quite special indeed.  Having had a taste of what’s on offer, we simply can’t wait to see more.

With the cover art revealed at Tokyo Games Show 2018, Trusted Reviews has compiled everything you need to know about Kingdom Hearts 3 including all the latest news, release date, story, and our hands-on preview.

Kingdom Hearts 3 – Where is our review?

Click here to check our full verdict on the long-awaited Kingdom Hearts 3.

Square Enix has released its post-launch plans for Kingdom Hearts 3 now the release date is almost upon us. It includes an assortment of things, with the most important one being the release of the game’s epilogue shortly after it comes out.

You can check out the detailed post-launch plans below, as translated by fans on the ResetEra forums:

-1.01 patch
-Memory Archive videos (same ones on the Japanese Youtube)

-Epilogue added (To watch the Epilogue, you need to finish the game)

January 31st (same for the West)

-Secret movie added (To watch the Secret movie, you need to finish the game and meet certain requirements. The requirements vary depending on the difficulty you select)

Check out the latest trailer for Kingdom Hearts 3 below. Beware, if you’re looking to go into the game blind, this reveals quite a bit of what you can expect.

Kingdom Hearts 3 Box Art – How does it look?

Alongside the latest trailer from Tokyo Games Show, Square Enix has also revealed the cover art for Kingdom Hearts 3. And, to nobody’s surprise, it’s absolutely gorgeous.

Penned by Tetsuya Nomura, it features all of the main characters staring out to the horizon while perched on a rooftop. Outfits look surprisingly tame for JRPG standards, while the colour palette feels both imaginative and melancholic. Check it out below:

Kingdom Hearts 3 Story – What’s it about?

Taking place after the events of Kingdom Hearts 3D: Dream Drop Distance, Kingdom Hearts 3 once again follows Sora, Donald and Goofy as they travel through a variety of different worlds in their attempt to stop Organizatation XIII’s evil plan. They’re also in pursuit of the Seven Guardians of Light, all of which will help in their eventual attempt to stop Master Xehanort’s evil plans.

Game director Tetsuya Nomura has confirmed that Kingdom Hearts 3 will begin immediately after the ending of Dream Drop Distance, acting as the penultimate chapter in the Dark Seeker Saga. We’d be here all day if we tried to decipher the entire Kingdom Hearts timeline. There have been so many spinoffs, sequels, and side projects at this point it can be difficult to determine where exactly Kingdom Hearts 3 lies in the bigger picture.

We do know that all your favourite characters and worlds will be returning alongside plenty of new ones. Despite plenty of other titles in the timeline, this sequel has been almost 14 years in the making. Kingdom Hearts 3 release date – When is it coming out?

There will be standard and special editions of the game launching alongside one another, something such a widely anticipated release has very much earned.

Kingdom Hearts 3 Gameplay Preview – How does it play?

Although Kingdom Hearts 3 is absolutely a role-playing game, it often feels much closer to an action game to actually play, as we found out when we spent some time with it on the show floor at E3 2018. We got to try out portions of two levels from the game, one based around the characters from Toy Story, and a second set in the world of Disney’s Hercules.

Toy Story’s ‘Toy Box’ level gave us a chance to get acquainted with a typical combat encounter in the game. You’ll spend most of your time using your standard attack against enemies, while every so often using your various special attacks to clear out larger numbers of them at a time.

Each of these special attacks is themed around the different universes featured in Kingdom Hearts. During our time with the game, we saw a spinning teacup attack and a swinging boat themed around famous Disney World attractions. Other special attacks were gained by attacking enemies with a green target sign over them, unlocking alternative special attacks such as throwing the character Goofy at them or bringing in Ralph from Wreck-It Ralph to take out vast numbers of enemies at a time. 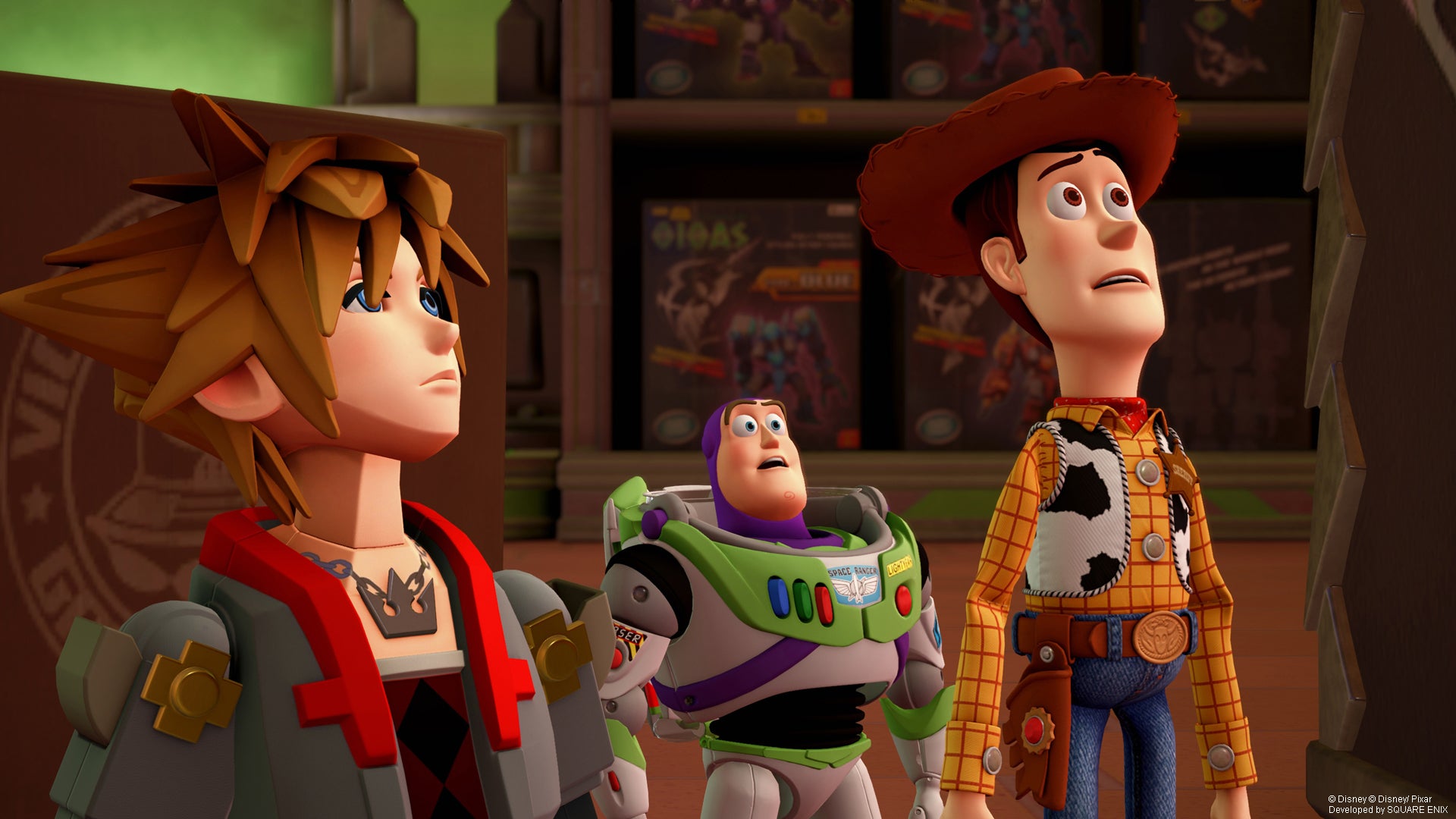 Additionally, you can also switch between different keyblades mid-battle with a quick tap of the D-pad, each of which will then level up to unlock more powerful moves with each successive hit This will play a big part in deeper combat in the finished product.

There’s a lot of different systems to keep track of in Kingdom Hearts 3. Thankfully, it’s fun just to bound around hitting enemies with your standard attack, and you’re going to need to pay close attention to the menu on the bottom left of the screen if you want to get tackle the toughest battles. Here’s hoping for a secret boss or two!

This menu is always active in Kingdom Hearts 3, and you can move around it using the D-pad to access special abilities like spells from the Final Fantasy series (think ‘Curaga’ and ‘Firaga’ for example). It’s possible to spend ages tinkering around in these menus, but thankfully you can access shortcuts with the left bumper in order to save some time when you’re in a sticky situation.

The whole game looks phenomenal, and the Toy Story segment, in particular, manages to surpass the CG masterpieces that inspired them with bright, fluid animations and gorgeous cutscenes. 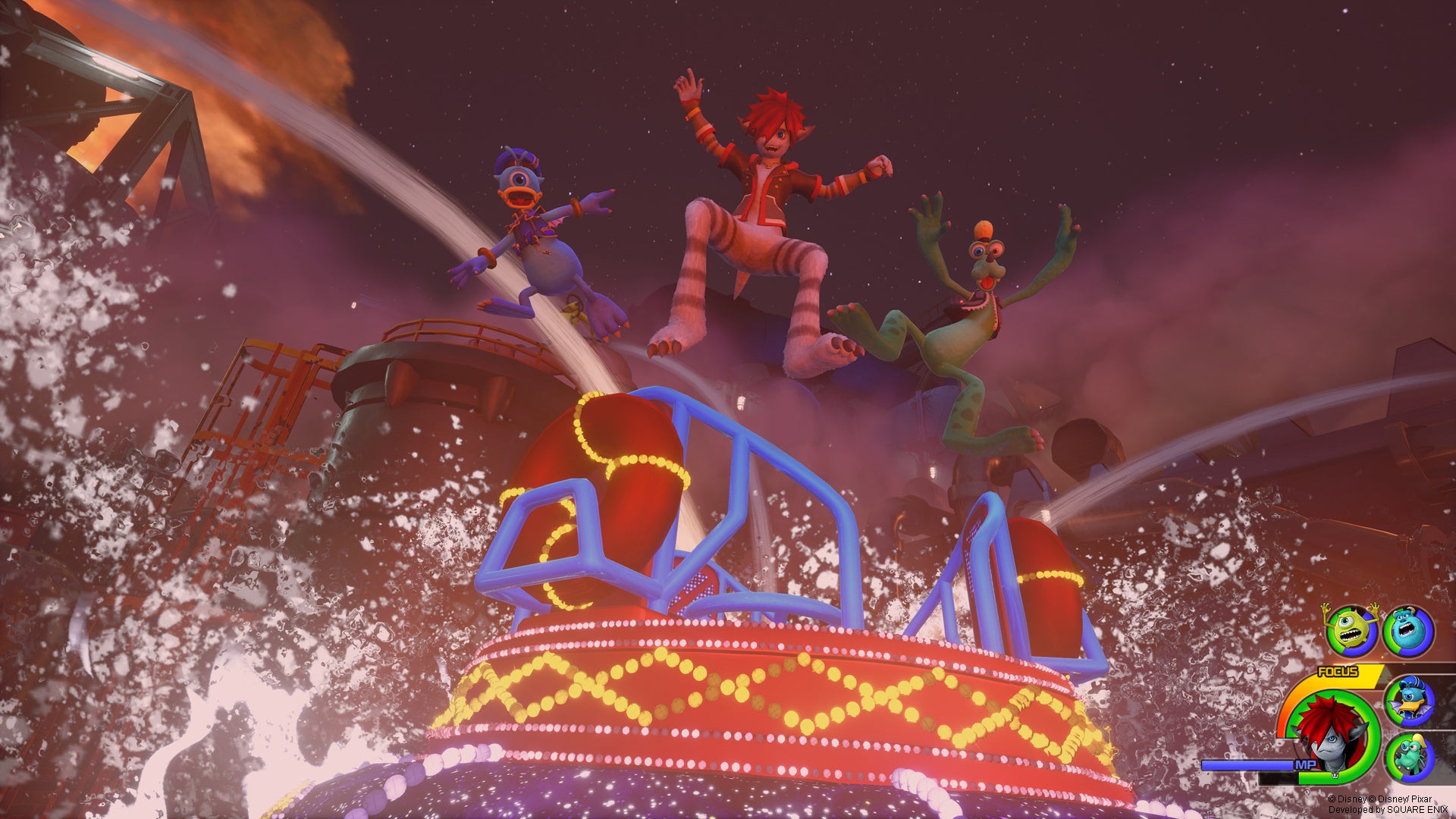 It also helps that the world is an exceptionally faithful recreation of the setting from the movie, with the whole world structured exactly as we remembered from the movie itself. Those looking for a nostalgic goldmine should look no further than Kingdom Hearts 3.

The faithfulness of this recreation dropped off a little bit as we moved into the second half of the Toy Story segment, where we infiltrated a toy shop in order to save a member of our team and faced off against a team of giant (toy) robots.

Thankfully, this decline was offset by some more interesting gameplay ideas, where we were able to pilot these robots as though we were piloting a mech in Titan fall. We shot our way through the rest of the enemies in the level, occasionally hopping out of our improvised mech to take out the smaller, nimbler enemies on foot.

Soon it was time for us to move over to the Hercules-themed level ‘Olympus’. The unique thing about this level was its boss fight, which played like a heavily simplified level from Shadow of the Colossus. 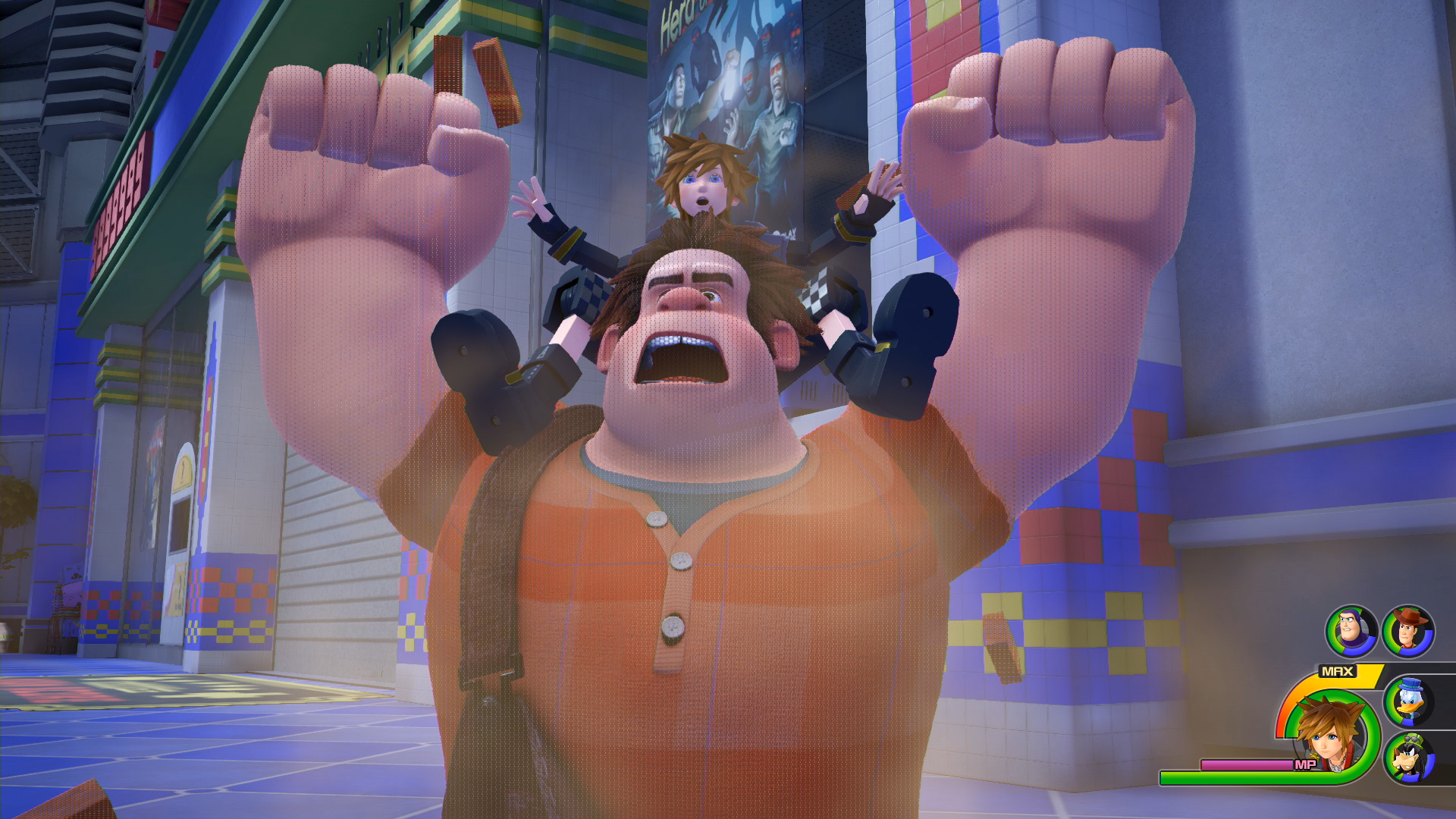 Rather than painstakingly climbing up each of the arms of our gigantic foe, however, Kingdom Hearts 3 simply had us point ourselves at a wall, and run towards it to automatically ascend up to the boss at the top of the mountain.

Although the fight was fairly simple, there were enough different elements at play to keep it interesting as we avoided enemy attacks, held our special attacks in reserve until the best possible moment, and eventually found ourselves in an on-rails shooting segment to finish off the boss.

Because Hercules was a 2D animated movie rather than a CG title, it wasn’t as possible for its representation in Kingdom Hearts to be quite as authentic with it as it was the Toy Story segment, but nevertheless, it felt close to the look and feel of the original movie.

It’s difficult to tell from a demo where you always have the sneaking suspicion that the difficulty might be set to ‘easy’, but we hope that the final game is challenging enough to force players to use all the gameplay systems available.

It felt like there was so much depth in the build that we played, but it was all too easy to tackle all our enemies by repeatedly spamming our standard attacks.

But the game was infinitely more fun when we started to experiment with the advanced move sets, and we hope the final release makes these feel necessary rather than optional. 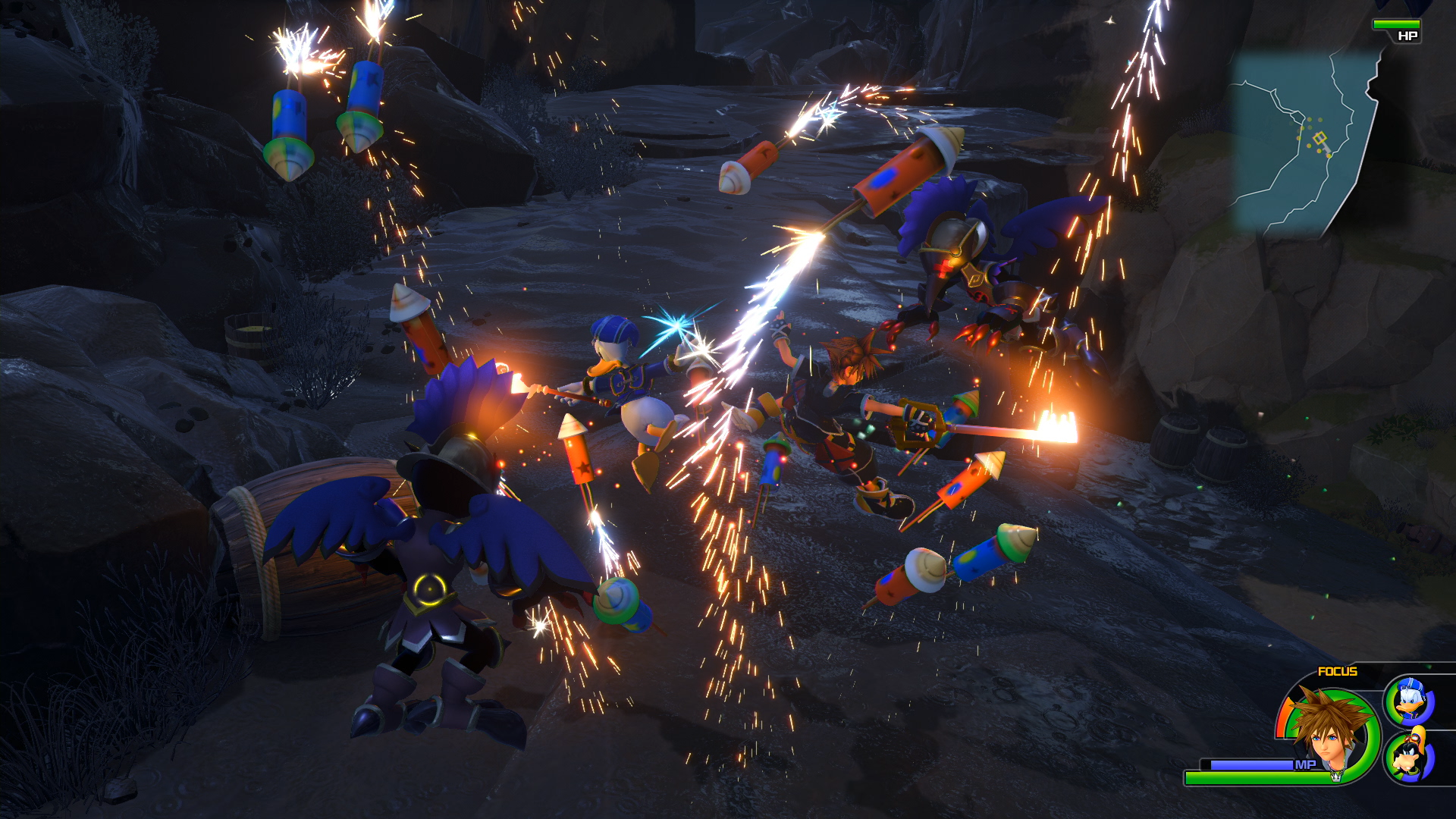 Kingdom Hearts 3 will introduce a number of original locations alongside a slew of Disney-themed locales. Tangled and Big Hero 6 are two of the properties confirmed thus far, with favourites based on Hercules already scheduled to return in the sequel. Since the release of Kingdom Hearts 2, Disney has acquired Marvel, Lucasfilm, and Pixar. Unfortunately, many of these won’t appear in KH3 due to existing licensing deals, such as the agreement concerning Electronic Arts and Star Wars.

To make things easier, we’ve compiled a list of confirmed worlds below:

Now that the game has been announced for years, there have been a number of different trailers that have introduced new characters and locations. Here they all are in one convenient place.