The game has a fascinating concept: new content will be added to the game weekly for the length of The Grand Tour’s third season, with episodic features and videos tied into that week’s episode.

There’s no word on when the game will launch just yet, as The Grand Tour is still filming its third season. The show is hosted by Jeremy Clarkson, Richard Hammond and James May after the trio departed the BBC’s flagship car program Top Gear.

No video game has ever really tried to keep pace with a television show before, ignoring experiments like Defiance, which served up a game and TV series in the same universe but didn’t attempt synchronicity. The new content will take the form of challenges based upon the series, meaning that if Clarkson and his pals drive a supercar, you’ll drive a supercar. If they instead, say, drag race forklift trucks… it’s time to start working on your forklift license.

Tying these challenges together are video segments from the show and original voice work from the three presenters. Honestly, as a concept, this is one of the most innovative things I’ve seen at Gamescom.

Unfortunately, the build I saw is pretty bad.

The Grand Tour The Game is bad in two different ways. On a technical level, the game – which in fairness is still very early access – is technically bad. Cars handle weirdly, the game looks aged, and the physics are bizarre. In the game’s four-player split-screen multiplayer, our playtest devolved into four players crashing into each other like bumper cars. The entire race was a farce of cars spinning and turning as they crumpled into each other.

The single player experience was also lacking somewhat. I played three segments inspired by the first episode of The Grand Tour, including a race against May and Hammond through the desert, a time trial and, last and by all means least, a segment where I had to stop Hammond crapping his pants.  I earned a single poo emoji – seriously – each time I left the road or bumped into something. Hammond would let out a canned Bark talking about how he’d pooed in a variety of ways with every mistake. 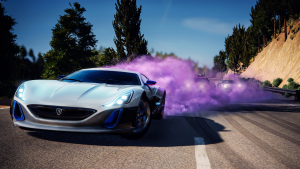 There were no time restraints, meaning technically the way to be most successful at the game was to keep the car going forwards at a crawl and nudge my way to the finish line.

I didn’t do that of course, razzing it around the track like a teenager in a Halfords car-park. Perhaps I was just distracted by the whole poo thing. I got six poo emojis.

The second way the game is bad is the certain type of nonsensical misanthropy that runs at the core of The Grand Tour. If you’re a fan of the show, this won’t grate on you, but there’s something about the forced banter that seeps into every part of the game that leaves me cold. Yes, the poo thing again, but there’s also the way that one of the multiplayer power-ups in the game is called Texting, where you send a hilarious text to any nearby drivers that fills their screen and forces them to crash. These sort of thing is probably amusing to fans of The Grand Tour, but if you’re a fan of games, you can do better.

This feels like a cynical cash-in, and while I want the concept to succeed, it’s a tough sell to ask punters to buy into the game solely to drive similar challenges to the one’s airing on The Grand Tour each week. From what I’ve seen it’s not worth playing this game only to hear Clarkson scream a few voice lines every time the terrible handling tosses you into a hedge.

The game isn’t finished yet, and this early build may not be indicative of the final quality, but at the moment there’s an excellent concept here that has absolutely no other redeeming features.

The Grand Tour will launch on PS4 and Xbox One at an unspecified point in the future.

Do you like The Grand Tour enough to give its tie-in game a shot? Let us know @TrustedReviews.