Fallout has always thrived on the desolate loneliness at the heart of its worlds. Whether its the melancholic greens of The Capital Wasteland or New Vegas’ scorching, radioactive sands, the player controlled a lone wanderer in a place begging to be discovered.

This is still true with West Virginia in Fallout 76, but the personality has been lessened in favour of mute spectres walking alongside you. But these aren’t characters, but other players devoid of personality as they chase after the same generic quest objectives.

It’s still capable of impressive immersion and rewarding character customisation, but the message behind the original Fallout has been buried under an online experience far more interested in chasing trends than having something to say. 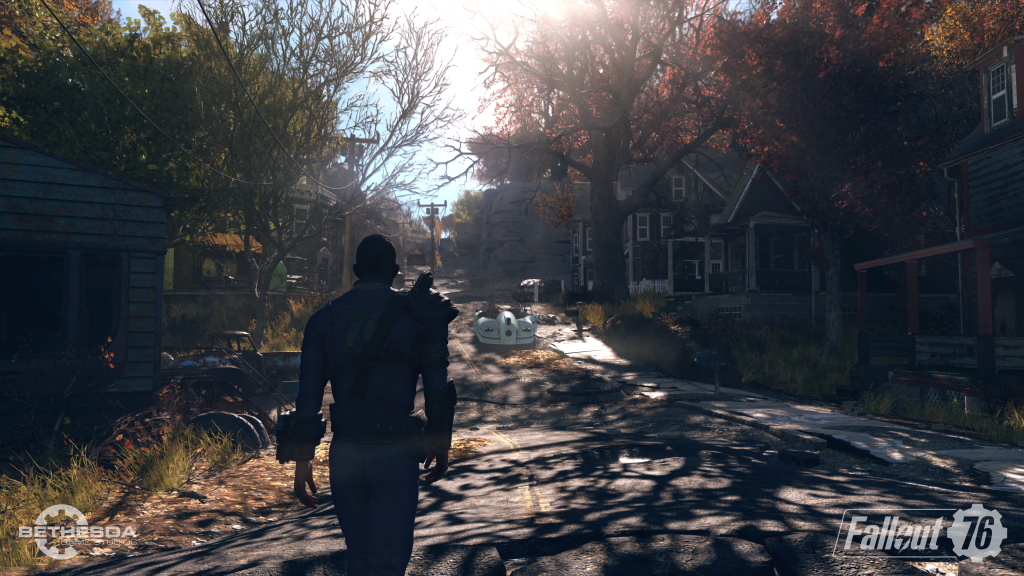 This past weekend saw one of several Fallout 76 beta sessions taking place on Xbox One, providing players a total of four hours to dig into Bethesda’s upcoming online RPG. Starting right from the beginning, you’re a newly awakened occupant of Vault 76, the very first vault to open after the nuclear apocalypse.

It begins much like Fallout 3 and 4 before it as you’re walking through a long-abandoned vault, filled with amenities designed to help humanity thrive but remain unused. Well, it’s meant to be like that, but Fallout 76 sacrifices much of its atmosphere to shuffle you out the door in a matter of minutes.

You’re given a number of items to help you survive in the wasteland such as food and water to maintain hunger gauges and other busywork. Among these is C.A.M.P, a new piece of technology to help you construct buildings and items in the same way as Fallout 4’s settlement mechanics.

It’s intuitively introduced, but the smiling Vault Boy on the screen is a hollow substitute for personality. Players began appearing as I approach the Vault’s exit. Predictably, their first instinct was to sprint up to me and begin punching me in the face, tearing away any immersion I could have in a world I was yet to step into.

It’s a shame, because West Virginia is a vast and beautiful place somewhat untouched by nuclear devastation. Country roads are awash with vegetation, a wonderfully stark contrast to the wrecked restaurants and facilities scattered across the opening area. One of the most notable omissions in Fallout 76 is the distinct lack of NPCs. You’re the first people to settle in this new world with the exception of robot merchants scattered around the place. They exist to sell you items and deliver quests, with lore designated to letters and audio logs you’ll find through exploration.

The first few quests are small ventures across West Virginia as you sign up as a “Responder” and test various water samples before eventually manning your first settlement. An introduction that could have featured players working alongside one another turns into a grim exercise of tedium as voiceless avatars scurry about the place like ants.

My usual experience for missions in the opening hours saw me moving from one location to the next, occasionally bumping into other players awkwardly bumbling around like I was. I can see this coming alive in later levels as players band together to take on rival factions across West Virginia, but now, it feels oddly unfinished.

Aside from the lack of meaningful questing, characters and atmosphere, West Virginia is still a curious joy to uncover. It’s vast, with locations brimming with contextual importance and imagination. Delving into the Nuka Cola Factory and coming across oodles of fizzy drinks and loot was rewarding, and echoes what I love about past instalments. Bethesda has incorporated live events in a similar vein to Destiny 2, where you and a few nearby players in the shared world must defend objectives from hordes of enemies. These are fun little instances, but the gunplay lacks the speed and finesse required for teamwork to feel worthwhile.

For example, dispatching groups of enemies devolved into endless grenade spamming until everything stopped moving. It becomes a laughable mixture of unintentional and clumsy mechanics that simply don’t feel built for a fully-fledged multiplayer venture. There’s a charm to it, but how this plays out in the full release remains unclear.

Upon the beta’s conclusion, I had crafted a small shelter for myself consisting of a few wooden planks, a sleeping bag, and a fireplace. It felt homely despite the apocalyptic nasties shifting all around me. But no players passed me, echoing a lonely feeling of dissatisfaction as opposed to what Bethesda presumably wants to convey.

I imagine teaming up with a group of dedicated friends is where Fallout 76 comes alive. Commenting on the silly (and occasionally buggy) happenings of West Virginia as you embark on quests and deal out loot. The new perk card system also feels suited to this, with each squad member possessing abilities to compliment the overall team. To put it bluntly, don’t go in expecting a satisfying solo experience.

The jury is still out on Fallout 76, and I’m hopeful it has ample surprises in store with how players work together and the world of West Virginia opens up after the pile of tutorials I had to wade through. For now, it’s a former shell of what made Fallout so special in the first place. War never changes, but Fallout certainly has.

Fallout 76 launches for PS4, Xbox One and PC on November 14. Did you have a chance to try out the beta? Let us know on Facebook and Twitter @trustedreviews.