Capcom has announced that Devil May Cry 5 will be slicing its way onto consoles and PC in March 2019, and recent trailers have provided us with a detailed look at the stylish hack ‘n’ slasher. Acting as a sequel to Devil May Cry 4, this is a sequel fans have been patiently waiting almost a decade for. It will see the return of Dante, Nero and a newcomer called V as they seek out demons to slay in the most badass manner possible.

It feels so good to have Capcom’s golden child back and ready to kick some ass. Trusted Reviews has compiled everything you need to know about Devil May Cry 5 including all the latest news, trailers, gameplay preview and more.

Devil May Cry 5 release date – when is it coming out?

Devil May Cry 5 Story – What’s it about?

Taking place a few years after the events of Devil May Cry 4 and Devil May Cry 2, this fifth instalments follow Nero as he runs his own branch of the demon-slaying organisation in the confines of Red Grave City. Our hero finds himself having to fend off demons once as an ancient tree takes root in the city centre. Inevitably, it ends up spawning all sorts of nasties for the demon slayer to deal with. Dante, on the other hand, still finds himself stranded in the demon world and must fight his way out.

Nero is chasing after his Devil Bringer, his magical arm which has been stolen by a mysterious figure who will seemingly play a large role in the plot. Nico, a friend of Nero’s, will be present to provide you with customisable upgrades and general tips as the young and rebellious hunter goes off and does his thing. It remains unclear what sort of part V will play in the overall story, as he’s a relative newcomer to the series.

Capcom has announced that a playable demo for Devil May Cry 5 is coming to PS4 and Xbox One on February 7, 2018. It remains unconfirmed if it will feature all the same content from the previous demo, or if players can look forward to a completely unique section to experience next month. Fingers crossed, as we’d love to see both of them!

Devil May Cry 5 trailers – How does it look?

You can check out the latest trailer for Devil May Cry 5 below, showcasing new characters, combat and other gnarly stuff:

Capcom’s Devil May Cry series is finally back! While I was one of the rare fans who enjoyed Ninja Theory’s DmC reboot back in 2013, it failed to capture the original series’ spirit with its foul-mouthed Dante and borderline obsessive relationship with dubstep.

Now, I love a good banger, but this wasn’t the aesthetic I’d come to expect from the beloved action franchise. This all changes with Devil May Cry 5, a direct sequel to the fourth instalment that knows exactly what it’s doing in terms of story, style and being an absolute badass.

My demo begins as Nero and business partner/crafty engineer Nico stroll into a devastated London aboard a rusty old van with ‘Devil May Cry’ scorned across the side in bright, fluorescent neon. It’s clear from the first few seconds that DMC is back, and it’s ready to let you know it. 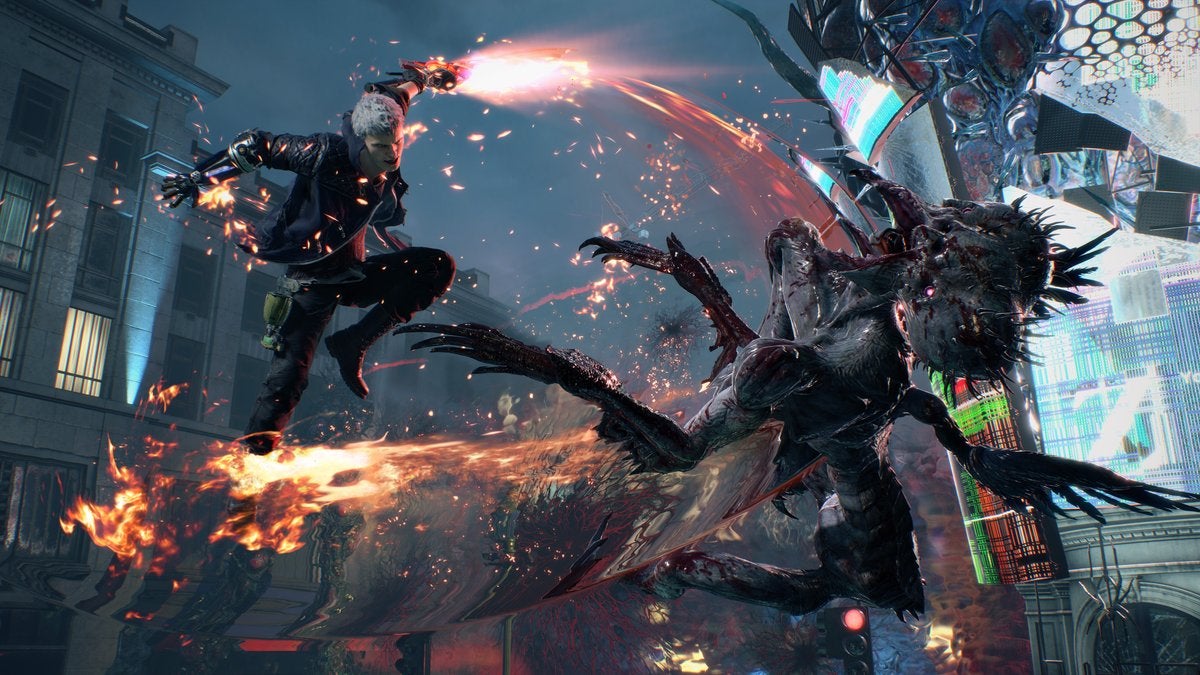 After dropping you off, Nero is thrown straight into the action. London has been devastated, with demon running amok amongst the almost non-existent, post-brexit population. Obviously, being demons, they hone in on Nero in seconds, meaning it’s time for a fight. This is where Devil May Cry 5’s most innovative new feature comes in: Devil Breaker.

This is Nero’s arm and can be detached and customised to your liking with an array of gnarly powers. Pressing the circle button elicits a small punch, but holding it is an entirely different story. When I did so, Nero threw a horrendously hard punch before his arm spewed forth a constant beam of energy that dealt absurd amounts of damage.

It looks amazing, too, solidifying how drastic a visual makeover Devil May Cry has received. The brief demo allowed me to switch between a handful of different Devil Breakers, so I imagine deeper equipment management is waiting in the wings. Nero can also use his artificial limb to fly toward enemies or the exact opposite, launching across the environment at ludicrous speed. It already feels amazing to play, and that’s with only three weapons at your disposal.

Of course, Nero’s Red Queen (Sword) and Blue Rose (Revolver) make a well-deserved return and have also been gifted a scandalous redesign that helps his character pop all the more. They’re heavy and satisfying to use, and indicate that Devil May Cry 5 is aiming to make combat feel weightier and more consequential than previous entries. Sending enemies back to the depths they came from is a blast, especially when they look so horrific.

Upgrades and customisation are confirmed and will be handled by Nico and her trusty transit van, which can seemingly appear at certain points in the world to help Nero stock up on the fly. I’m crossing my fingers for unlockable bonus costumes, which have long been a staple of the Capcom library. Perhaps a cheeky crossover with Resident Evil 2 Remake is in order? 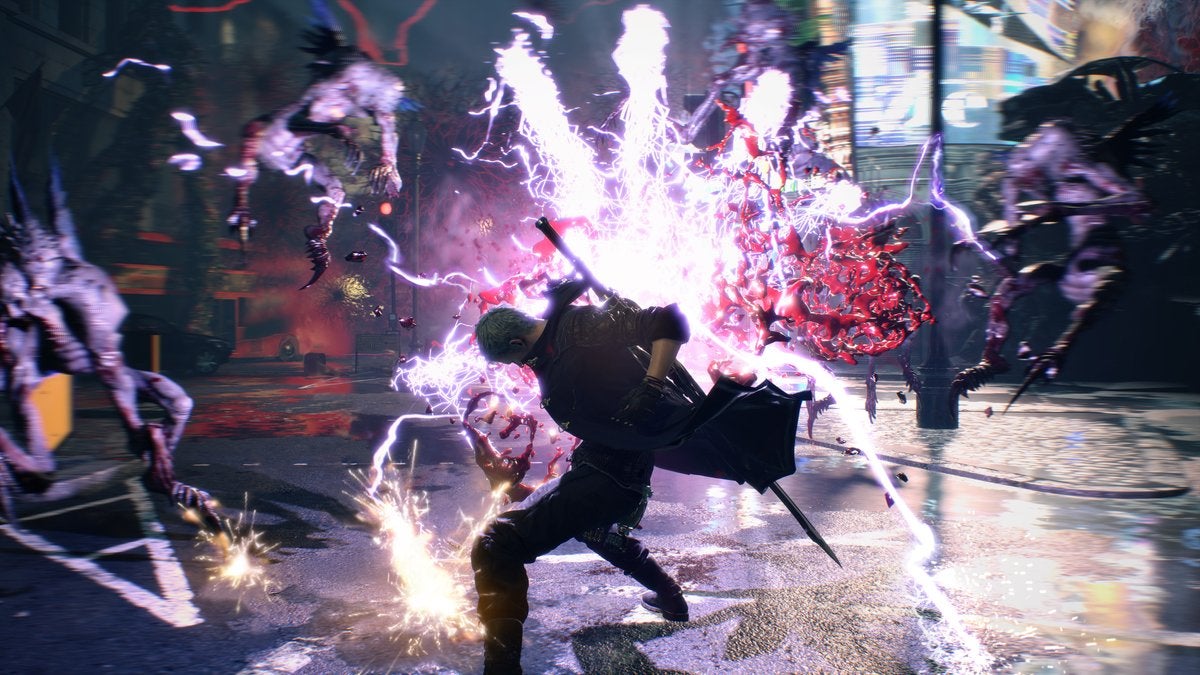 Upon scouring through the streets of London, Nero is greeted by a huge, demonic tree made of seemingly organic material. It looms ominously over the city, and is most definitely our hero’s objective. It needs to be stopped, and he’s happy to murder thousands of demons to make that happen. This includes boss encounters such as the grotesque ‘Incandescent Goliath.’

That’s not only a strong name, but also proved to be a formidable tussle that I escaped from unscathed. When a monster swallows up the world around you and fires it out of his belly as a flaming projectile, you know he isn’t messing around. I was initially concerned that Devil May Cry 5’s grounded visual style would clash with its more outlandish elements, but that definitely isn’t the case.

Recent trailers confirmed that Devil May Cry 5 will launch three playable characters: Nero, Dante and an unnamed third, who could end up being Vergil, who most recently appeared as a major villain in Devil May Cry 3. A trio of playable faces promises plenty of variety and room for experimentation, a saving grace as the game’s combat system encourages and rewards you for mixing up fighting styles whenever possible.

Devil May Cry 5 is a glorious return for the outrageous action series, showcasing all the important hallmarks while pushing the boundaries of what we expect from it.

Nero controls with a demonic grace that has me itching to slay a bunch of demons, it’s just a shame we’ll have to wait until March 2018 to take the reigns as some of the world’s greatest demon hunters.